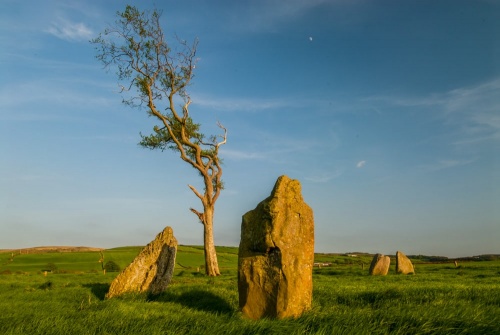 Standing in a farm field southeast of St Colmac Cottages and just east of Ettrick Bay stands a late Neolithic or early Bronze Age stone circle of seven stones, though there may have originally been more. The stones are set within a circular bank enclosing an old beech plantation. An eighth stone stands immediately south of the circle.

Only four stones forming the circle still stand upright. Another three are now only stumps, though whether they were originally taller or not is unclear. The circle has an inner diameter of 13m (about 43 feet). 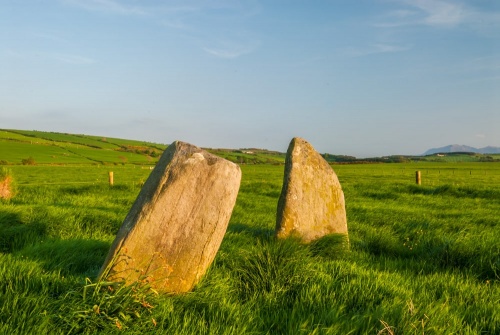 A pair of standing stones

The beech plantation, of which only two trees remain, is enclosed by a circular bank approximately 33m (108 feet) across.

It is interesting to read the accounts of 19th-century antiquarians who first recorded the stone circle. They called it a druid's temple surrounded by a grove of trees. We now know, of course, that stone circles had nothing to do with the druids, who came several thousand years later.

An antiquarian writing in 1819 records that there was once a second stone circle 25 yards (23m) west of the existing one. This was blown up in the first decade of the 19th century. There's no record of why it was destroyed.

a geophysical investigation of the site in 2011 found signs of what may have been a rectangular Christian chapel close to the stone circle, measuring 11m x 8m and orientated on a North-South axis. 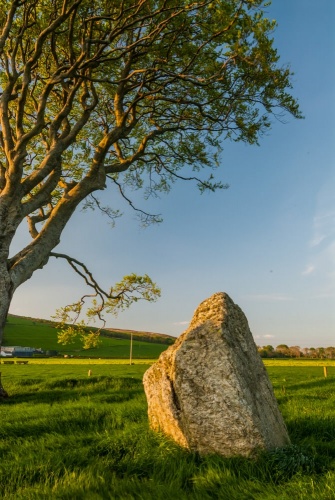 Finding St Colmac Cottages Stone Circle is straightforward. The stones are easy to spot while approaching from the east along the B875 road from Port Bannatyne. They lie roughly 130m (430 feet) southeast of St Colmac Cottages at NS044668.

There is no signpost, nor any designated parking, but we found it easy to park along the verge. Please be aware that the stones are in a farm field. Good footwear is advisable, and be sure to close gates behind you with care!

If you don't fancy the easy walk into the field, you can get a very good look from the road.

Note: You will sometimes see this stone circle referred to as St Colmac's Stone Circle or Ettrick Bay Stone Circle. I'm not sure there is an official designation, but the Canmore record (National Record of the Historic Environment) uses St Colmac Cottages Stone Circle so we've gone with that.

Nearby accommodation is calculated 'as the crow flies' from St Colmac Cottages Stone Circle. 'Nearest' may involve a long drive up and down glens or, if you are near the coast, may include a ferry ride! Please check the property map to make sure the location is right for you.