HERITAGE HIGHLIGHTS:   Used as a training site for the D-Day landings. 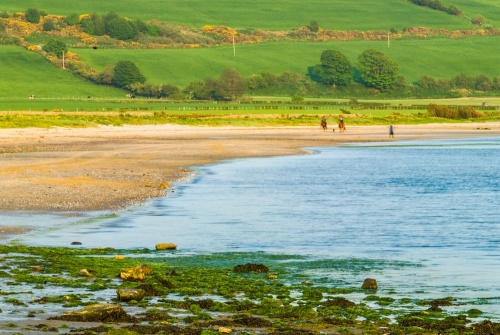 Ettrick Bay is a beautiful coastal bay with a broad, sandy beach, located on the less-populated west coast of Bute, about 2.5 miles (4km) from Rothesay by car. The bay stretches for one mile (2.2km) in a north/south direction and is separated from the Cowal peninsula to the west by the Kyles of Bute channel.

The shore that lines Ettrick Bay has a shingle foreshore leading down to a wide, sandy beach where you can sometimes see horseback riders exercising their mounts. The beach is very popular with visitors and locals alike. The water is clear and clean, and is regularly monitored.

Near the northern end of the bay is the Ettrick Bay Tea Room, offering refreshments, toilets, a children's play area, and a picnic area as well as a small campsite.

Aside from the tea room, there are several lay-bys along the bay offering easy, free parking. 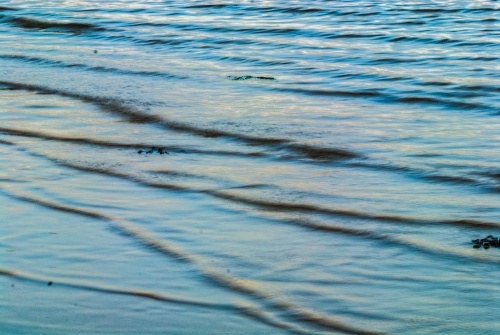 Waves on the beach at Ettrick Bay

At the southern end of Ettrick Bay is a bird hide, offering a protected view of water birds and waders.

To the north, a minor road leads up the coast to Glecknabae, where trails lead to prehistoric burial cairns at Cairnbaan and Kilmichael. Near the Kilmichael cairn is an early Christian chapel thought to date to the 6th century.

Be aware that there are no visitor facilities at Ettrick Bay (beyond the tearoom), but it is one of our favourite places to relax and enjoy nature on Bute.

You can reach Ettrick Bay on the B875 (northern end) or A844 (southern end) from Rothesay.

Nearby accommodation is calculated 'as the crow flies' from Ettrick Bay. 'Nearest' may involve a long drive up and down glens or, if you are near the coast, may include a ferry ride! Please check the property map to make sure the location is right for you.