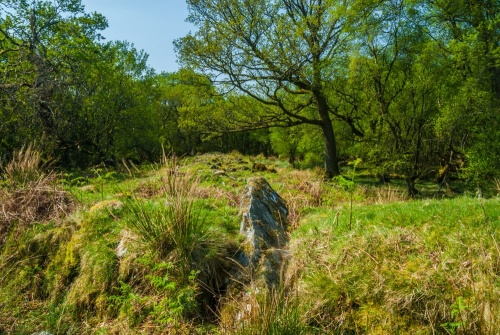 Tucked away in the northeast corner of the South Wood of Lenihuline forest, in the northwestern corner of the Isle of Bute, is a chambered cairn of the Clyde type, known variously as Carnbaan, Cairnbaan, Cairn Ban, and Cairn Baan. Whatever the exact spelling, the meaning is the same; 'carn ban' in its different forms translates as 'white cairn'.

The well-preserved burial cairn measures roughly 53m long, on a NE-SW axis, and lies across the slope of a hill. It is 9m wide at its widest point, and up to 1.2m high. Somewhat unusually, there are burial chambers at both ends of the cairn, and another set into the SE side. Nineteenth-century archaeologists suggest that there may have been other lateral chambers. 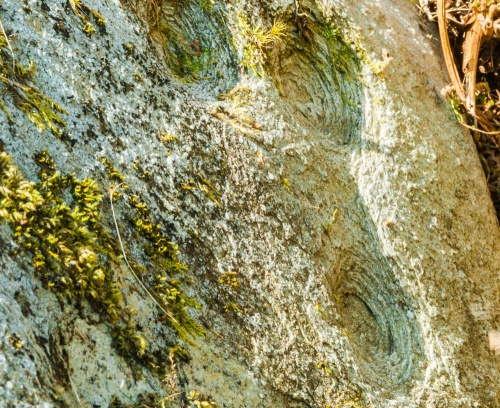 Cup marks on an upright stone

The best-preserved burial chamber is at the SW end, which still has its capstone in place. This chamber measures 1m x 1.5m and is 1.0m high. At the opposite end of the cairn (the NE), the chamber has been partly destroyed by a later stone dyke that cuts across the cairn. It measures roughly 1.4m x 0.8m and 0.7m high.

The remaining chamber, in the SE side of the cairn, is 1.4m x 0.7m and is 0.8m high. The original capstone has fallen or has been removed, and it now lies on the ground just south of the chamber. 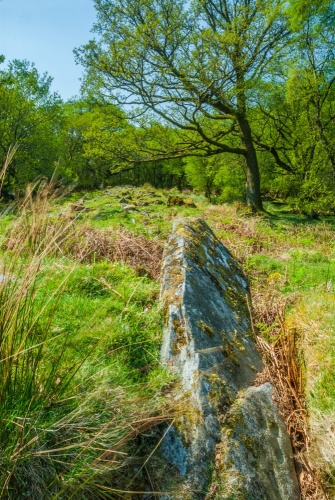 Looking northeast along the cairn

The Cairnbaan cairn probably dates to the Neolithic period (the New Stone Age), which covers a huge range of dates from 4500-2200 BC.

The cairn was made of rounded boulders but has been very disturbed over the centuries and many stones have been removed, masking the contours of the cairn hard to discern in places, but you will have no trouble at all finding the burial chambers. 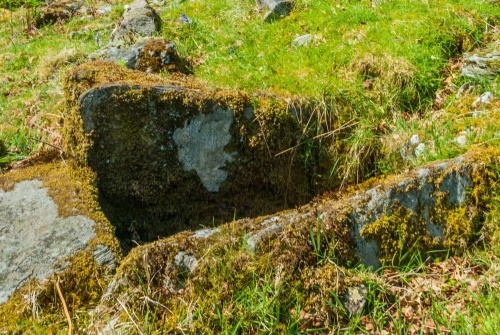 Take the B875 to Ettrick Bay and stay on it as it becomes a minor road with passing places leading north along the coast towards Glecknabae. The road ends in a wide parking area at Glecknabae. From here you are on foot.

At the northern end of this parking area the paved path now just a single vehicle's width, continues along the coast towards South Wood of Lenihuline. It is just under 1km top the woodland, where an obvious path leads off to the right into the woods. Just follow this path for approximately 700m and you will arrive at the chambered cairn. 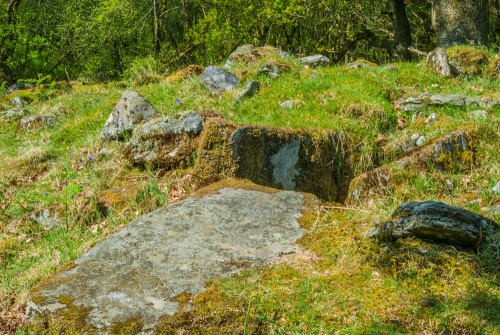 Another look at the south-east burial chamber

I found what appear to be very clear cup marks on one of the large stones at Cairnbaan (see photo), though there is no mention of a cup-and-ring marked stone in the official Canmore listing for the site.

I highly recommend continuing your walk up the lane to the remains of another chambered cairn and ruined chapel at Kilmichael, roughly 2km further on.

Note
Do not mistake Cairnbaan Chambered Cairn on Bute with the similarly named Carn Ban prehistoric site on Arran or the Cairnbaan tomb near Benderloch in Argyll. Just to confuse things, this site on Bute is shown as Cairn Ban on Ordnance Survey maps.

About Cairnbaan Chambered Cairn, Lenihuline
Address: South Wood of Lenuhuline, Glecknabae, Glecknabae, Bute, Argyll and Bute, Scotland
Attraction Type: Prehistoric Site
Location: Follow the B844 west until it turns into an unnamed single-track lane with passing places. At the end of the lane is a parking area and a clear path leads through woodland to the cairn.
Website: Cairnbaan Chambered Cairn, Lenihuline
Location map
OS: NS006693
Photo Credit: David Ross and Britain Express

Nearby accommodation is calculated 'as the crow flies' from Cairnbaan Chambered Cairn. 'Nearest' may involve a long drive up and down glens or, if you are near the coast, may include a ferry ride! Please check the property map to make sure the location is right for you.