HERITAGE HIGHLIGHTS:   One of the best preserved early medieval castles in Scotland 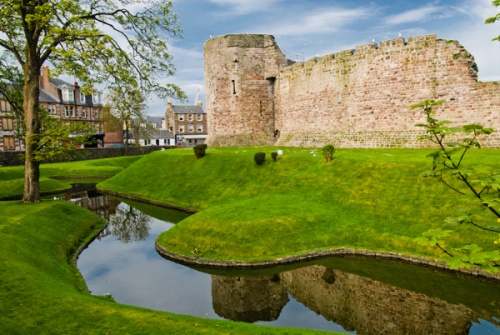 One of the finest early medieval castles in Scotland, Rothesay Castle has seen dramatic sieges and the rise and fall of kingdoms. It has been a wooden Norse fortress, a Scottish stone keep, an English possession, and a royal Scottish fortress.

In the early medieval period, much of western Scotland and the isles were part of a vast Norse kingdom that included Norway, the Hebrides, and the Isle of Man. About 1098 a Norse king by the name of Magnus Barelegs built a wooden castle here, on a rise of ground above Rothesay Bay. The bay provided a natural anchorage for Norse vessels, but the castle site at first glance has no obvious defensive promise.

About 1200 William the Lion seized the Firth of Clyde from the Norse, and the king's hereditary Steward, Walter, began to replace the wooden castle with the superb stone fortress, almost entirely circular in plan, that we can see today. Walter was the 3rd High Steward of Scotland, a post that evolved into a family name, a dynasty, and eventually, into a royal line that is with us today.

The stone keep erected by Walter had a wet moat fed by a small burn flowing out of Loch Fad. The medieval engineers knew their business, for the moat system still works to this day.

But the Scots were not to enjoy control of Bute for long. In 1230 Norse under Uspak, King of Man and the Isles, besieged Rothesay Castle for three days. The defenders poured boiling pitch and molten lead over the walls, but the Norse attackers built a shield of wood to protect their heads and cut through the soft stone walls with their axes.

Walter Steward was killed by an arrow, and the Norse took the castle. They could not hold it, however, and retreated after looting and exacting a ransom of 300 silver marks. 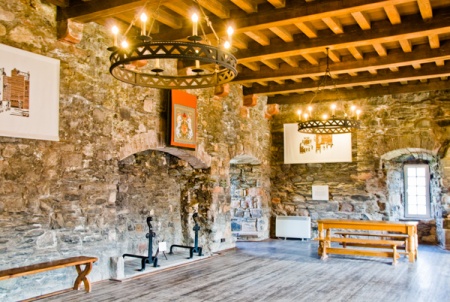 Inside the castle gatehouse

The Norse were back in 1263 under Haakon IV, in the last serious attempt by the Norse to wrest back control of western Scotland. Haakon's attempts failed, however, and he retreated after an inconclusive naval engagement at Largs, leaving his son Magnus to formally cede Bute and all Norse Hebridean territories to Alexander III of Scotland.

Rothesay was in Scottish hands until the Scottish Wars of Independence when the English were able to seize control several times. Edward I took control in the 1290s, but the Scots retook Rothesay in 1306 after a naval attack led by Sir Robert Boyd of Cunningham.

The English retook Rothesay briefly after the Battle of Halidon Hill in 1333. After the death of David II in 1371 the crown passed to Robert Stewart, the first Stewart king, and Rothesay Castle became a royal residence.

But we're getting ahead of ourselves; throughout the 13th century, Rothesay Castle was strengthened and enlarged. Four huge drum towers were added, projecting from the perimeter wall to allow a better angle of fire for archers on the walls. In terms of military defences, Rothesay had all the 'mod cons' of the day.

These changes necessitated reshaping the moat to a rectilinear plan. Around 1498 James IV granted Rothesay to Ninian Stewart as a hereditary keeper.

The great gatehouse was begun shortly after, but it was not to be complete until sometime after 1541, in the reign of James V. The gatehouse was more than simply a powerful defensive structure; it contained luxurious living quarters, with a comfortable great hall with a large fireplace and window seats, with private quarters and an oratory on the second floor. Within the main castle structure a chapel, dedicated to St Michael, was added. 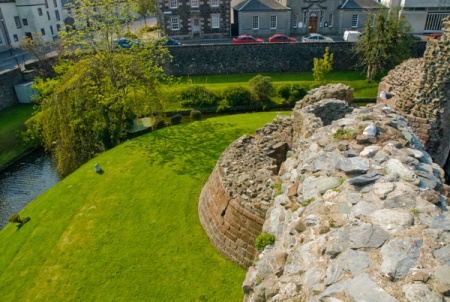 The view from the castle wall

The next few centuries saw a series of sieges by the English, who returned in 1462, 1527, and 1544. But the final blows were to fall in the mid-17th century; in the 1650s Oliver Cromwell's men inflicted heavy damage, and in 1685 the Earl of Argyll and his Covenanter army burned the castle, inflicting heavy damage.

Rothesay Castle was restored by the 3rd Marquess of Bute in 1872 and 1879. Though the castle was formally placed under state control in 1951 and is now operated by Historic Scotland, the hereditary keepership of the castle remains in the Stuart family. The gatehouse contains displays on the castle's long history and its owners.

Today the outer walls of the castle are relatively intact and create a wonderfully romantic medieval sight. Within the castle walls, all is not quite so well-preserved, however, but you can mount to the top of the walls in places, for excellent views across Rothesay. The circular walls are unique among Scottish castles.

Being an avid photographer and knowing the castle was generally floodlit after dark, I was keen to photograph the castle illuminated at night, so I set up my tripod outside the fence and waited while the sun went down.

Just as it got dark and the floodlights came on, a rather inebriated young chap came out of a nearby house and wandered over to see what I was doing. Semi-seriously he asked if I had managed to take any shots of the Green Lady.

'Green Lady?' I said, intrigued despite myself.

He told me that a ghostly green figure had been reported by numerous people, around the top of the parapet and the tower. He didn't know any more about the legend, and after a time he wandered off, leaving me to photograph in peace. I kept one eye out for any sort of mysterious green glow, but I saw nothing out of the ordinary save for a wonderfully atmospheric historic castle illuminated by floodlights!

A bit of research unearthed several versions of the story. Apparently, during one of the numerous Norse raids on Rothesay, they were going to force a particular young lady named Isobel to marry a Norse king. Rather than marry the king, she chose to throw herself down the stairs behind the chapel and so died. Ever since her ghost is said to haunt the castle, and the stair is known to this day as the Bloody Stair.

Another version says that she stabbed herself to death rather than marry a Viking who had killed her family. Green must be a popular colour for ghosts, as one of Scotland's most famous ghosts is another Green lady, but one that haunts Crathes Castle, in Aberdeenshire. There is also a Welsh Green Lady at Caerphilly Castle, Glamorgan.

I loved visiting the castle; it is a bit odd in that the site is surrounded by terraced houses, but the lovely, curving moat, with swans swimming along peacefully, does create a terrific atmosphere. 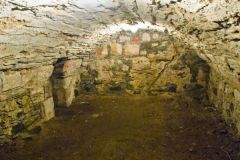 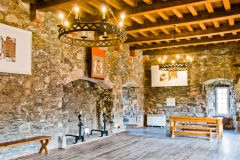 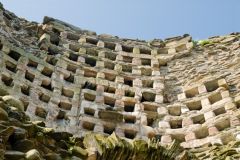 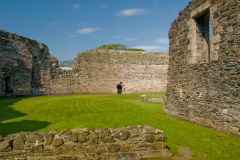 Nearby accommodation is calculated 'as the crow flies' from Rothesay Castle. 'Nearest' may involve a long drive up and down glens or, if you are near the coast, may include a ferry ride! Please check the property map to make sure the location is right for you.

More self catering near Rothesay Castle