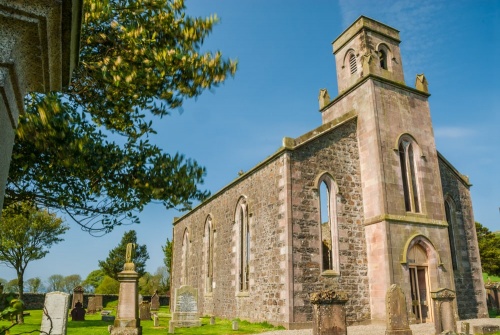 Standing beside the B875 a few miles west of Port Bannatyne, immediately west of the North Bute Cemetery, are the roofless ruins of a 19th-century Neo-Gothic church begun around 1836 by the 2nd Marquess of Bute, possibly to a design by architect James Dempster. Eight years later in 1846, St Colmac's Church became the North Bute Parish Church.

The church and nearby manse were built at the same time, for a combined cost of £6,000.

Unusually for the time, the design retained a long communion pew with bench seating. 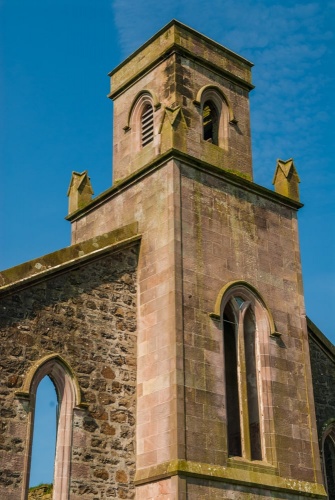 When the free churches of Scotland merged in 1929 the church name was altered to St Colmac's.

Gradual depopulation and a lack of funds to maintain the deteriorating building led to the church's closure in 1980 and the roof was removed shortly after. It now stands as a shell immediately north of the road. In 2007 an application was made to convert the church shell into a dwelling, but this application was later withdrawn.

The church is surrounded by a large burial ground dotted with an impressive array of 19th and 20th-century memorials. In the burial ground are buried seven seamen who lost their lives when their ship was torpedoed in Rothesay Bay in the early days of the war. This incident is mentioned online in only one source, and I've been unable to find out more details. 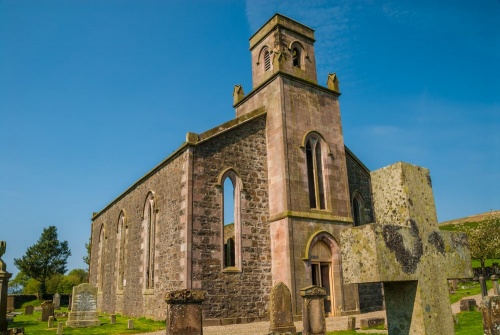 The church from the east

The design is intriguing; it is three bays long and two stages high, with a striking three-stage belfry tower at the east end. Almost none of the original opaque glazing remains.

Immediately across the road is the Cnoc an Rath circular earthwork, and 800m west at East Colmac Farm is the early medieval cross slab known as the St Colmac Cross. 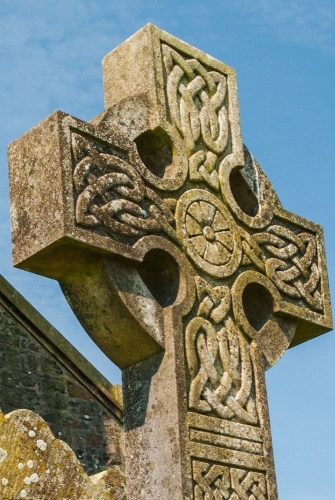 Celtic-style cross in the churchyard

The church is approximately 300m west of the junction of the A844 and B875, on the northern side of the road. There is a very small unofficial layby at the bend in the road opposite the east end of the church, and a wide verge near the church's west end. As far as we can determine, the churchyard is open daylight hours. You can't enter the building for safety reasons, but it is well worth a few minutes exploring the churchyard and examining the architectural details.

Nearby accommodation is calculated 'as the crow flies' from St Colmac's Church. 'Nearest' may involve a long drive up and down glens or, if you are near the coast, may include a ferry ride! Please check the property map to make sure the location is right for you.