HERITAGE HIGHLIGHTS:   Marks the spot where the 93rd first mustered 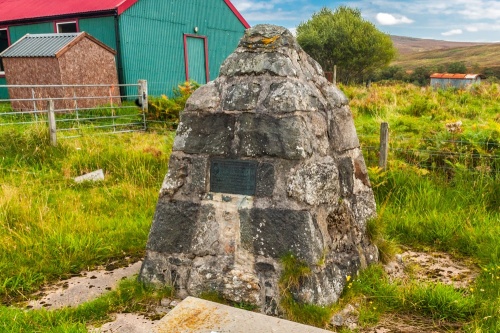 In 1800 Elizabeth, Countess of Sutherland, took a census of the population of her vast estates. As a result of that census, she sent out a proclamation that 'requested that a certain proportion of the able bodied sons of her tenants should join the ranks'. This call to arms was the first gathering of what would become the 93rd Sutherland Highlanders.

Within a few weeks of the proclamation, 600 men were raised. Many of the men were mustered at Skail, in Strathnaver, to enlist. Today, a memorial cairn stands beside the road at Syre, on the site where the men enlisted.

The regiment was raised on behalf of the Countess by Major-General William Wemyss and was originally known as the 93rd (Highland) Regiment of Foot. 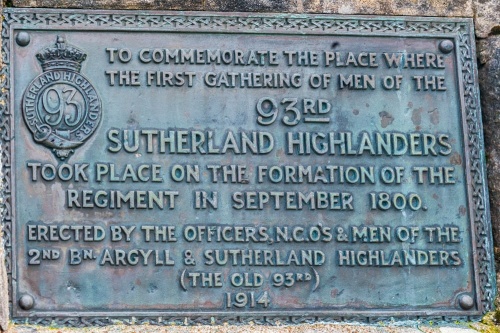 After the 93rd regiment was formed, the men were sent to serve in the Napoleonic Wars and in the War of 1812.

The 93rd Sutherland Highlanders gained a reputation in the military for frugality and piety. The frugality made sense; they came from poor backgrounds, and the soldiers sent most of their wages and prize money to their families back home, who were in desperate need of the money. They also earned a well-deserved reputation for bravery and courage in battle.

The 93rd later served in Crimea, the West Indies, Canada, and India. Seven members of the regiment were awarded the Victoria Cross for their conduct in the famous siege of Lucknow during the Indian Mutiny. In the 1870s the regiment was merged with the 92nd (Gordon Highlanders) Regiment of Foot, then in 1881 it was amalgamated with the 91st (Argyllshire Highlanders) Regiment of Foot to form the Argy and Sutherland Highlanders. 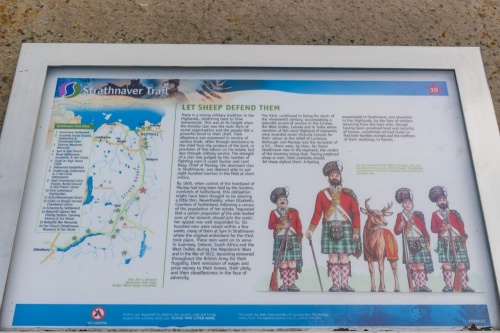 The 93rd was known as the most religious regiment in the Army, and the 93rd formed its own parish, with ministers and parish elders chosen by the men from within their own ranks. It was the only regiment with its own communion plate.

By the time of the Indian conflict there were far fewer Strathnaver men enlisted. The actions of their overlords in Sutherland was behind this reluctance to enlist, for the region suffered dramatically in the Highland Clearances. Soldiers who had been promised land and security sometimes arrived home to find their families evicted and their houses in flames.

The memorial cairn has a plaque that reads:

To commemorate the place where
The first gathering of men of the
93rd
Sutherland Highlanders
Took place on the formation of the
Regiment in September 1800.

A memorial to the 93rd Sutherland Highlanders and the role the regiment played in the Indian Mutiny stands in St Giles Cathedral in Edinburgh. 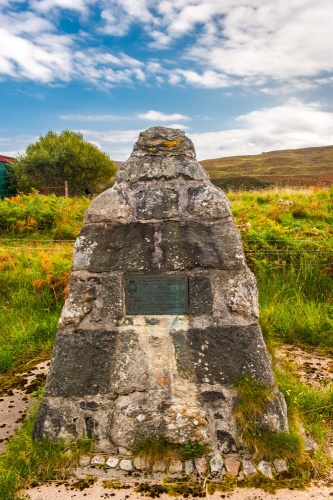 Another look at the memorial

The memorial cairn stands beside the road at Skail (grid reference NC 7198 4821), about 3/4 mile north of the Red Priest's Stone early Christian site. It is immediately beside the disused village hall. There is no dedicated parking, but we found it very easy to pull over onto the verge for a look.

The 93rd Sutherland Highlanders Memorial forms part of the Strathnaver Trail, linking historical sites along the glen. More details of the trail, including a map, can be found at the Strathnaver Museum in Bettyhill.

Nearby accommodation is calculated 'as the crow flies' from 93rd Sutherland Highlanders Memorial. 'Nearest' may involve a long drive up and down glens or, if you are near the coast, may include a ferry ride! Please check the property map to make sure the location is right for you.

The Rhiconich Hotel - 29 miles
Lairg, Highlands and Islands
Stay from: £48.00