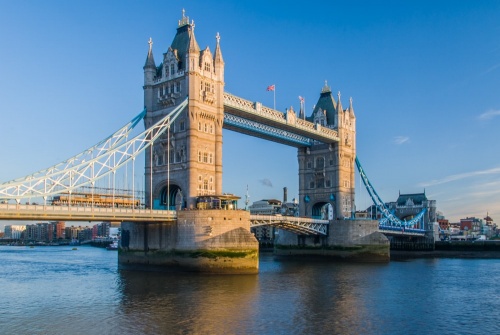 Tower Bridge was built in 1884 and is now internationally recognized as an iconic symbol of London. The Tower Bridge Exhibition allows visitors to ascend the towers to a walkway for superb views of the city, view exhibits on the construction and history of the bridge, and see the original steam engines that used to raise and lower the central section of the bridge.

When the Roman city of Londinium was founded on the banks of the River Thames there was only one river crossing, linking the Roman city to the south bank of the river. For centuries London Bridge remained the only way across the river unless you hired a boat. As the city grew and expanded, more bridges were built, but these were erected west of London Bridge, while the area east of the bridge became a busy port, with docks lining the riverside.

The East End of London grew in population, in part because of the busy port area, and the need for another bridge to serve eastern London became urgent. In 1876 the City of London Corporation launched a competition for a new bridge design; one that would cause minimal disruption to existing river traffic. More than 50 design ideas were submitted, but the winning entry was not chosen until 1884. 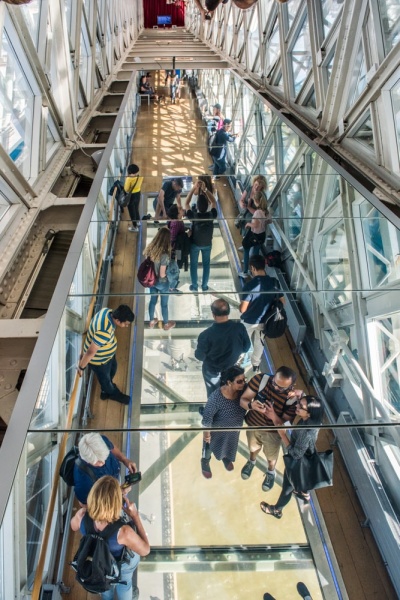 Looking down through the overhead walkway

The design was a cooperative project between John Wolfe Barry and the City of London Architect, Horace Jones. The shape of the bridge, now familiar the world over, was composed of twin towers, with a central section that could be raised to allow tall ships to sail through the central section of the waterway. This type of bridge is what is called a 'bascule' design, from the French word for a seesaw. The 'bascules' are powered by massive pumping engines, building steam pressure to power an hydraulic lift system. 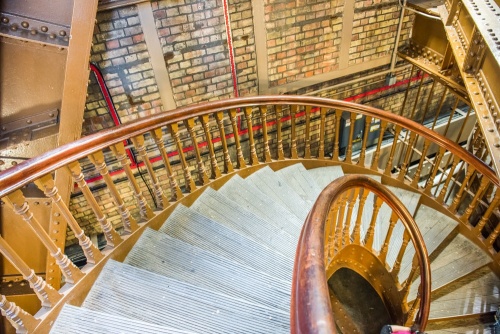 Inside the south tower

The energy created by the steam engines was stored in 6 large containers called accumulators, ready to be used at a moment's notice to raise and lower the bridge. Because the energy was 'stored', there was minimal delay in raising the bridge; it could be manipulated up or down at a moment's notice. From start to finish the bascules can raise the bridge from 0 degrees angle to a maximum of 86 degrees in about 1 minute.

The original steam engines have been replaced by oil and electric engines, but the hydraulic-driven bascule system is still original. The original engines and accumulators are still in place, in the Victorian Engine Room area of the Tower Bridge Exhibition.

To create the bridge, two huge piers were sunk into the mud of the riverbed to support the new bridge. Bridge construction took 8 years, and the hard work of 432 construction labourers to complete and used 11,000 tons of steel for the framework of the towers and walkways.

The steel framework was encased in a mix of Portland stone and Cornish granite. The stone finish served a dual purpose of protecting the underlying steel frame and giving the bridge a more pleasing visual impact. There was a high-level walkway for pedestrian traffic. 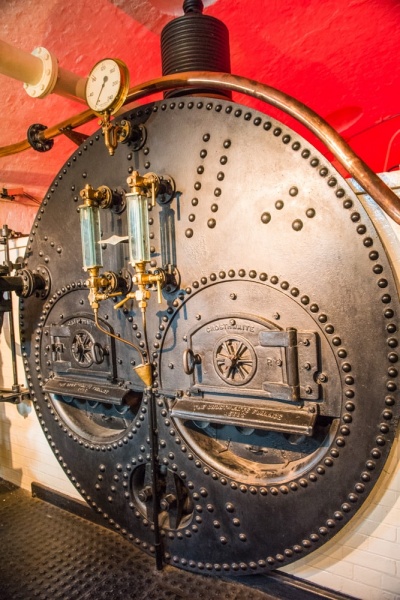 One of the Victorian boilers

The high-level walkway was closed in 1910 because it was simply not being used; pedestrians preferred to walk at street level. The walkways were opened to visitors in 1982 when the Exhibition opened, so modern visitors can now ascend to the original walkways, now covered from the elements, for superb views across the river.

The most dramatic moment in the Bridge's history took place in 1952 when the bridge began to rise while a London bus was driving across it. The bus driver, Albert Gunton, had to accelerate violently so the bus could 'leap' the widening gap between one bascule and the other.

Visitors can walk across the bridge at any time - except when it is being raised to allow ships to sail through the gap. If you want a closer look, the Tower Bridge Exhibition has displays on the history of the bridge, how it was built, an account of royal visits, and old photographs showing the bridge throughout history. 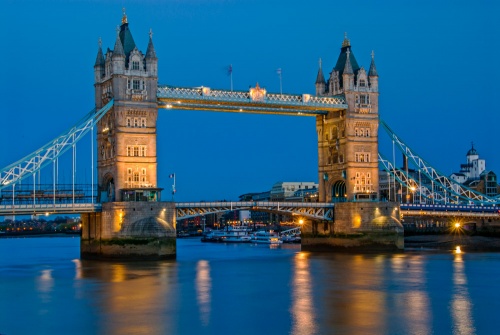 You can descend to see the Victorian Engine Room, with the original steam engines still in working order, and climb to the covered walkway high above the road surface for panoramic views across London.

Most visitors, however, come to take advantage of the newest addition to the Tower Bridge Experience; the chance to look through a clear plexiglass floor of the walkway for views of the bridge surface beneath and the possibility of watching boats travel under the drawbridge.

Though it certainly is interesting, the sheer number of visitors walking over the plexiglass floor panels have left them rather less than crystal clear. You can see perfectly well, but taking decent photos through the plexiglass is rather difficult.

By contrast to the very popular walkway part of the experience, the Victorian Engine Rooms are relatively quiet and don't get nearly so many visitors, though I, for one, found them perhaps more interesting than the walkway views. You can see the huge boilers that fed power to the neighbouring engines used to raise and lower the drawbridges. Even more impressive are a pair of accumulators, huge iron-clad cylinders for building pressure, weighing over 100 tons each.

Be warned that the Tower Bridge Experience is extremely popular and there can be long lineups, especially during the busy summer months. The main entrance is near the north side of the bridge, best-reached from Tower Hill tube station or Tower Gateway DLR. The Victorian Engine rooms are at the southern end of the bridge. 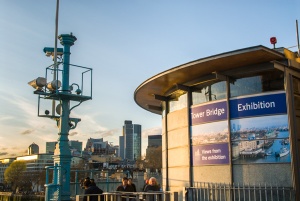 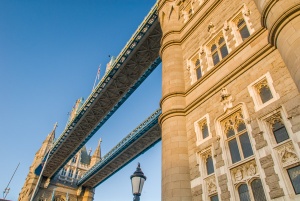 The walkways from beneath 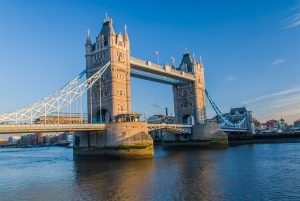 Tower Bridge from the Tower of London 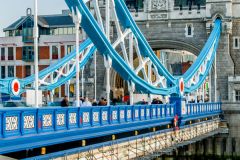 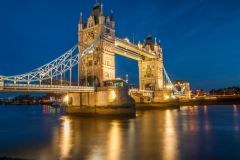 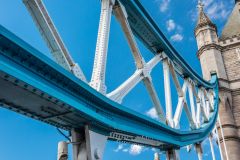 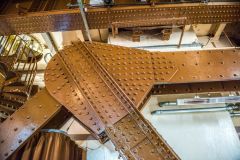 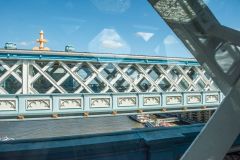 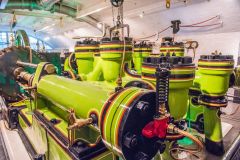 More self catering near Tower Bridge >>