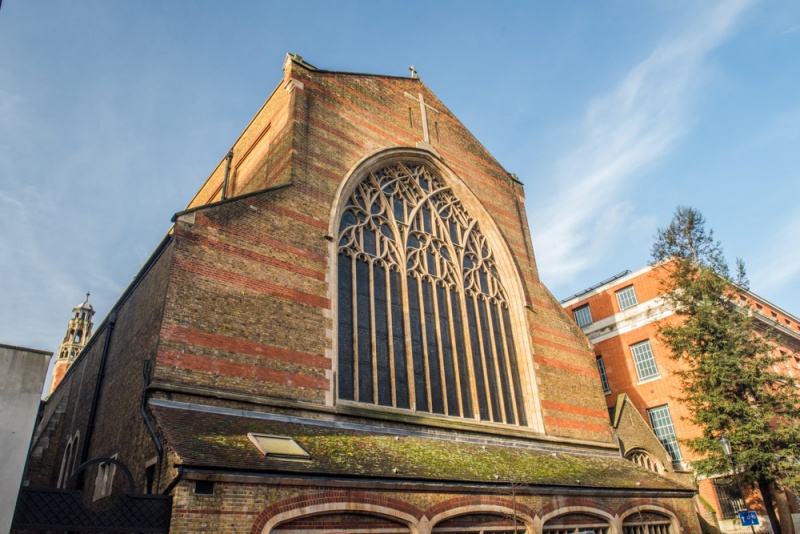 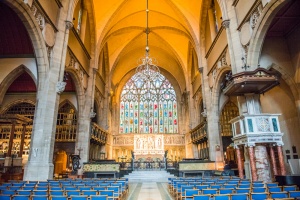 The official dedication of this intriguing building is The Church of the Holy and Undivided Trinity with Saint Jude. Not surprisingly it is usually called simply 'Holy Trinity, Sloane Street'. The church was built in 1888 under the patronage of the 5th Earl Cadogan, whose large London estates covered the Sloane Street area. The Earl called in architect John Dando Sedding to create a striking building in Arts and Crafts style.

Holy Trinity was built on the foundations of an early Gothic Revival church designed in 1828 by James Savage. That first church was intended as a chapel of ease for St Luke's parish church, but it was soon given its own parish of Upper Chelsea.

While the new Holy Trinity was being built a temporary church of iron was erected at nearby Symons Street. Sedding's new church was the widest in London, exceeding even the width of St Paul's Cathedral by a matter of 9 inches! Some of the leading craftsmen of the day were called on to create a luxurious interior, with sculptors such as Hammo Thorneycroft and Edward Onslow Ford contributing work.

Sedding was very much a believer in the burgeoning Arts and Crafts philosophy. He declared that the church should be 'wrought and painted over with everything that has life and beauty'. The exterior is built of striking bands of red brick and white stone, in both horizontal and vertical lines.

Sedding died in 1891, before the church could be completed, and his memorial stands in the Lady Chapel. The church suffered after Sedding's death, for some parts of his original plans were never finished.

The most interesting historic feature is a collection of stained glass windows by Arts and Crafts pioneers William Morris and his friend Edward Burne-Jones. The colourful east window is by the pair, though a planned west window was never finished. Other beautiful stained glass windows were contributed by Christopher Whall, and the firm of James Powell and Sons (the Whitefriars Glass Company). 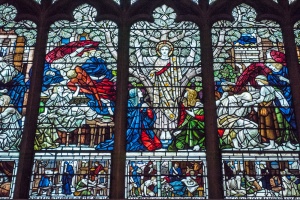 Holy Trinity gained a reputation as a centre for artists and the art world, and is often referred to as 'The Cathedral of Arts and Crafts'. Oscar Wilde was a central figure of a group of artists who gathered here. By contrast, a regular attendee was Prime Minister William Gladstone. Two more disparate figures it would be hard to imagine.

The church was damaged by bombs in WWII, but restored by the 1960s. Church authorities then tried to close the building, thinking it was too large and uneconomical for a diminishing congregation. These efforts were thwarted after a campaign by John Betjeman and the Victorian Society. The church survived and has gained a reputation as a centre for performing arts and a sponsor for artists and architects, in keeping with its origins.

The church is usually open daily to visitors. At least, that's the theory; the first time we visited there was a large welcome sign outside the door, stating that the church was open all day, every day to visitors, but the door was locked. Presumably, the person responsible for opening up was delayed that day! The second day we tried, the door was open as advertised.

And thank goodness it was, for it gave us a chance to explore this magnificent building. The quality of furnishing is simply stunning. Though the stained glass windows understandably get a lot of attention, the highlight to my eyes was the ornate pulpit, made with different coloured marble. What an amazing piece of sculpture! Equally impressive was the richly decorated organ, with gilded panels screening it from the sanctuary and north aisle.

At the west end of the aisle is the large font, set atop a slender pillar, and nearby is a beautifully carved plaque depicting the Madonna and Child. Holy Trinity deserves its reputation as the Cathedral of Arts and Crafts; it is a wonderful historic building and a treat for the senses.

The church is very easy to find; it is on the north end of Sloane Square, opposite the Sloane Square tube station. It is usually open daily to visitors, and there are frequent musical performances at other times. On our last visit the organist was practising for a recital and the magical sound of the organ filled the entire church. 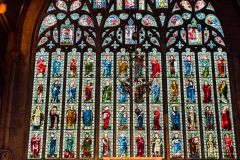 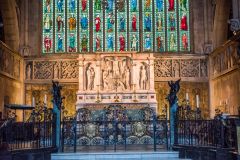 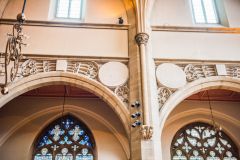 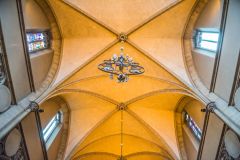