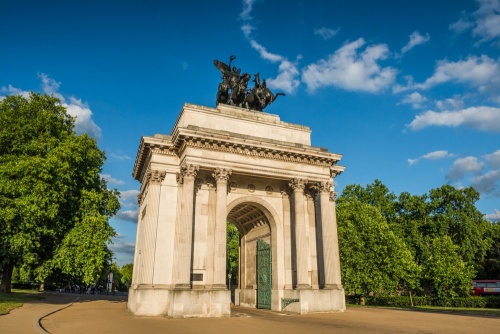 The Wellington Arch is a magnificent processional arch designed by architect Decimus Burton for George IV to act as an outer gateway to Buckingham Palace. In 1846 a huge equine statue of the Duke of Wellington was added to the top of the arch, giving it its current name.

The sheer size of the Wellington statue aroused great public debate, and the finished product was ridiculed and called 'the greatest sculptural fiasco of the 19th century'. On seeing the sculpture a French visitor is said to have remarked, 'We have had our revenge'.

The arch was moved to its present location opposite the entrance to Hyde Park in 1882, where the northern pier of the archway served as the smallest police station in London until the 1950s.

The exterior of the arch is Portland stone, but the cream-coloured stone hides ordinary red-brick underpinnings. There is a single archway, flanked by pairs of Corinthian columns. The columns appear to support a projecting entablature (bands of horizontal moulding), but actually, they are carried on hidden cast iron beams.

The exterior is fairly plain, though Decimus Burton's original drawings suggest that he wanted it to have much more elaborate decoration. Just as impressive as the archway are the cast-iron gates, also designed by Burton, with ornate royal arms on circular panels in the centre of each gate. 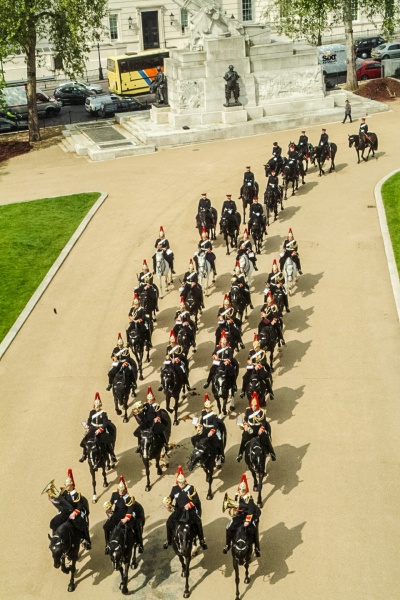 Life Guards passing under under the arch

The statue of Wellington was taken down when the arch was moved, and the arch had nothing on its top for several decades. In 1911, after much public debate, a large sculpture of a four-horse chariot by Adrian Jones was erected on the arch's top.

The statue is titled 'Peace descending on the Quadriga of War' (or simply 'Quadriga' for short) and shows a huge female figure alighting on a chariot with four horses, driven by a small boy who is oblivious to her presence. She holds aloft a laurel wreath and the horses rear in the air. Apparently, Jones completely made up the theme, and neither the figures nor the theme appears in any ancient classical myth.

There are 5 floors of rooms inside the arch. These are very small in the piers, but the third level, above the arch, is spacious and contains an exhibition on the history of the arch and London's famous Blue Plaques scheme. The interiors still have original fittings, including windows, doors, and fireplaces.

The arch is one of two triumphal arches built in London following Wellington's triumph over Napoleon in 1815 (the other is Marble Arch). Both arches were intended to provide imposing new entrances to Buckingham Palace.

Visitors can climb to a viewing platform atop the arch - good for watching the Life Guards as they pass in procession through the arch each day on their way to the Changing of the Guards at Buckingham Palace. I've been on top of the arch during the parade and it is a thrilling experience to see the troops pass under you and out the far side of the arch. If you can manage to time your visit to coincide with the Life Guard's procession, I can highly recommend it!

There is a shop on the ground floor, and a spiral stair climbs to the first floor, where you will find a small exhibition area recounting the story of the Arch, the arguments over Burton's design, old cartoons lampooning the equestrian statue of Wellington, and bronze casts of parts of the current Quadriga sculpture.

You then climb the stairs again to a larger exhibition area. When we visited this area was given over to a fascinating exhibit on the Battle of Waterloo, with star exhibits being the sword that Wellington used at Waterloo, the boots he wore, and hand-written messages he sent during the battle. 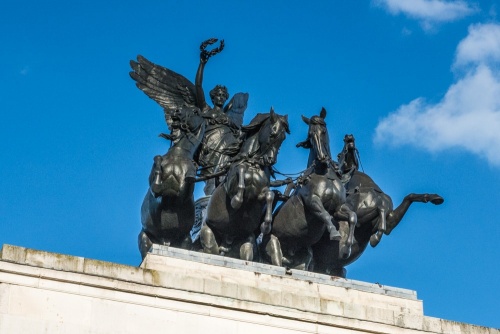 I must also give special mention to the English Heritage guide for this exhibition; never have I met such a knowledgeable guide at any historic building in England. He seemed to have an encyclopedic knowledge of Waterloo, the Duke of Wellington, historic battle strategy, and the daily life of soldiers under Wellington's command. He really made the story of Waterloo and the 'Iron Duke' come alive, and made our visit truly one to remember.

From the exhibition area, you can walk out onto a viewing platform directly beneath the Quadriga sculpture. It is a bit difficult to see much of the sculpture from below, but you do get a sense of its massive scale, and of course, the views down Constitution Hill and north to Hyde Park are excellent.

Directly north of the arch is Apsley House, known as 'No. 1 London', where the Duke lived after his return from Waterloo. Here he entertained nobility and heads of state in grand style and hosted an annual Waterloo Banquet for his old comrades-in-arms. Both attractions are in the care of English Heritage, so you can get a combined ticket for both Apsley House and the Wellington Arch, and you really should see both together. 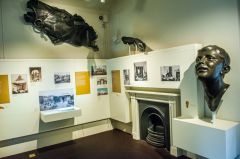 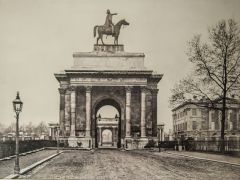 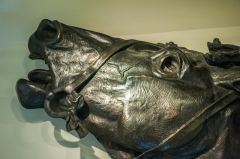 Note: You can get Free Entry to Wellington Arch with the London Pass

More self catering near Wellington Arch >>