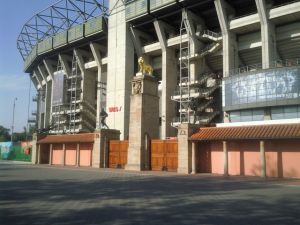 World Rugby Museum
If you are a rugby fan you don't need to be told what Twickenham is; the historic stadium on the outskirts of London has been the spiritual home of English rugby since 1909. The World Rugby Museum is housed in Twickenham stadium and features the most extensive display of Rugby memorabilia in the world. This truly is a world museum, with exhibits tracing the history of this globally popular sport around the world.

One thing you will learn by visiting the World Rugby Museum is that the traditional story of how the game was founded is a complete myth! The traditional story is that a student named William Webb-Ellis was responsible for the birth of the Rugby football game when he decided to pick up the ball 'with a fine disregard for the rules of football as played in his time' and run with it during a match.

The only problem with this version is that it never happened - visit the museum and learn the real story!

The museum displays memorabilia from around the world and from all eras, making it a must-visit for all rugby fans. Among the 10,000+ items in the museum collection are match programmes, letters, tickets, photographs, videos, equipment, jerseys, caps, stamp sets, musical instruments, rugby postcards, and rugby miscellany from all over the world.

Visit the museum separately or as part of a stadium tour. Explore Twickenham Stadium with a rugby expert on a behind-the-scenes tour and journey through rugby history. Guided stadium tours include the England dressing room, the royal box, and VIP areas. Get a bird's eye view from the top of a stand and follow in the footsteps of rugby's best as you run out of the players’ tunnel to pitchside.

The original Calcutta Cup, the trophy traditionally awarded to the victor of matches between England and Scotland is also on display.

In the museum you can explore a glittering array of trophies; take up the challenge of discovering 'What Kind of Rugby Player Are You?'; re-live some of rugby’s most memorable moments; see the oldest international rugby jersey and 'Choose your own World XV'. The museum also maintains a very extensive set of historical archives which can be viewed by arrangement.

It is recommended to pre-book a tour date and time. For museum only visits tickets can be purchased from the England Rugby Store in the South Stand.