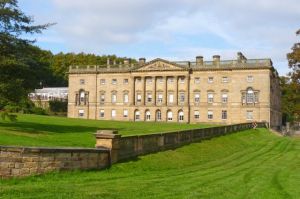 Wentworth Castle Gardens
50 acres of Grade-I listed gardens surrounding historic Wentworth Castle have recently restored to their full glory. The gardens are largely 18th century, created by the Earls of Strafford, and form one of the most important historic gardens in the country.

The gardens feature 26 listed buildings and monuments, including a dramatic castle folly offering superb views across the surrounding countryside. Wentworth was featured on the television series 'Restoration'.

The gardens are listed as Grade I for their heritage value; the only Grade I listed gardens in South Yorkshire. There are 60 acres of formal gardens, reflecting centuries of changing fashion in garden design. Among the historic formal gardens are the 18th century Union Jack Garden, and a Victorian 'secret garden'.

In 1695 the 2nd Earl of Stafford died without a son to inherit his Yorkshire estates. Thomas Wentworth might have expected to inherit, but instead, the estate went to a cousin, Thomas Watson. Wentworth was determined to establish his claim to the earldom, and in 1708 he bought Stainborough Hall, just 7 miles from the Earl's old seat at Wentworth Woodhouse.

Queen Anne created Thomas the 1st Earl of Stafford of the second creation. Wentworth served overseas as an ambassador to the Prussian court, and there he became familiar with the ornate Baroque style of architecture. From 1709 he built a new Baroque style wing to Stainborough Hall.

In 1727 Wentworth built a new castellated folly on a high hill. When this was finished in 1731 he called it Stainborough Castle and renamed the estate and the old house as Wentworth Castle.

Thomas Wentworth's son William created a new wing to the house in fashionable Palladian style and created a new landscape garden in the style made popular by Capability Brown. The gardens were developed by successive generations of Wentworths, adding exotic shrubs and trees.