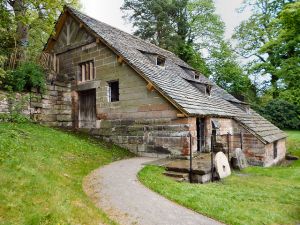 Nether Alderley Mill
A 16th-century corn mill in the centre of Nether Alderley village, on the A34. The mill is build of imposing red sandstone walls with a sloping roof topped by Cheshire flag tiles. The weight of the roof has been estimated at 200 tons, and the timbers that support it are necessarily huge.

Though the mill dates to the 16th century, there has been a mill on the site since at least the 14th century.

Interestingly, the back wall of the mill acts as a dam for a small lake which powers a pair of overshot waterwheels. The water from the tailrace of the upper waterwheel powers the lower waterwheel and each waterwheel acts on a different set of machinery, meaning that there are, in effect, two separate mills functioning in the same building.

The mill ceased operation in 1939. It was restored in 1967, and all the machinery is now operational once more. It is one of only four complete corn mills remaining in Cheshire.