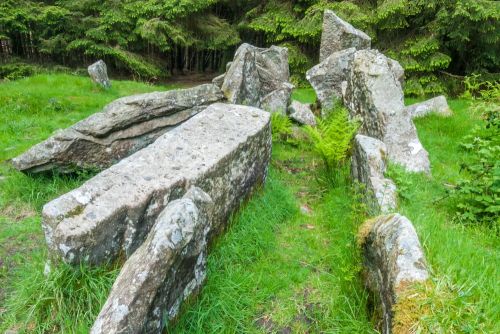 In a small clearing on a hillside above Whiting Bay stand a pair of Neolithic chambered long cairns known as the Giants' Graves (sometimes wrongly spelled as Giant's Graves). The cairns are of the Clyde type, and are in a poor state of repair, with turf bracken covering part of the remains.

The two long cairns are known to archaeologists are Giants' Graves North and Giants' Graves South. They were built sometime between 4500-5500 BCE, in a style similar to other burials in that period found around the Firth of Clyde.

The cairn is up to 5 feet high on the west side but falling to between 2-3 feet on the remainder of the cairn. The forecourt area is roughly 41 feet across and 20 feet deep. The forecourt area is defined by a pair of large standing stones at each horn. The northeast stone still stands, but the northwest one has fallen.

The burial chamber itself is 22 feet long and from 2'7" to 5' wide. When the chamber was excavated in 1902 it was found to have already been opened. A layer of charcoal dust lay on the chamber floor. 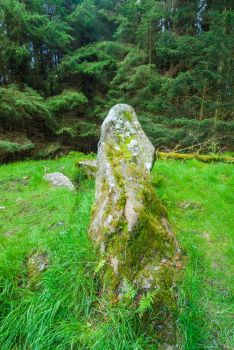 The burial chamber from the north

The partial remains of a second chamber were found 33 feet south of the main chamber. This south chamber is much smaller, at 7'6" long.

Giants' Graves South lies 60 feet to the south at NS0431024636 and is at right angles to the northern cairn, on a WNW-ESE axis. It is 36 feet at the west end and tapers for 42 feet to a rounded east end. It is roughly 3-4 feet high along its entire length. A single upright stone stands at the edge of the cairn, seemingly to revet (reinforce) the kerb.

The burial chamber is at the west end of the cairn. The chamber is 14 feet long and 4'7" wide. When it was excavated in 1902, nothing was found, but a later investigation unearthed pottery sherds and fragments of cremated bone. 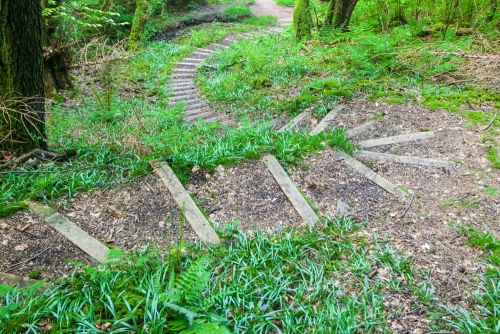 Woodland trail to the cairns

Start at the Ashdale Bridge parking area (A841) on the southern end of Whiting Bay. Take the footpath signed to Glenashdale Falls, and you will see a path forking off to the left after 500 metres. Just follow the fairly steep path until you reach the cairns.

Alternatively, carry on until you reach the Falls, which are well worth seeing, and take the signposted trail from the viewing platform that leads back at an angle across the hillside to the Giants' Graves. Then simply follow the steep footpath to make a circular route. I recommend this second option, as the going is easier and it really is worth seeing the waterfalls.

If you opt for the first path, just be aware that it is a bit of a stiff climb up to the cairns. There are well over 250 steps cut into the hillside, and the going will make you huff and puff a bit. However, the woodland is wonderful, and the cairns seem to be a million miles from anywhere.

Since we first visited the Giants' Graves, the hillside has been cleared of trees, so that now you can get wonderful views down on Whiting Bay. Rather than being hemmed in by woodland, the cairns are now completely exposed. 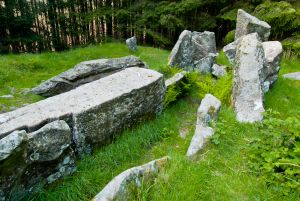 Nearby accommodation is calculated 'as the crow flies' from Giants' Graves. 'Nearest' may involve a long drive up and down glens or, if you are near the coast, may include a ferry ride! Please check the property map to make sure the location is right for you.

More self catering near Giants' Graves >>