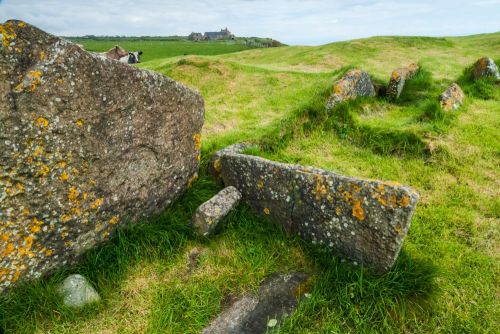 Torrylin Cairn is a Neolithic chambered cairn in a fabulous location looking south to the enigmatic peak of Ailsa Craig. There are four chambers at Torrylin, one of over 25 similar cairns on Arran. The cairn appears to align with Ailsa Craig. Coincidence?

The cairn originally had a forecourt area defined by tall stones, leading to an inner rectangular chamber divided into four similar compartments. Excavations revealed the remains of 6 adults, a child, and an infant burial. Fragments of flint tools, animal bones,  and bits of pottery were also discovered within the chambers.

It seems likely that the cairn was used over a long period of time, with the bones sorted and distributed amongst the four chambers. The presence of animal bones suggests that ritual feasting took place here, and that the chamber may later have been used as an animal den. 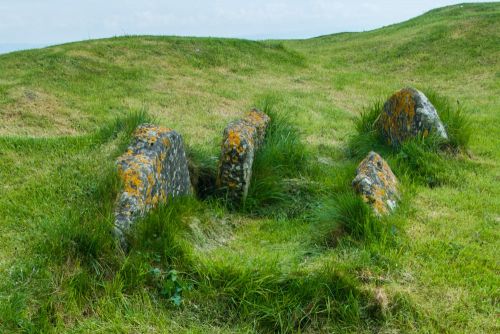 Over 20 chambered cairns are known on Arran. They were traditionally regarded with fear by the locals, and the official Historic Environment Scotland listing for Torrylinn says that this dread was reinforced when the farmer who excavated the cairn met an untimely and [unspecified] grisly end.

This style of cairn can be found throughout southwestern Scotland and is typically known as a Clyde cairn. Clyde cairns consist of a crescent-shaped forecourt area created by a curved row of standing stones. Behind the forecourt is the burial chamber divided into separate compartments by upright stone slabs.

Unfortunately, Torrylinn has been greatly disturbed by farming over the centuries. The stones were robbed for construction purposes and the site has been ploughed more than once. You can still, however, see how the burial chamber was constructed. The remains are rather scanty, but it is a lovely walk to the cairn and the location is fabulous.

The path to the cairn is signposted from the Kilmory post office near the bridge at Lagg. A trail leads 800 metres along a field boundary, beside Torrylin Water, through woodland, and emerges on the cliffs overlooking the shore. On the opposite bank of the burn at least two other cairns are visible. 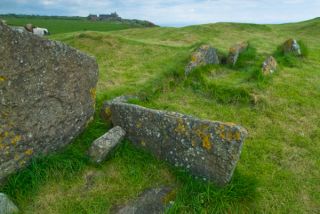 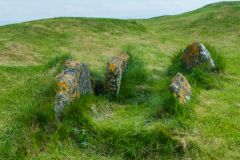 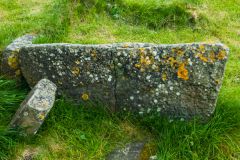 Nearby accommodation is calculated 'as the crow flies' from Torrylin Cairn. 'Nearest' may involve a long drive up and down glens or, if you are near the coast, may include a ferry ride! Please check the property map to make sure the location is right for you.

More self catering near Torrylin Cairn >>