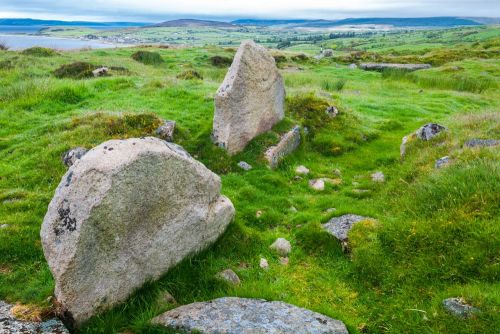 Kilpatrick is an intriguing archaeological site, a complex of ancient structures variously described as a dun, or fort, and a cashel associated with a monastery founded by St Brandon (a cashel is a circular enclosure bounded by a drystone wall, though the term is often used to describe an early Celtic religious site).

The association with St Brandon is probably dubious, but this has not stopped Kilpatrick from being a destination for modern pilgrimages.

At Kilpatrick there are two obvious enclosures; a large 'cashel', which is more likely to be a Celtic homestead. Within the cashel wall is a smaller enclosure measuring about 50 feet in diameter. This 'dun' is set within a thick stone wall stretching from 3.7m to 4.6m thick. Inside the dun wall is at least one chamber. 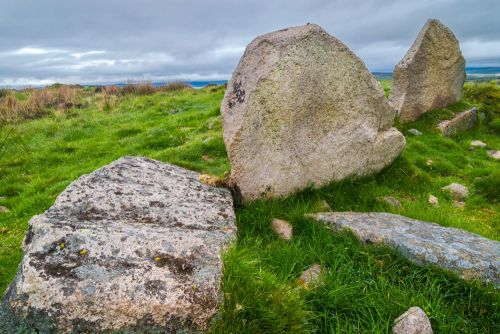 Given the variety of walls on the site, it seems clear that Kilpatrick was occupied for a long time, from at least the Romano-British period well into the late medieval era. Outside the large enclosing wall are five smaller hut circles, two to the west and three to the east, plus several boulders that seem to make an alignment pattern. Archaeological investigation suggests an ancient field pattern, but evidence for this is almost non-existent on the ground.

Beyond the eastern hut circles is another Bronze Age cairn, and yet another kerb cairn lies two miles north at Auchengallon. 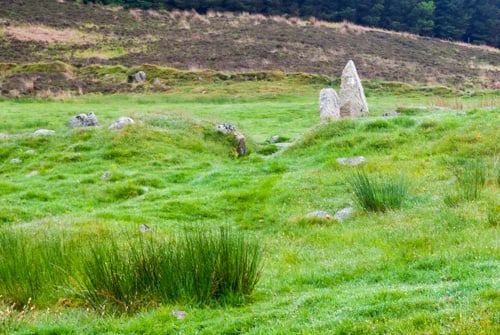 Excavations at Kilpatrick Dun unearthed a Bronze Age cist (a stone-lined burial enclosure) under the dun floor. This suggests that the site was first used as a Bronze Age burial cairn before the dun was built. That raises an intriguing question -- was the dun built on top of the burial cairn because the site already had local significance?

There is a small signposted path and parking area just off the A841. A half-mile-long trail leads to the dun. Good footwear is advisable.

I found Kilpatrick Dun one of the most interesting ancient sites on Arran. It is not the most spectacular site, and the remains are a little hard to interpret, but it had an unforgettable atmosphere; an ambience of antiquity if there is such a thing. 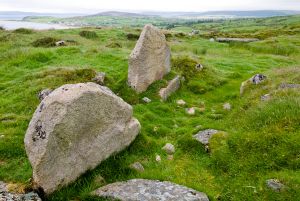 Nearby accommodation is calculated 'as the crow flies' from Kilpatrick Dun. 'Nearest' may involve a long drive up and down glens or, if you are near the coast, may include a ferry ride! Please check the property map to make sure the location is right for you.

More self catering near Kilpatrick Dun >>