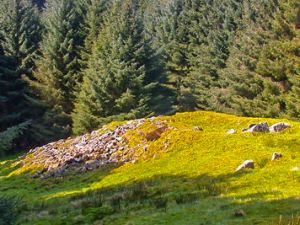 Carn Ban
One of the most famous Neolithic long cairns in the southwest of Scotland, Carn Ban is an elongated burial cairn in a wooded setting, built in a trapezoid shape, with a horned forecourt and a central passage divided into several sections.

You have to be pretty determined to reach Carn Ban; it takes a walk of 4 miles through a forestry plantation, but the reward for your exertion is one of the largest and most important Neolithic cairns in Scotland.

The burial mound is in a style known as a Clyde cairn. It is a rough trapezoid, with a forecourt at the wide end in a semi-circular shape. In the centre of the forecourt, a passage leads into the cairn interior. The inner chamber is divided into four compartments by cross-slabs, a similar arrangement as the one at Torrylin Cairn, about 4 miles away at the mouth of Kilmory Water.

Both horns of the forecourt are squared off and terminate in a pair of upright slabs. The forecourt area is about 34 feet wide and 20 feet deep. It is possible that the forecourt originally extended into a circular formation of standing stones.

The cairn measures roughly 100 feet long by 60 feet wide and is laid out on a sloping hillside on a north west to south east axis. At the small end, the cairn is only about 15 feet wide. The chamber is topped with five heavy stone slabs. At the south west end are several exposed stones suggesting that there may have been a second burial chamber, though this has never been found.

When the cairn was excavated in the late 19th century by antiquarian TH Bryce there were only a few scant finds, including several flaked implements and a piece of unburnt human bone. The acidic soil probably dissolved any other bones that were interred at Carn Ban. Though the site was excavated, it remains relatively undisturbed, perhaps due to difficulty accessing the site.

The cairn can be reached from one of two places; from a signed trail at Lagg, just east of Torrylin cairn, or from Whiting Bay, where a signed trail leads to Glenashdale Falls. If you keep on the forestry plantation trail past the waterfall you will eventually reach the cairn.

A good OS map would be useful, though not completely essential, as the cairn is at the end of the forestry track and should be easy to find. I've walked through this plantation several times, and it's a fantastic place to enjoy nature. Leaving aside the historical interest, it's a great walk. If you come from Whiting Bay you can take a short side-trip to the Giant's Graves burial site as well.

Nearby accommodation is calculated 'as the crow flies' from Carn Ban. 'Nearest' may involve a long drive up and down glens or, if you are near the coast, may include a ferry ride! Please check the property map to make sure the location is right for you.

More self catering near Carn Ban >>