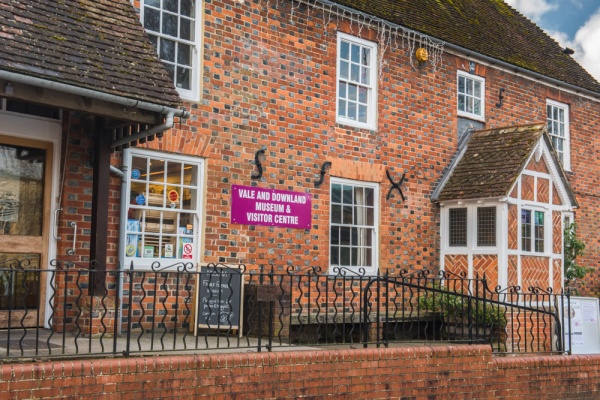 The Vale and Downland Museum

This fascinating local museum tells the story of the Vale of White Horse. The museum is housed in a beautifully restored 17th-century cloth merchant's house opposite the 13th-century parish church of Wantage and just a few steps from the market place.

The merchant's house is an excellent example of vernacular architecture, with a mix of timber-framed walls, brick, and stone. The historic building is linked to a modern extension creating 2 floors of exhibit space and to an 18th-century barn that originally stood in nearby East Hendred. The barn was disassembled, transported to Wantage, and reassembled to be incorporated into the museum. 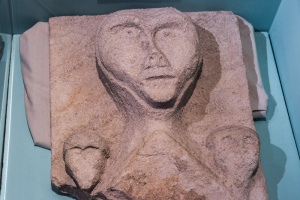 Saxon carving of a human head

In the medieval period the museum site formed part of the manor of Priorshold, held by the priory of Ogbourne in Wiltshire. The land and buildings were leased by the priory to local merchants. After the priory was dissolved by Henry VIII in 1538 the land passed to the Dean and Chapter of Windsor, who continued to lease it to local merchants. The building as we see it today is largely the result of a rebuilding in 1780 by a clothmaker named Lawrence Hazell. From the mid-19th century, the house served as a doctor's surgery.

A visit to the museum begins with two short films, narrated by David Attenborough, about the Vale of White Horse and its rich heritage. There is a fascinating exhibition area with historic objects found locally, ranging from Roman tiles to a 6th century Saxon skeleton from Watchfield. A special display focusses on Alfred the Great, who was born in Wantage.

One fascinating exhibit traces the story of American GIs who served at nearby Grove during World War Two. An interactive feature recreates the story of one GI from his personal (and illegal) diary. 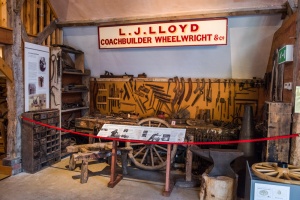 There are several recreated shops, including the local Arbery & Son drapers store, the LJ Lloyd wheelwright workshop, and a railway carriage. One popular display is a 26-foot long 'Railway through the Vale' exhibit, with a working Great Western Railway train passing through a recreated landscape scene depicting the Vale close to Wantage.

A Need for Speed

Another form of transportation - and quite a bit faster - is a Williams Formula 1 race car. The Williams F1 team was based near Wantage and have been one of the most successful F1 manufacturers of recent years. A full F1 car is on show, with a history of the team and various automotive bits and pieces from William's vehicles. 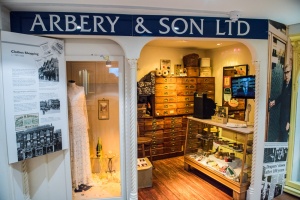 Another exhibit looks at the life of Robert James Loyd-Lindsay, who served in the Crimean War and was one of the first men to be awarded the Victoria Cross. Loyd-Lindsay later helped for the Red Cross and personally delivered the first impartial aid funds to the front-lines during the Franco-Prussian conflict of 1870. He was also known locally for helping fund the statue of Alfred the Great that stands in the Market Square.

Another exhibit looks at the life of William Butler, vicar of Wantage from 1846-1881. A tireless reformer, Butler helped found local charities, established schools, set up sanitation works, gas lamps in public places, and fresh water supplies for the town. He built almshouses for the poor and set up a Church of England Sisterhood to help visit the sick and work for female education.

The museum includes a popular cafe, shop, garden, and terrace. It also maintains a library of over 1500 books and periodicals relating to the Vale of White Horse.

Between us, my family have visited the Vale and Downland Museum three times, and we've always left impressed. This is without question one of the best and most enjoyable local heritage museums in England, and well worth a visit. 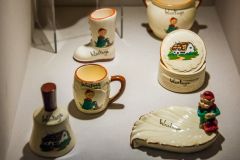 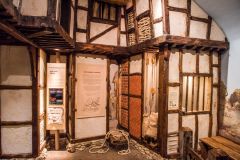 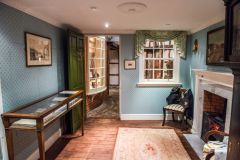 More self catering near Vale and Downland Museum

More bed and breakfasts near Vale and Downland Museum