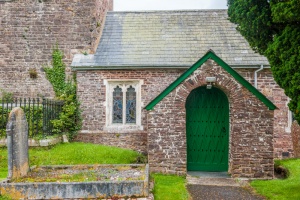 The name 'Puddington' may evoke smiles, but this attractive Devon village derives its name not from a dessert, but (probably) from the name of a Saxon chief. The village was recorded in the Domesday Book of 1086 as Potington, possibly from 'Putta's tun' or the farm of Putta.

The present church is an attractive 15th-century building, set well back from the main east-west road through the village. The church was completely refurbished in the Victorian period, under the direction of Rector David Llewellyn, who served the village for 36 years from 1835. The medieval structure was swept away, save for the west tower and the 15th century south porch.

Money for the entire restoration was given by the church patron, Charles Noel Welman. Llewellyn and Welman removed the box pews in favour of open pews and created an open sanctuary. Three medieval pews were preserved and used as models for the 19th-century pews. In the tower several more original medieval bench ends are preserved. The Victorian benches incorporate late 15th and early 16th century carved bench ends, with linenfold decoration and geometric designs. 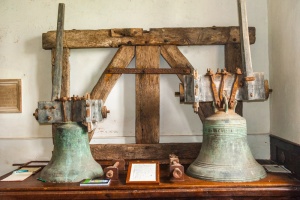 Other medieval survivals include the beautifully carved pulpit, and a Jacobean seat in the choir. The wagon roof, though Victorian, appears to incorporate medieval timbers.

The font is 15th century, made of Beer stone and topped by a slightly later ironwork cover. The chancel floor is made with 18th-century black and white marble tiles.

The oldest part of the church is the tower, built in the late Norman period. The tower arch, now arguably the most impressive feature in the church, was only discovered in 1975, having been blocked by masonry since 1837.

At the west end of the church is a display of two bells and a bell-frame. These were removed from the belfry after the tower structure was declared unsafe (it has since been strengthened). The treble bell is dated 1742 and was cast by Thomas Wroth of Wellington. 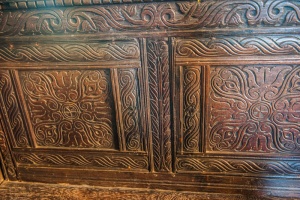 The tenor bell is fascinating; it may date to as early as the 14th century, though the 16th century seems more likely. It is an 'Alphabet Bell'; that is, an inscription has been replaced by letters of the alphabet. In this case Z is missing, and C, D, L, Q, X, and Y are upside down. This type of bell was common in the reigns of Mary I and Elizabeth I, when Latin inscriptions might be considered politically inflammatory, while English inscriptions would be unfamiliar.

Behind the bells are a portion of the original bell-frame, probably dating to the mid-16th century.

There are few noteworthy memorials, but set on a window sill at the west end of the nave is a plaque with moulded plaster figures of a skull and crossed bones. The carving was rescued from the Blagdon family monument in Honiton Church after a fire in 1911. In the north aisle is a charity board commemorating the gift of £10 to the poor, given by Humphrey Brooke of Cruwys Morchard in 1662.

St Thomas' is a lovely country church, notably mostly for its late medieval bench ends and old bells, and set in a very pretty village. 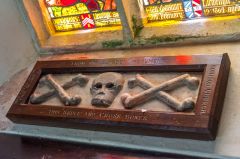