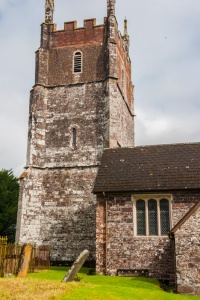 Cruwys Morchard is not really a village, but a scattered parish, set at the point where the plateau of North Devon meets the deep river valleys of Mid-Devon. The parish is one of the largest in the country, taking in the villages of Nomansland, Way, and Pennymoor. If Cruwys Morchard can be said to have a heart, it is the parish church of Holy Cross and the neighbouring manor house.

The peculiar name of the village is a combination of words meaning Great wood Cross, though it isn't clear if the 'cross' in this case refers to a religious symbol or the nearby crossroads. What is clear is that the first church here dates from the time of Godfrey de Sower, who was named the first rector in 1262. That 13th-century church was a crude building of timber, but in 1529 it was rebuilt in stone.

Unfortunately, the recorded age of the church rather puts the lie to a delightful old rhyme which suggests that the local manor houses predate the Norman Conquest,

"Crocker, Cruwys, and Copplestone,
When the Conqueror came, were at home." 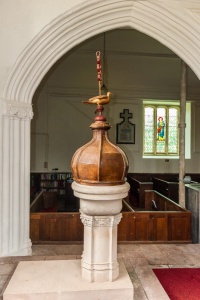 Disaster struck in 1689 when the steeple was struck by lightning. The resulting fire was so devastating that the flames melted the bells in the tower, sending streams of molten metal down the tower walls. The top stage of the tower was rebuilt in brick, giving us the peculiar mix of materials we see today.

The fire also destroyed medieval glass depicting the arms of the local lords of the manor, the Cruwys family. The Cruwys family also had a private chapel with family tombs, but this was destroyed by Cromwell's troops in the Civil War.

If the fire had a plus side it is that the interior of Holy Cross was refurbished in the aftermath of the blaze. As a result, the fittings are a wonderful example of 18th-century style, almost completely untouched since they were installed. There are box pews, carefully labelled with the name of the families that gave money to their restoration, and an elegant late 17th-century font in classical style.

You enter the churchyard through an unusual revolving lych gate, not dissimilar to a modern revolving door. The lych gate was installed after the fire of 1689. In the churchyard are some interesting older gravestones including one to the Maunder family dated 1643. In the south wet corner of the churchyard is a yew tree planted in 1792, and to the left of the porch is the old village stocks. 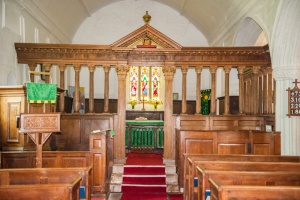 When we came to visit we found the church locked, with no indication of where to find a keyholder. Luckily, I spied a woman doing gardening in the house behind the church. I called over the stone wall to her, and as luck would have it she proved to be the keyholder. She fetched the key for me and told me about the history of the church and what it was like to live in the area.

It's one of the most enjoyable parts of exploring country churches; listening to the stories of people who live nearby, and who so often are full of information about their local church and its history.

Armed with the key, I opened the church, hoping for something wonderful.

I found it. The pride of Holy Cross is the superb screen, carved in beautiful detail with floral emblems and exquisitely detailed Gothic tracery. It is without question the best 18th century screen in Devon, and one of the best in England.

The screen is supported on Corinthian pillars with capitals made of lime wood, topped by a classical pediment. It was probably carved in 1700, and the carving is by far the best of any woodwork in the church. Atop the pediment is a gilded crown set on a carved cushion. Taken as a whole the screen is a simply superb piece of 18th-century woodwork. 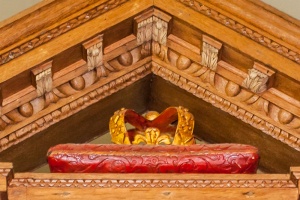 A gilded crown atop the screen

South of the screen is the Cruwys family pew, and behind that are the pews for servants at the manor house. Beneath the screen is a small pew set aside for the clerk and the parson's wife. The box pews in the nave were available for rent at rates varying from a sixpence to a shilling per year. One seat is reserved for girls under 14 and another for young boys. Look carefully on the south side of the chancel and you will find several pull-out, or 'apprentice' seats.

Holy Cross is a delightful church, a mix of medieval and 18th-century architecture, with a deliciously untouched 18th-century interior. It is well worth a visit. 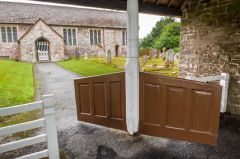 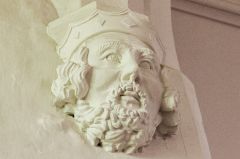 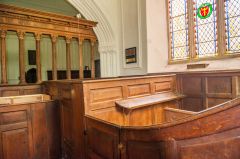 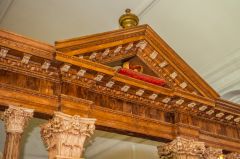