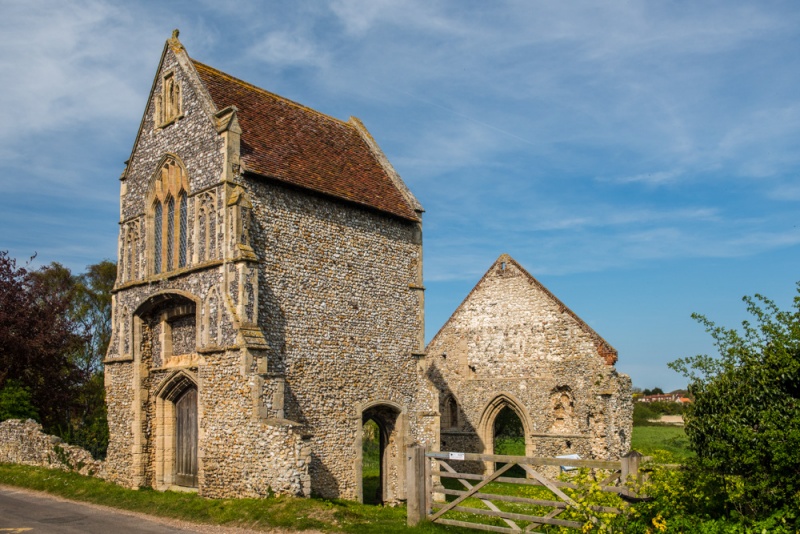 Burnham Norton Friary was the fourth Carmelite house of friars to be established in England and the first to be founded after the order was expelled from Mount Carmel in 1238 by the Saracens. The friary was founded in 1241 by Sir Ralph Hemenhall and Sir William Calthorp. It began at another site which proved unsuitable and was moved to Burnham Norton in 1253.

The initial foundation was small, and though it was enlarged in 1298 and again in 1353 it was a relatively minor house. One notable prior was the theologian Robert Bale, who wrote a history of the Carmelite order. Bale collected an important library of manuscripts which he gave to the friary on his death in 1503. He was buried in the friary church.

Documents from the early 16th century suggest that it only supported 17 friars at that time. At the time of the Dissolution of the Monasteries only 4 friars resided at Burnham Norton. Jane Calthorp of Polsted Hall, a descendant of one of the co-founders of the friary, wanted to purchase the property, and apparently the friars were only too happy to sell to her, as the monastery was not rich enough to support them properly. However, Henry VIII granted the friary to Sir Richard Gresham.

The king may have been influenced because two of the friars had joined the Walsingham Conspiracy of 1537; a protest against the closure of monasteries. One friar was imprisoned for life, and another was executed for his role in the protests. 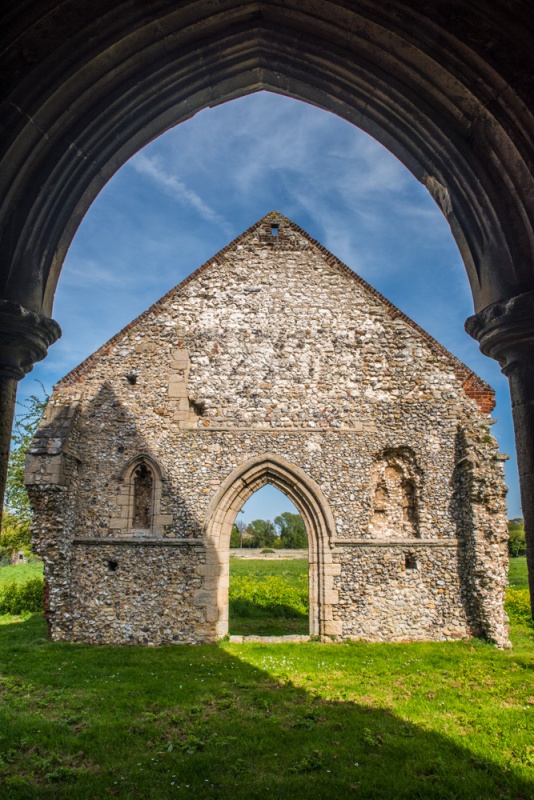 The west wall of the friary church

Most of the monastic buildings were torn down, though it appears that the friary church was in use as a barn in the 18th century.

The best surviving feature is the friary gatehouse, a beautiful piece of medieval architecture, built around 1320. The gatehouse is decorated with traditional flint flushwork so often seen in East Anglia, but this example is one of the earliest in the area. The large window over the gatehouse passage has been restored, with modern tracery. Under the window is a beautifully carved recess with niches for three statues. A modern external stair rises to the first floor of the gatehouse, replacing a stone medieval stair.

Behind the gatehouse stands a gabled portion of the west wall of the friary church. The wall has a central doorway, and statue niches to either side. Above the doorway is a blocked window. One thing that struck us as curious is how close the church wall is to the gatehouse. Clearly the friars did not have much space within their precinct.

Historic England has suggested that contrary to popular belief this was not the west wall of the church, because it stands so close to the gatehouse. I tend to agree with them, but the Norfolk Archaeological Trust, who look after the site, sticks with the traditional interpretation that it is part of the medieval friary church.

The remainder of the friary church is visible only as turf-covered bumps in the meadow to the east. You can clearly trace a rectangular series of earthworks showing the outline of the church foundations and the surrounding monastic buildings.

The meadow is leased by the Norfolk Archaeological Trust from the Holkham Estate. On the north side of the meadow is Friary Cottage, built with dressed stones from the medieval monastic buildings. Aerial photographs suggest that there may have been further friary buildings where the primary school now stands across the road.

Running along the roadside from the gatehouse are parts of the precinct wall.

There is no dedicated parking area. I managed to pull over into a layby. There is an information panel to explain the history of the friary and the layout of the site. 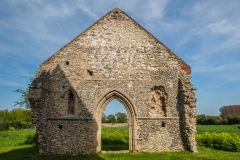 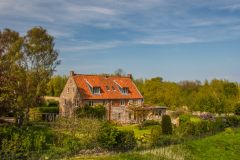