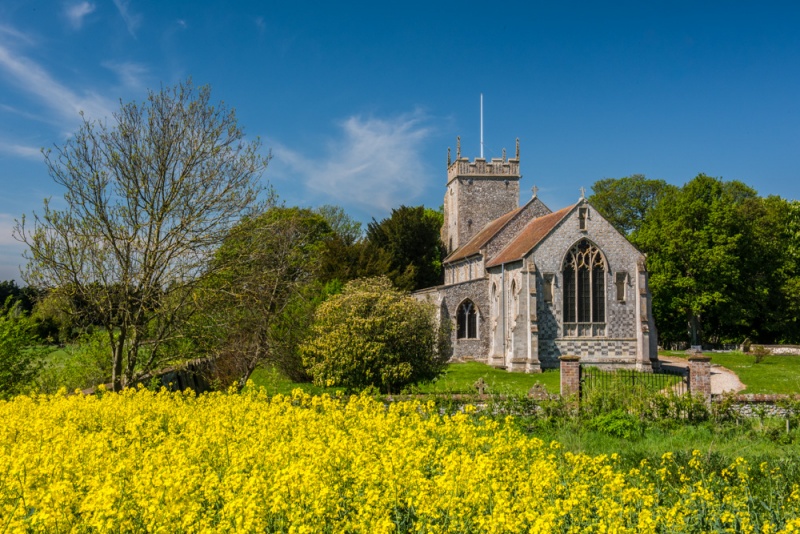 All Saints Church is set back from the long village green in Burnham Thorpe, opposite the Lord Nelson pub. The pub is not only named for local hero Admiral Horatio Nelson, who was born in the village, It was his 'local', and the interior has been preserved as it was when Nelson frequented the inn.

Nelson's father Edmund was the rector of Burnham Thorpe from 1755-1803, and Horatio was baptised in the font of All Saints. The Nelsons lived at the Old Rectory, which unfortunately was torn down in 1803. A plaque on a nearby wall marks the parsonage location.

The church dates to the 13th century. It was rebuilt in the 1840s and completely restored in 1905 to commemorate the centenary of Nelson's victory at the Battle of Trafalgar. The Admiralty donated timbers from Nelson's flagship, the HMS Victory, which were used to build the altar, lectern, and rood screen.

Hanging at the west end of the nave are flags flown by the HMS Nelson, and one used by HMS Indomitable at the Battle of Jutland. The church also has the unique right to fly the white ensign flag from its tower. The white ensign was used prior to 1801. 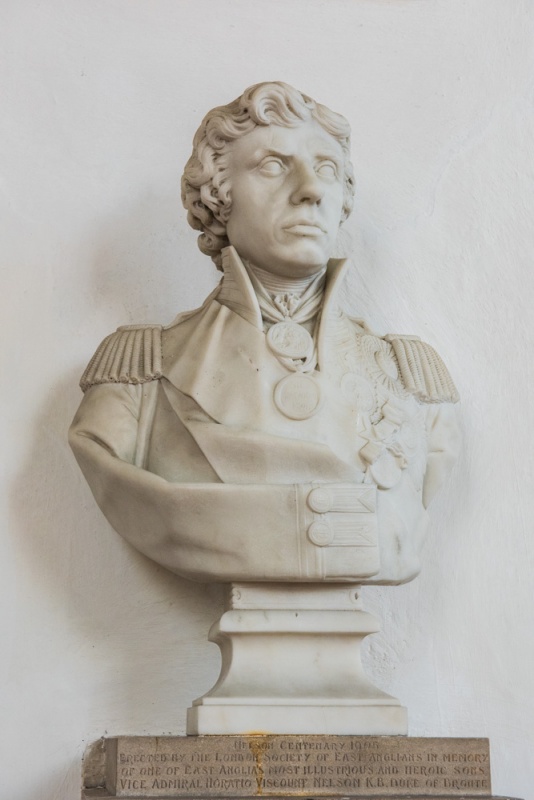 The graves of Nelson's father and mother are on the north side of the chancel, marked by plainly carved grave slabs, while his brother and sister are buried in the churchyard.

On the chancel wall is a neo-classical memorial to Edmund Nelson, erected in 1802 by his children, including Lord Nelson. Near his father's memorial, set on the north chancel wall, is a bust of Admiral Nelson himself, installed in 1905 by the London Society of East Anglians.

On the west wall of the nave is a ship's crest, carried aboard the HMS Nelson throughout WWII. It was presented to the church in 1955 to mark the 150th anniversary of the Battle of Trafalgar. Beside it is a framed copy of the page in the church registry recording Horatio Nelson's baptism on 6 October 1758.

Beneath it are copies from the registry for two marriages, one in 1768 and the other in 1769, with Horatio Nelson's signature as a witness. Nearby, just inside the north door, is a framed copy of a newspaper report on Nelson's state funeral in London, with a drawing of the ornate hearse specially constructed for the occasion.

The high altar is dedicated to those who fell at Trafalgar, and, as mentioned above, made with wood from the HMS Victory. Opposite the Nelson memorials is a beautifully carved 15th-century sedilia, or clergy seat, with ornate ogee canopies in Perpendicular style, decorated with figures of angels.

Set into the floor is a small memorial brass to Philip Cornwall, dated 1680. Against the wall of the north aisle is a worn medieval coffin lid with a floriated cross, resting on original medieval floor tiles. Nearby is a 15th-century sepulchre, or tomb recess. Other good memorials include those of Anne Everard (d. 1841) and William Everard (d. 1847), by JG Lough of London. 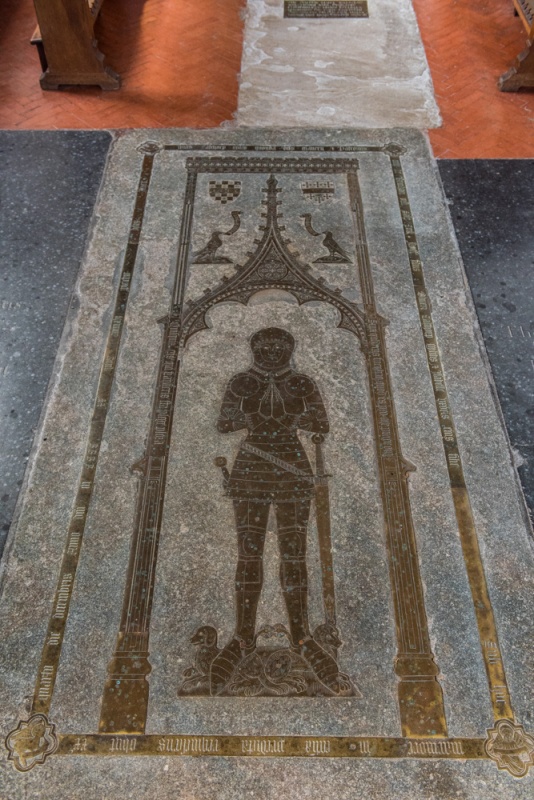 Though the Admiral Nelson connection is what will bring most people to Burnham Thorpe church, there is a historic treasure that deserves equal attention. In the chancel floor is a large memorial brass to Sir William Calthorpe, who died in 1420. The brass is beautifully detailed, and shows Calthorpe in knightly armour, with a pair of dogs at his feet. His collar shows the double S symbol, a reminder of his allegiance to the House of Lancaster in the Wars of the Roses.

The huge memorial stone is over 7 feet high, bordered by a brass fillet with symbols of the Four Evangelists in the corners. At the top, near Calthorpe's head, are two heraldic shields bearing the arms of St Omer and Calthorpe. With the shields are angels bearing a scroll on which is a Latin inscription, 'Penser de Fyner'. The St Omer arms relate to Sir William's second wife, the daughter of Sir Edmund de St Omer.

Of course, there is more to All Saints than Admiral Nelson and the Calthorpe brass. The oldest parts of the building are Norman windows in the base of the tower, and the west tower door, all of which date to around 1200. The nave arcade is early 13th century, as is the Purbeck marble font, decorated with blind arcading.

All Saints is a wonderful historic church in a superb setting, full of Nelson memorabilia and a fabulous medieval brass. It is well worth a special trip to seek out. The church was open when we visited. 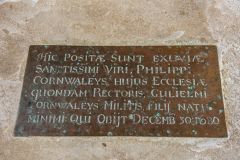 More self catering near Burnham Thorpe, All Saints Church

More bed and breakfasts near Burnham Thorpe, All Saints Church