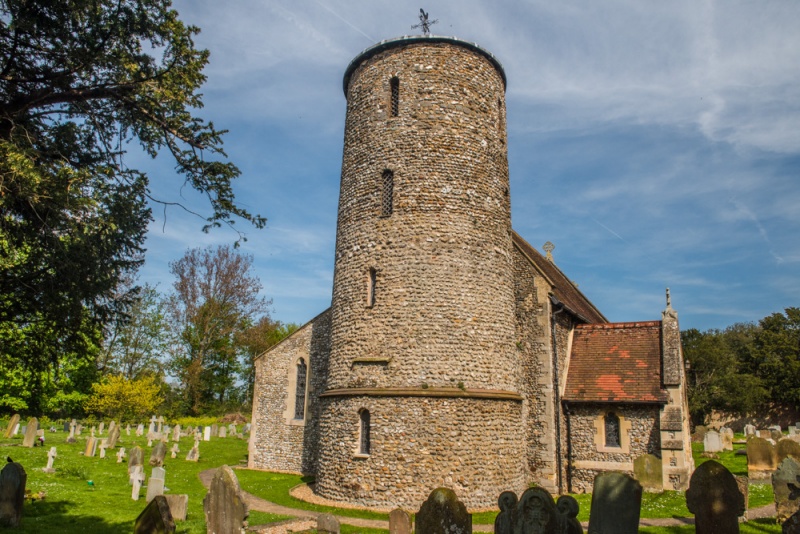 It is hard to tell where the neighbouring villages of Brancaster Staithe and Burnham Deepdale begin and end. The villages tend to blend into one another as they follow the North Norfolk shore and the A149 coast road through some of the most beautiful coastal scenery in England.

Between the two villages, and serving as the parish church of both, stands the ancient church of St Mary. Just how ancient is a matter of some debate. The round west tower has traditionally been thought of as late Saxon, perhaps erected in the early 11th century. A more recent theory is that the tower is early Norman, built shortly after the Conquest using traditional Saxon construction techniques.

Whatever its date, the tower is one of the most beautiful in Norfolk, a county blessed with a large proportion of Britain's round tower churches. Building on a round plan might seem counter-intuitive, but it meant that the masons did not have to deal with corners, and the structure was very stable. In the tower is a single bell, cast in the 15th century in Kings Lynn. 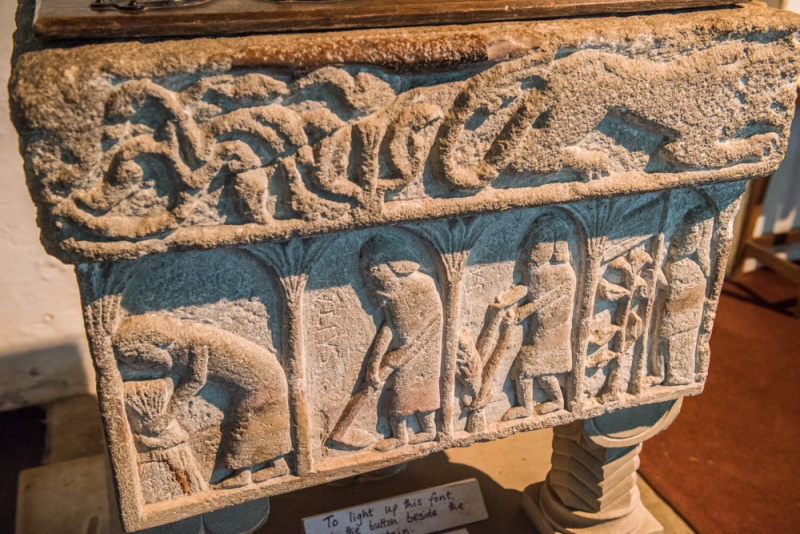 The Labours of the Months Norman font

The Labours of the Months Font

Apart from the tower, there are two historic treasures in St Mary's. The first, and most obvious as you enter the building, is a superb Norman font of Barnack stone, carved with figures representing the Labours of the Months. Each of the twelve figures depicts a different seasonal activity in the farming year. The font bowl is square, divided horizontally by a string course. The top section, above the string course, is carved with foliage on one side and on the other three by sinuous figures of lions.

Below the string course are the figures of the months. Most are men engaged in farming activities:

The Labours of the Months provide a fascinating glimpse into the lives that most people in Britain would have lived around the time of the Norman Conquest, a life that revolved around traditional seasonal activities, tied to planting and harvesting crops. The font carvings are not unique, but they are a superb example of Norman art. 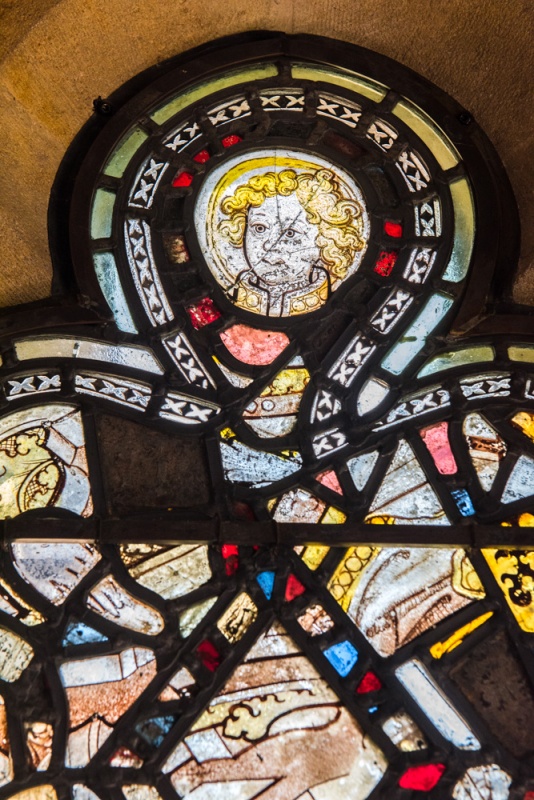 The Sun Window in the porch

The final historic treasure at Burnham Deepdale is a wealth of medieval stained glass. The Burnham glass is one of the most fascinating and best-preserved collections in East Anglia, if not in the whole of England. There are two stunning windows in the porch, one on either side of the passage.

The two windows are known as the Sun Window and the Moon Window for the small figures that appear in the top light of each. These windows may have been made to flank a Crucifixion scene. The moon figure is quite obviously a lunar body, while the sun is represented by a cherubic youth with curly golden hair. Mixed among the glass fragments is an inscription reading 'Death is thy sting'.

Inside the church are more beautiful medieval windows. In the north aisle is a stunning window decorated with richly coloured glass fragments. In the centre is a 'rose en soleil', or roses in the sun. Below this is a figure of St Ursula. At the base is the word 'Gelda', suggesting that the window was given by a guild.

On the west tower wall is a window with a figure of St Mary Magdalene in a pink robe, with a censing angel above. The deep blue borders around the figures are amazingly vivid. In the vestry is a window with fragments of 14th and 15th-century glass including a heraldic border.

What is so striking about the glass at Burnham Deepdale is the vibrant colour; the glass panels are so rich and vivid that they appear to have been made yesterday.

Aside from the medieval glass there are several windows with excellent Victorian glass including the large east window, designed by Frederick Preedy around 1873 as a memorial to Edward Blyth, a rector of St Mary's who died in 1855, and his wife Susannah (d. 1873).

Other historic features of the church include a Saxon tower arch with a triangular-headed window above it that certainly appears to be Saxon as well.

I've visited St Mary's several times, and each time I came I found the church open. It is an absolute delight to visit and I highly recommend it. 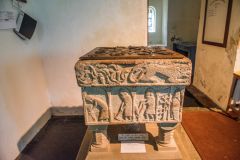 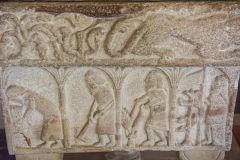 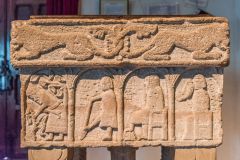 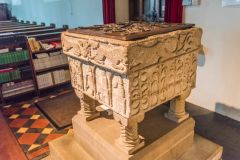 Self Catering near Burnham Deepdale