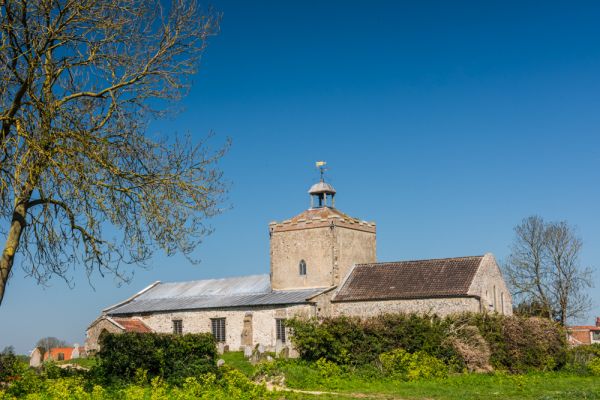 St Clement's church stands on a hill overlooking the River Burn. The village name means 'over the water', meaning it was across the river from the other Burnhams. The church was begun in the Norman period and was granted to the canons of Walsingham Priory in the early 12th century.

Unusually for Norfolk, the church has a central tower, one of just 14 medieval churches in the county with this layout. The original medieval tower became unstable in the 17th century so the upper stage was torn down, and extra arches inserted to brace what remained.

This gives the church interior a very peculiar look, with multiple arches and columns supporting the tower and giving access to the chancel, crossing, and transept. Atop the shortened tower is an attractive bellcote topped by a gilded weathervane. The belfry holds just one bell, cast by Richard Brasyer in the 16th century.

After the Reformation, the nave served as the parish church while the chancel was partitioned off to become the village school. Though the partition has been removed they are joined by a narrow passage through the base of the tower, so that instead of moving from the nave to the chancel you feel like you are leaving one building and entering a completely new one.

A 15th century south porch protects the 13th-century south doorway. Just inside the doorway, at the south-west corner of the nave, is a 15th-century octagonal font, recut from an original square Norman font. The wooden cover shows ornate ironwork.

Over the entrance door is a painted coat of arms to George III. It was originally made for one of the earlier Stuart monarchs, but you can see where the Stuart arms have been painted over with the Hanoverian ones.

Opposite the main entrance, in its traditional place on the north wall, is a faded 15th-century wall painting of St Christopher carrying the Christ child. St Christopher was the patron saint of travellers. so his likeness was placed where it could be seen by people entering and leaving the church.

The church was once much larger, but the north aisle and transept are gone, and the south transept has been truncated. 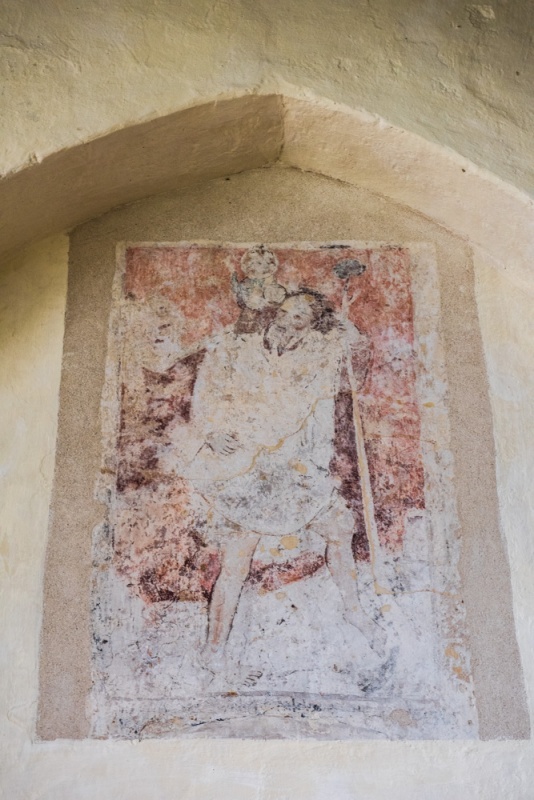 On the east nave wall is a painted set of Decalogue Boards, depicting the Lord's Prayer, Ten Commandments, and the Creed. The boards are dated to 1747/1748 and bear the names of the churchwardens at the time.

At the north-east corner of the nave is a lovely hexagonal wine glass pulpit carved in the the 18th century. As you examine the chancel look for the south arcade pillars, which lean outwards at a striking angle. Set into the floor by the easternmost pillar are the remains of a pillar piscina, of which only the bowl is left.

Also set into the floor is a memorial brass to Katherine Thurlow, dated 1516, and on the wall is a beautifully carved memorial to Robert Blyford (d. 1672). There are several extremely good 17th and 18th century grave slabs, including a finely carved example to John Thruston, who died in 1687. The epitaph tells us that he was 'aged fifty seven years ten weeks and odd days'.

Another very good grave slab is to Jane Harris (d. 1648). At the top of her grave slab is a carving of a pair of cherubic angels holding a crown, with the inscription Ecce Premiu. Over a nave arch is an elegant tablet to Thomas Armiger, a barrister of the Inner Temple in London, who died in 1707.

A short distance downhill from the church, at the centre of the road junction, is a medieval wayside cross, occupying its original position.

The church is usually open daylight hours. The first time I tried to visit I found it locked, and was unable to locate the keyholder, but I tried again a few days later and found the door open. Unfortunately, there is no obvious place to park; at least I never found one. I managed to pull just off the road onto the verge, but there must surely be a better option further away from the church. 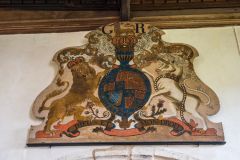 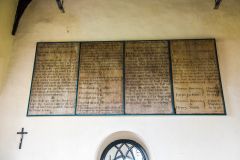 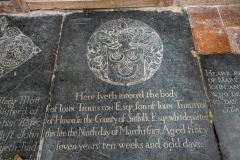 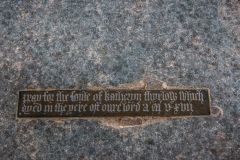