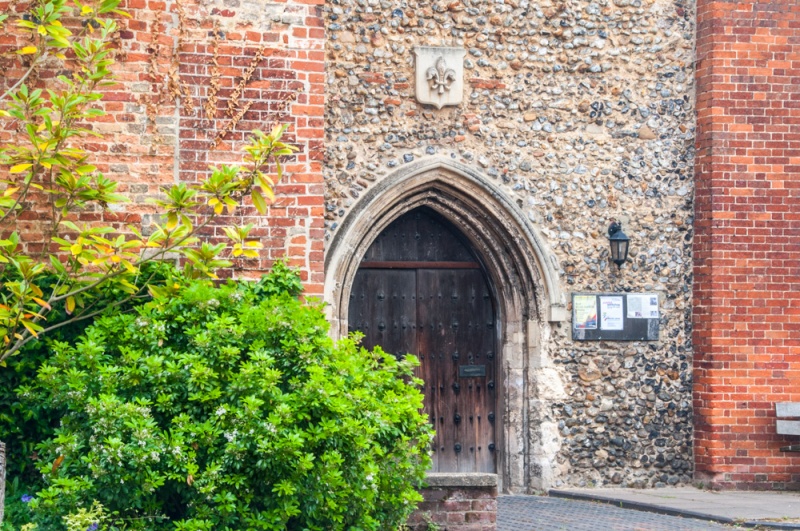 In 1107 a priory was founded at Wymondham as a daughter house of the Benedictine Abbey of St Albans. The founder was William d'Aubigny, who served Henry I as Chief Butler. In an odd twist, Henry's widow, Alice de Louvrain, later married d'Aubigny's son. The family connections do not stop there, for d'Aubigny's brother Richard was the abbot of St Albans.

In honour of the St Albans connection, the new priory was dedicated to St Mary the Virgin and St Alban. This latter dedication was later changed to St Thomas of Canterbury.

The abbey church was built with stone specially imported from Caen in Normandy, and was originally modelled on Norwich Cathedral. This was a large cruciform building with two western towers and a larger central tower. To the south of the church were ranges of domestic buildings. Construction on the priory was finished around 1130 when the first prior was installed.

Though the priory was a Benedictine monastery, the founder insisted that the church should also serve as the parish church for Wymondham.

Unfortunately, d'Aubigny did not spell out who should control what part of the building and how disputes should be resolved. Inevitable conflict arose between the townsfolk and the monks. The argument was referred to Pope Innocent IV in 1249, and the Pope rather wisely divided responsibility fairly equally, with the priory granted control of the south-west tower, south aisle, transepts. eastern chapels, and quire. The townsfolk for their part were awarded the nave, north aisle, and north-west tower. 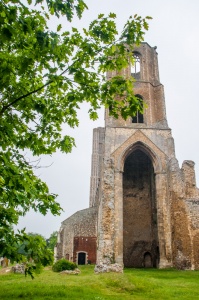 The central tower had to be rebuilt in the mid-14th century, and in the process the monks sealed off part of the new tower, effectively blocking access between 'their' church and the parochial church. In a tit for tat war, both sides sealed passages and seized control of tower access in turn. The townsfolk then carried the conflict further by seizing the Prior's Lodging and prevented him from saying Mass.

Henry IV asked the Archbishop of Canterbury to rule on the dispute, and the Archbishop came down on the side of the townsfolk and reaffirmed Innocent IV's division of the church. The townsfolk were allowed to hang three bells in the north-west tower but required not to ring them when it might disturb the monks.

Then the townsfolk petitioned the king for permission to build a new, higher tower so they could hear the bells more clearly. Sir John Clifton of Wymondham threw his support behind the project and in 1445 the two short Norman towers were taken down and replaced by a new west tower.

The priory became independent of St Albans and was raised to abbey status in 1448. This was a direct result of a petition by Sir Andrew Agard, a direct descendent of William d'Aubigny. The last prior of Wymondham, Stephen London, thus became the first Abbot.

In 1538 the abbey, like other monastic houses in England, was dissolved by Henry VIII. In an unusual move, Henry kept control of the abbey lands for a decade following the dissolution. He appointed an agent named John Flowerdew to administer 'his' abbey. This Flowerdew behaved in a high-handed manner, allowing his men to destroy parts of the church which the townsfolk had raised money to purchase and preserve for their own use. 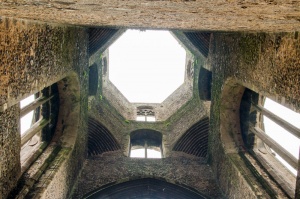 Inside the east tower

The ire raised by Flowerdew's actions helped galvanise support for the short-lived Kett Rebellion of 1549. The rebellion was led by Robert Kett, a Wymondham native, who objected to the enclosure of common land.

Though it gained some support in East Anglia, Kett's Rebellion was doomed from the start. Kett was arrested and hanged at Norwich. His brother William was hanged from the west tower of the abbey church here at Wymondham. As you look up at the ruined tower today it is sobering to recall this tumultuous time.

The former monastic buildings were pulled down and the stone sold for other building projects. Of the monastic buildings, only a solitary arch of the chapter house has survived. The church was not in a much better state; in 1573 Elizabeth I visited Wymondham and was so struck by the poor state of the sanctuary that she gave money for its repair.

The church continued to deteriorate until the early 20th century when a wealthy widow named Mrs Clara Willet donated over £14,000 to rebuild much of the interior in Anglo-Catholic style. Part of this rebuilding included the creation of a gilded screen designed by Sir Ninian Comper as a memorial to local men who died in WWI.

Other noteworthy interior features include a superb 15th-century wagon vaulted roof and 12th-century arcading in the nave. The sedilia is unusually made of terracotta and is similar to the terracotta memorials at Oxburgh church.

On the east wall of the south aisle is a curious stone corbel showing a pair of large, staring eyes - perhaps a relic of an earlier Saxon church? The finely carved octagonal font dates to about 1440, and there are numerous 17th-century memorials.

The most prominent surviving features of Wymondham Abbey are the two towers, at the east and west of the nave, which dominates the countryside for miles around. The east tower is an empty shell, accessible from the outside at any time, near a high archway that once linked to the chapter house. As you look up inside the tower towards the sky far above you cannot help but be impressed with the stepped corbels that help give the tower its striking, layered look. 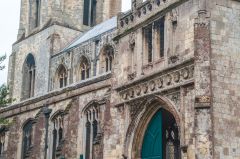 More self catering near Wymondham Abbey

Self Catering near Wymondham