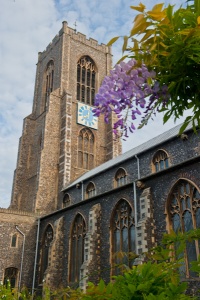 St Giles on the Hill

St Giles (often called St Giles on the Hill) dates to the 11th century, but the building we see today was rebuilt around 1400 in Perpendicular style. The founder was a priest named Elwyn, who gave the church to the Cathedral.

Then Theobald, archbishop of Canterbury from 1139-1161, appropriated the church to the monks of the cathedral. Income from the living went to the monk's infirmary, and they appointed a chaplain to serve the parishioners.

The church stands in the old French Borough, created by the Normans after the Conquest, and home to the wealthiest medieval merchants in the city. St Giles was the patron saint of lepers, and a leper hospital stood near St Giles Gate in the medieval city walls.

The most obvious feature is the striking west tower, which reaches 120 feet high making it the tallest in Norwich. The tower was used as a beacon, and you can still see the beacon basket used for holding firewood. 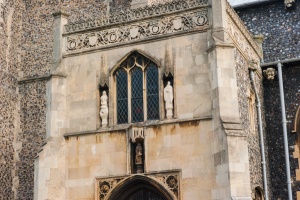 The Tudor porch and parvise

The tower, and most of the exterior, is of knapped flint, but the Tudor south porch is made of ashlar. The porch is two storeys high, with a parvise over the entrance. This small chamber was originally a chapel dedicated to St Christopher. The porch itself has a lovely fan-vaulted ceiling.

Though most of the nave is original, the chancel was completely rebuilt in the Victorian period. The hammer-beam nave roof is one of the best interior features; it has carved angels holding heraldic shields with the arms of both England and France.

One fascinating historic highlight is five mace stands set on the ends of pews. These stands were used to hold maces of office by mayors resident in the parish. The fact that there are 5 of them speaks volumes about the wealth of the parish, especially in the late medieval period. Each stand is decorated with the coat of arms of the mayor. 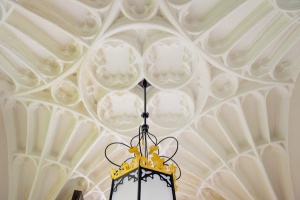 Of the interesting memorials inside St Giles are a couple of medieval brasses, one to Robert Baxter (d. 1424) and another to Richard Purdaunce (1436). There is a brass inscription to Elizabeth Bledingfield (d. 1637) though the effigy is gone, and part of a brass to John Smith, showing a goblet, or chalice.

There is a grave slab to Thomas Carter, showing avery nicely carved coat of arms, and a mural monument to John Beevor (d. 1815), who outlived two wives, two sons, and5 children who died in infancy.

St Giles Street seems to have attracted successful physicians, so many that it became known as The Harley Street of Norwich. Many are commemorated by monuments inside St Giles. Among these is Thomas Churchman, 1702-1781, who left £1300 to charity when he died. Churchman was mayor in 1761 and received a knighthood from George III after he presented an official congratulation to the king on his marriage.

There is a very battered iron-bound parish chest, and an octagonal font with wonderfully carved faces on the angles. There are 2 brass eagle lecterns; one is Victorian, but the other dates to the 15th century. This must be among the oldest brass lecterns in the country.

St Giles has very limited opening times. When we visited this was only a few hours one day a week; which is strange because when we did visit we were greeted by some extremely friendly parishioners who took great pride in the church and were keen to point out the most interesting historical features. I found the interior wonderfully spacious, with the high clerestory letting it loads of light, and making it easy to see the wonderful hammer-beam roof and carved angels. This must be one of the best roofs in Norwich - quite a claim since there are so many historic churches in the city! The roof was probably the highlight for me, along with the 15th-century eagle lectern, which was so beautifully crafted that it could pass for Victorian. 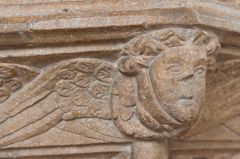 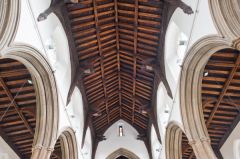 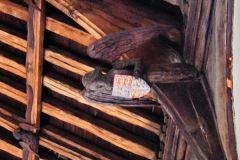 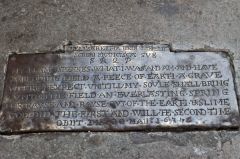 Nearest Accommodation to St Giles on the Hill:

More self catering near St Giles on the Hill

More Hotels near St Giles on the Hill

More bed and breakfasts near St Giles on the Hill