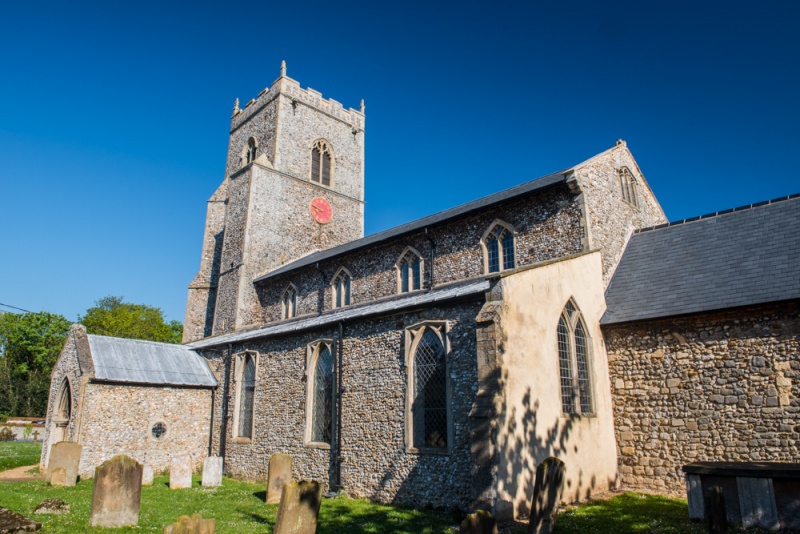 St Mary's is a familiar sight to travellers along the A149 road that hugs the North Norfolk coast. The church was begun in the 12th century but most of the present structure dates a complete rebuilding in the 14th century when the nave was rebuilt and the west tower was begun. A clerestory was added in the 15th century and the entire church was restored from 1831-1833.

The oldest section of the church is the south chancel wall, which incorporates re-used Roman masonry blocks from the 3rd century Roman fort of Branodunum, which lies just east of the village.

The volume of conglomerate masonry suggests that there was a Saxon building on the site, and historical records show that King Edgar (reigned AD 959-975) granted a church in Brancaster to Ramsey Abbey. Excavations have also unearthed a 4th-5th century Romano-British cemetery with evidence of Christian burials.

The re-used masonry also incorporates a window sill and jamb which may be Norman. If you look closely you can see that the jamb and sill have been drilled with small holes used to affix a thin cloth as a window covering. In the days when window glass was prohibitively expensive cloth was often used to cover windows but seldom will you see such a clear example of how the window frame was used to hold the cloth in place.

The porch was built around 1300 and boasts a pair of unusual round windows. Curiously, only one face of the windows is circular, while the other face has quatrefoil tracery with an inner circle. The windows on the south nave wall are very unusual, rather like wide lancet windows. They were likely installed during a 17th century restoration. 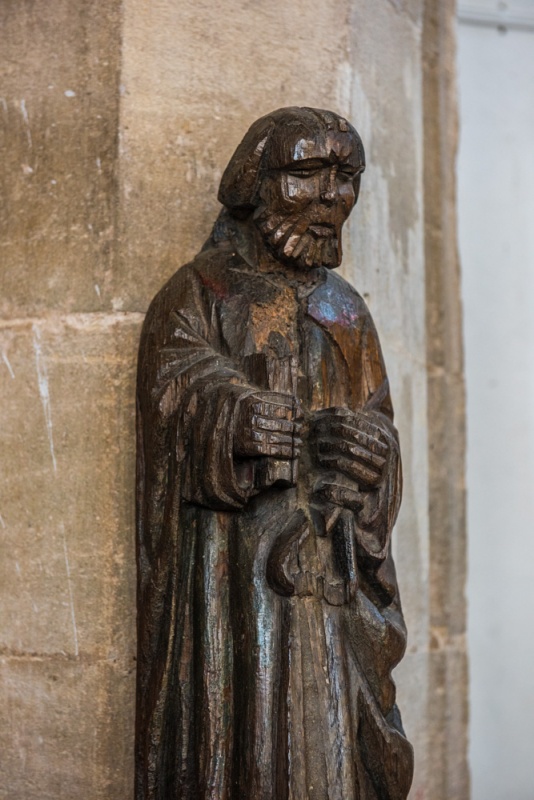 Inside the church, the arcades and chancel arch date to roughly 1400. By the north and south doors are 17th-century almsboxes made from tree trunks. Over the vestry door is a royal coat of arms to William IV, dated 1832.

Set into the floor are 4 medieval brasses. One is to a former rector named William Cotyng, who died in 1485. The brass appears to have been made during Cotyng's lifetime, with space left for the date of his death. A later brass is to Robert Smith, who died in 1596 and left money to found a school, almshouses, and a coal charity. The school and almshouses still stand, near the church. The school is now Church of England, but the coal charity and almshouses are both still administered by the Robert Smith Trust established in 1596.

Near the pulpit are a pair of brasses, one to James Habbys, a rector who died in 1519, and the oter to a merchant named William Tyler, who died in 1641. Set into the floor is a ledger slab to James Willis, dated 1719. On the wall is a fascinating memorial to Mary Foley, who died in 1808 at the age of just 28. The touching epitaph is a wonderful example of 19th century sentimentality. It reads:

Whilst friendship truth, with wedded love combin'd,
Hold sacred influence o'er a Husband's mind,
Whilst recollection's faithful powers impart,
Its pains and pleasures to a husband's heart,
With mixed emotions must his bosom swell,
Foley! who thus thy varied worth would tell,
Grieve for his loss but if like thee prepar'd,
By Christian virtues, for their bright reward,
He, thou, may hope, his earthly trials o'er,
In Heaven to meet Thee: and to part no more.

Look for the diamond shaped wooden clock set high on the west wall. This was intended to be visible to the preacher, but not to the congregation, so the preacher was aware of how long to make his sermon. Inside the south door is a beautifully carved figure of St Matthew, thought to have been fixed to a wallpost of the original medieval hammer-beam roof. 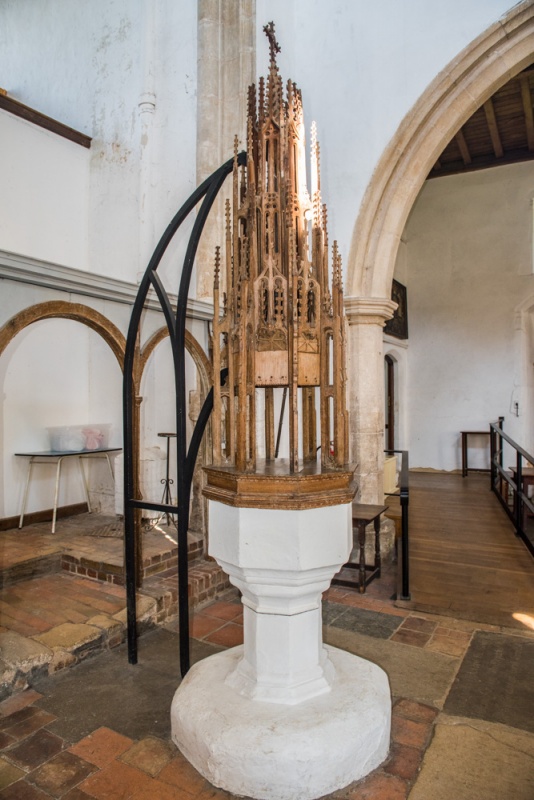 The 15th-century font and its extraordinary 1493 cover

The striking east window is Victorian, installed in memory of Muriel Daubeney, the rector's wife, who died at 34 in 1907. Look for her likeness in the lower right panel, holding a violin. At the east end of the nave are a collection of medieval floor tiles.

In a glass display case is a Queen Anne prayer book printed in 1706. It still has its original page marker, now more than 300 years old. Also on the wall is a painted board with a list of lives saved by the Brancaster Lifeboat, including 14 crew members of the barque Lydia, which floundered offshore in 1881.

The most interesting historic feature is the late medieval font and its ornately carved wooden cover. The cover dates to 1493 and was made after a bequest by Walter Bodham. The remarkably ornate cover is a symphony of pinnacles and crockets, but what is amazing is that it was made to lift up inside itself like a telescope folding up.

The tower holds one bell, recast by Thomas Osborn of Downham Market in 1791. 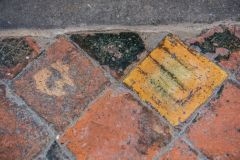 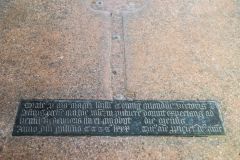 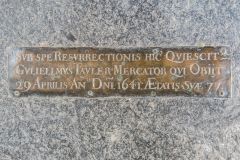 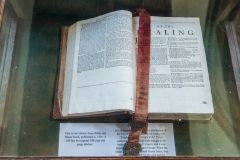 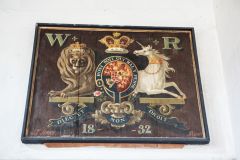