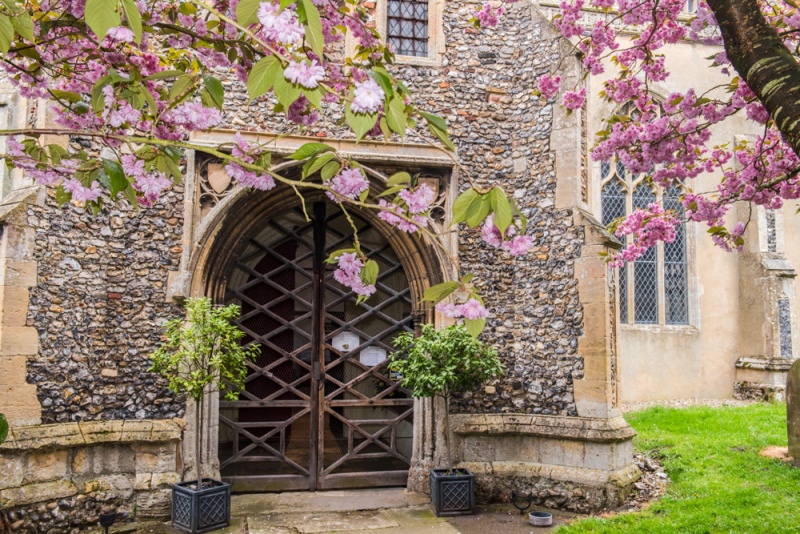 St Agnes Church in Cawston is one of the most beautiful and exciting historic churches in Norfolk. Thousands of visitors are drawn to Cawston each year to see the superb 15th-century hammer beam angel roof, and the glorious late medieval painted screen.

The church was built by Michael de la Pole, Earl of Suffolk, in the early years of the 14th century. The De la Pole arms adorn the porch and tower. The tower is stunning, standing almost 120 feet high, but unlike most Norfolk towers it is relatively plain, without all the pinnacles that grace so many other towers in the county.

Cawston's angel roof is one of the finest in East Anglia, a stunning example of medieval craftsmanship. It is steeply pitched, to a single hammer-beam design, The beams are adorned with huge wooden figures of angels, standing over 6 feet high. Unusually, the angels do not project at a diagonal from the beam ends, but stand completely upright on the beams. The spandrels above and below the beams are simply exquisite, and a row of demi-angels run along the wall plates.

One of the most intriguing roof angels stands eight feet high and wears a costume made of feathers from head to toe. Actors in medieval mystery plays often wore feather costumes to portray angels, so the symbolism would have been obvious to a medieval audience. Some of the angels bear races of their original paint.

Were the de la Pole's responsible for the angel roof? It is tempting to think so, but the architectural evidence suggests not. The Earl died at the siege of Harfleur in 1415 and his son and heir died at Agincourt just five weeks later. The Earldom went to his second son William, who rose to a position of power at the court of Henry VI.

He became one of the most influential men in England, and was named Duke of Suffolk before he fell from power and was murdered in 1450. We know from documentary evidence that the church interior was being refurbished in the 1460s, and on stylistic grounds, the roof may date to as late as 1480, long after the de la Poles fell from power.

In the south transept is an early 15th-century wall painting of the Virgin Mary enthroned, attended by a pair of kneeling priests. The Virgin's hand is raised in blessing and she carries an open book on her lap. One of the kneeling priest figures depicts Jon Bridale, late 14th-century vicar of Wood Dalling, whose faded name is inscribed below his figure. Presumably, Bridale and the other, unnamed priest, were the donors responsible for the painting. 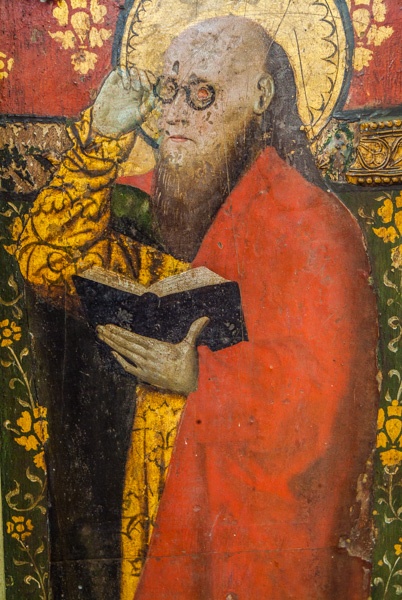 St Matthew with his spectacles on
the 15th-century screen

In the chancel are three surviving 15th-century misericords, or 'mercy seats' for helping clergy stand during long services. One shows a pair of women facing each other, with a pair of faces in the foliage on either side. Another shows a man's head, with animal masks in the 'supporters' on either side. The final misericord shows a stag's head in foliage, and in the supporters is a hound's head with its teeth barred, looking towards the stag.

In the south transept is a fascinating piscina with a spandrel carving showing a bird with a wolf's head and a naked figure with an oversized beard.

Other treasures include a beautifully painted 15th-century chancel screen. The screen is divided into panels, with paintings of the Doctors of the Church, apostles, and other Biblical figures. One of the panels shows St Matthew wearing a pair of spectacles. This is thought to be one of the earliest depictions of spectacles in England.

Another unusual painting shows Master John Shorne, a 13th-century rector of North Marston in Buckinghamshire. Marston was credited with healing an epileptic woman by exorcising her to drive out the Devil, who he caught in a boot. This gave rise to a rhyme reading, 'Sir John Shorn, Gentleman born, Conjured the Devil into a Boot'.

After his death miracles were reported at his shrine, and Shorn was canonised. Given the story of catching the devil in a boot is perhaps not surprising that Shorne became the patron saint of bootmakers Other historic highlights include a wooden poor box, 15th-century carved bench ends, and a magnificent Perpendicular font with a counter-weighted pulley system for raising its ornately carved wooden cover.

Near the chancel arch is a worn parish chest carved from a single tree trunk. On the chancel wall is a memorial to Major James Baker, son of Cawston's rector, who died while fighting against Napoleon at the Battle of Toulouse in 1814, 'gallantly leading his men against an intrenchment'.

The restored chancel ceiling is beautifully painted, with a marvellous series of painted bosses. In a nave window are gathered fragments of medieval glass, including an angel, again recognisable by its feather costume, apparently playing a form of keyboard instrument. Near the chancel arch is a superbly carved Jacobean wine-glass pulpit.

One very unusual feature is an old inn sign hanging in the nave. It shows a plough with two horses and a farmer in the background, and an inscription reading, 'This sign of The Plough Inn at Sygate was given to Cawston Church by Messrs Steward & Patteson Ltd. May 1950'. Fittingly, the sign stands above an actual plough.

Outside the churchyard is a memorial to the crew of the Lucky Strike, a Flying Fortress bomber that crashed on 5 January 1944, killing two men.

St Agnes Church is a magnificent example of a historic country church, set in a pretty Norfolk village. The combination of the outstanding angel roof and the painted screen make it an unmissable historic attraction. I've visited twice, and each time I saw new things to enjoy. 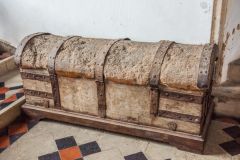 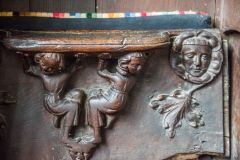 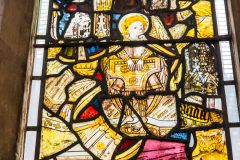 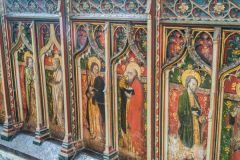 Self Catering near Cawston