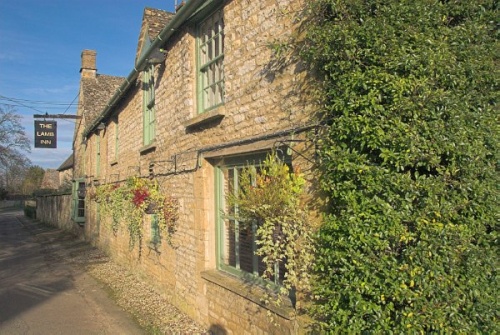 The Lamb Inn, Shipton under Wychwood

There are three Wychwoods spread out along the Evenlode valley. The largest is Milton, the smallest is Ascott, famous as the home of the 'Ascott Martyrs'. The middle of three Wychwoods, both geographically and in size, is Shipton under Wychwood.

The town's name refers to the fact that it used to be 'under' the boughs of the ancient Royal Forest of Wychwood. Some remnants of the forest remain, around Ascott and nearby Leafield, but for the most part, this is open Oxfordshire farmland, with green fields separated by hedgerows and stone walls. 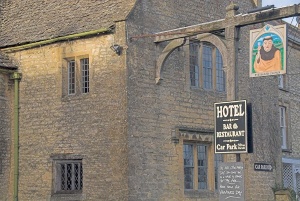 Shipton was a royal manor prior to the Norman invasion. The village is based around a very large green. To the south of the green is the lovely 12th-century church of St Mary the Virgin. The church is built upon the site of a Saxon minster, but most of the current building is 13th century, with a lovely spire topping a gabled tower.

Within the church are marble monuments to the Reade family of Shipton Court, a 16th-century palimpsest, or reused brass memorial tablet, and a 15th-century font given by the Earls of Warwick. Click for further information on St Mary's church.

Beside the church is Old Prebendal House, a Grade 1 listed building that is now a care home. At the north end of the green is a pyramidal memorial to the 17 men, women, and children of Shipton who lost their lives in the wreck of the Cospatrick in 1874, while on their way to a new life in New Zealand.

Across the High Street from the green is The Shaven Crown, a 14th-century inn that claims to be among the ten oldest inns in England. This is, apparently, the only inn so named in all of England. The shaven crown, as the inn sign shows, refers to a monk's tonsure, a reference to the fact that the inn was founded by the monks of nearby Bruern Abbey.

The Abbey is no more, a victim of Henry VIII's Dissolution of the Monasteries, but its presence is recalled in a number of house and street names. For example, a cottage just a few doors away from the Shaven Crown is called 'Monk's Gate'. 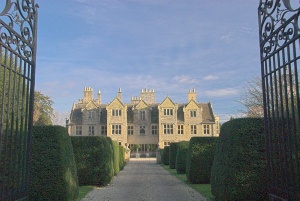 Shipton Court, one of the finest
Elizabethan manors in the country

Back to The Shaven Crown. Its original purpose was as a hospice for the poor, and as accommodation for pilgrims visiting the Abbey. After the Dissolution, the inn was claimed by the crown and was used as a hunting lodge by Elizabeth I.

The Crown then returned the building to the village of Shipton, with the interesting proviso that it must operate as an inn, with the proceeds to be given to the poor. It retains its original 14th-century gateway and many original interior features.

Walking up the High Street from the green, you come to a high wall, and then to ornamented gates. This is Shipton Court, a lovely Elizabethan manor, one of the largest in England, and still in use as a private residence. The house was begun in 1603 by Sir Rowland de Lacy. Several subsequent owners of Shipton Court have monuments in the church.

Just a few steps from Shipton Court is The Lamb Inn, a lovely old building of Cotswold stone. The inn, which offers luxury accommodation, dates back to 1580. The Oxfordshire Way trail passes near the village, but a newer signposted trail, the Wychwood Way, creates a 40-mile circular path following public rights of way through the old Royal Forest of Wychwood.

Nearest Accommodation to Shipton under Wychwood:

More self catering near Shipton under Wychwood

More Hotels near Shipton under Wychwood

More bed and breakfasts near Shipton under Wychwood