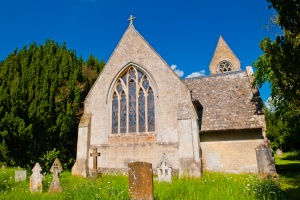 The peaceful Oxfordshire village of Little Tew was once a battle-ground. Not literally, though it might have seemed that way to the Victorian vicars of nearby Great Tew. For, in the mid-Victorian period, there was no church in Little Tew, and villagers had to journey to Great Tew on the hill above to attend services.

So when non-Conformist preachers came to the area, they found a willing flock of listeners. A Baptist chapel was built in Little Tew in 1829, and quickly gained a large following, drawing worshippers from across the area.

Despite the fact that Exeter College, Oxford, was willing to donate land to build a new Anglican church, it was not until 1851 that the situation changed, when a new curate was appointed at Great Tew.

This was Keegan Paul, who would later go on to found the successful publishing house, Keegan Paul & Routledge. Moved to combat what he called 'the high levels of nonconformity' in the village, Paul convinced the Oxford Diocese to create a new parish at Little Tew.

The diocesan architect was GE Street, who would go on to be one of the most famous Victorian architects. Paul commissioned Street to design 'a very pretty church, chapel like, consisting of a chancel, a nave, under a continuous pitched roof, with a smal vestry and porch to cost a very small amount'. 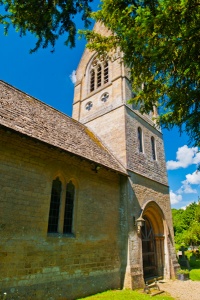 That 'small amount' was to be no more than £550. Of this, £110 was raised from the diocese and the Society for Promoting the Enlargement, Building, and Repair of Churches andChapels. The remaining £440 seems to have been donated by the Boulton family of Great Tew Park. Paul also convinced Eton College, where he had once served as master, to donate land for the new church.

Building began in 1852, and the parish became independent in 1858. The first vicar was Rev. Charles Garratt, a man of great enthusiasm and a sworn enemy of nonconformist worship. Garratt was the son of a Lord Mayor of London, so he had the private resources to make the most of his convictions.

Under Garratt church attendance doubled, drawing 120 people to evening service out of a population of 250. He built a north aisle and installed an organ at his own expense, which must have helped, as did a new heating system! Garratt also erected the village hall, and served as vicar until 1880. 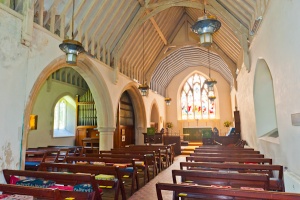 Reminders of the Garratt family are everywhere inside the church, in memorials, tombs, and stained glass. One of the Garratt memorials is to Captain Geoffrey Garratt, who served in the Indian Civil Service, acted as a war correspondent, a farmer, and a historian. He was a member of the Indian Cavalry in WWI and was awarded an MBE for conspicuous gallantry in 1942, while he as serving with the Pioneer Corps. He died on duty at Pembroke Dock in 1942.

There is a memorial to Charles Eustace Garratt, who was born in Little Tew in 1861 and served in the Boer War, and later with the Red Cross in WWII. He died in 1921 in New York, and his family erected this monument to him in his birthplace. 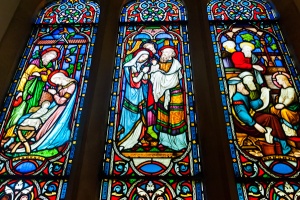 The east window, which sheds such a colourful light around the dim church interior, was dedicated to Susan Garratt in 1872 by Rev Garratt, who also installed the south wall window in memory of his father John (d. 1856).

Aside from the stained glass, which tends to dominate the interior is lush Victorian colours, the other highlights include a stepped Victorian font, carved stone pulpit, lovely 19th-century tiles, and a wonderful vaulted roof.

St John's is not a stunning architectural wonder, nor blessed with great historic interest, but it is a wonderful slice of English village life, a reminder of the Victorian period when Nonconformists and Anglicans battled for the attention of villagers, and people with the zeal and resources to create a 'personal' church, could do so, and see it last and flourish.

The interior is pure Victoriana, in the best possible sense, with rich, lush colours and carving detail. And the setting in the wonderfully attractive village is as delightful as you could possibly ask for. 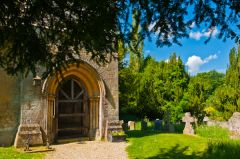 More self catering near Little Tew