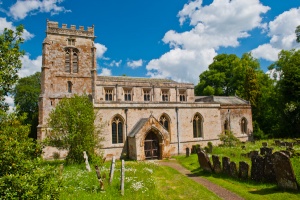 The historical features at Great Tew begin long before you reach the church itself. The church is tucked away down a long grassy terrace bounded by ha-ha's and reached through a beautifully carved 17th-century gate on New Street.

The gate was erected by Lucius Carey, Viscount Falkland, who served as Secretary of State to Charles I. Carey laid out the sunken gardens and carriage ride that now serves as the footpath to the church.

You enter the church through a beautifully carved Norman doorway, decorated with traditional zig-zag carvings. The columns flanking the doorway have wonderfully carved capitals with foliage patterns. On the west wall of the porch is a blocked twin lancet window.

Just inside the door is a very nicely carved 15th-century font, while set against the nearby pillar is a marvellous 15th-century eagle lectern carved from blackened wood, looking like a ship's figurehead.

The interior is flooded with light from high Perpendicular clerestory windows. The nave is supported on slender 14th-century pillars which stand on much earlier bases.

The Wall Paintings - The Passion Cycle

This fascinating series of paintings on the south aisle wall is primarily in black, red, and pink, and dates to the 14th century. The artist was probably a simple draftsman, copying composition from a secondary source, for the figures show no sense of proportion or scale.

At the top of the wall is a scene of St Michael weighing souls to determine their worth. Other scenes in this series include the entry into Jerusalem, the washing of feet, the betrayal, crowning with thorns, Pontius Pilate, flagellation of Christ, carrying the cross, the Crucifixion, Deposition, Entombment, the Harrowing of Hell, Resurrection, and 'Noli me Tangere' (when Mary Magdalene recognised the risen Christ). 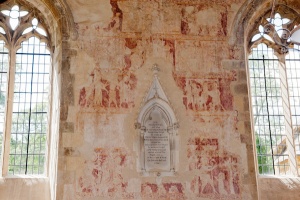 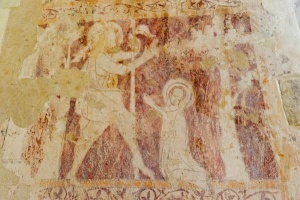 The 'Noli me Tangere' scene 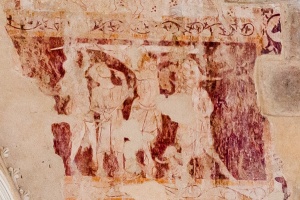 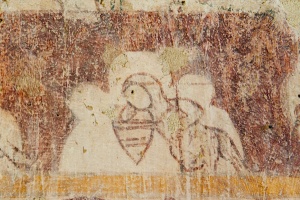 A curious figure amidst the paintings!

Tucked away in the vestry is an effigy of a 14th-century knight, thought to be Sir Robert de Vere. This is one of only four effigies in England where the figure is depicted wearing aillettes, a form of medieval epaulettes (the others are at Clehonger, Ashby Sandwich, and Maltby). The sword is unfortunately broken, but there is a rather attractive carved figure of a dog at his feet, looking more like a lion than a domestic pet! 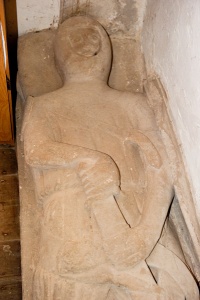 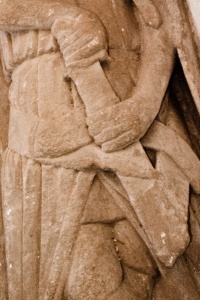 Detail of the de Vere effigy

In a low niche set into the north wall is an effigy of an abbess, thought to be Abbess Margery Dyve of Godstow, who lived 1316-1355. Margery is thought to be the window of Sir Robert de Vere, who committed herself to Godstow after her husband's death. 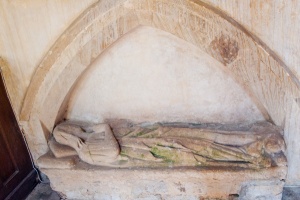 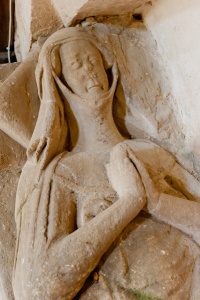 As soon as you approach the spacious chancel there's no question where your eye will turn first; set against the north wall is a stunning memorial to Mary Anne Boulton (1795-1829), wife of Matthew Boulton. The memorial was carved by Sir Francis Chantry in 1834.

If this was not 'merely' a funerary monument it would be a celebrated sculpture in its own right. It portrays the deceased reclining, a book in her lap, her head falling to one side in an attitude of melancholy; or perhaps she's just slipped off to sleep. The style is pure 19th-century sentimentality, but it works, for the sculpture is superb. 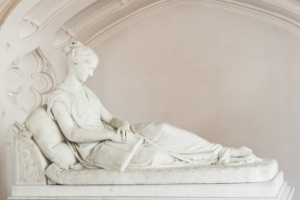 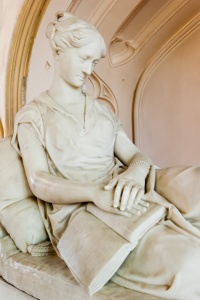 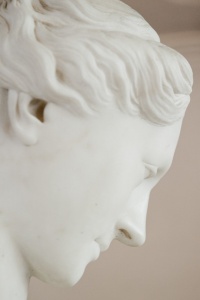 Opposite the Boulton memorial on the south chancel wall is a memorial to Viscount Falkland, erected in 1885, though the Viscount died in 1643 at the Battle of Newbury. The 2nd and 3rd Viscounts are buried under the chancel at Great Tew, but there are no tombs.

East of the Falkland memorial, near a tall medieval sedilia, are brasses to Sir John and Lady Alice Wilcotes (d. 1410).

Beside the Wilcotes brass is another to William and Agnes Busby (1513), and it is interesting to compare how the style of the brasses changed over the century between the two brasses. Also on the south wall is a trinity brass inscribed to William Reynsford (1487). 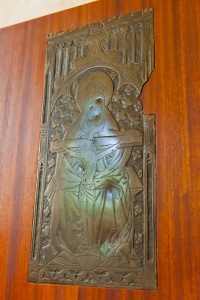 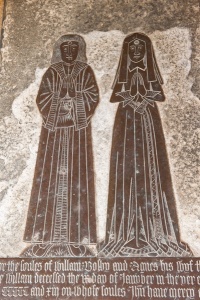 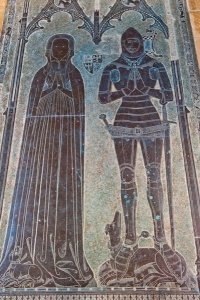 The 15th-century benches at Great Tew are wonderfully carved, and each pew end is unique. The three-decker pulpit has more excellent carving. High on the nave walls are a profusion of 18th-century funeral hatchments to members of the Keck and Tracy families of Great Tew manor, and further hatchments to the Stratton and Boulton families. 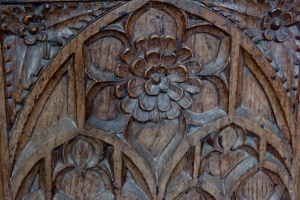 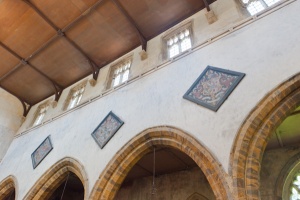 Funeral hatchments in the nave 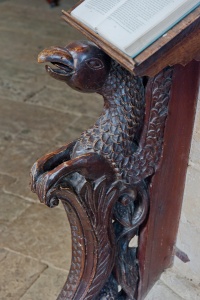 St Michael' church mystifies me. What I find extraordinary is that it isn't better known. Given the wealth of historic features, it ought to be near the top of every list of historic places to visit in Oxfordshire.

Yet it remains a hidden treasure, tucked away in a dell, obscured from the nearby roads. If you weren't looking for it, you'd never find it, despite the fact that Great Tew village itself has a deserved reputation as one of the prettiest villages in the Oxfordshire Cotswolds, and draws a steady stream of visitors to see its lovely thatched cottages.

The church is spacious and full of light, but more impressively, it is full to bursting with historic interest. The wall paintings are stunning, the carving is beautiful, the memorials equally fascinating, and there are carved corbels, funeral hatchments, beautifully crafted capitals ... the list just goes on and on! 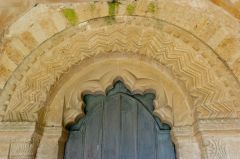 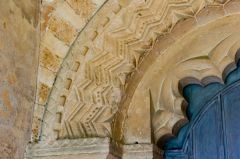 More self catering near Great Tew

Self Catering near Great Tew