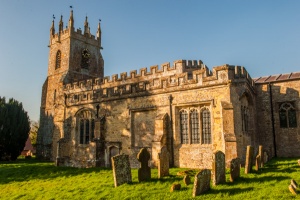 Rarely have I enjoyed a church so much as St James, Somerton. The church stands on a rise of ground on the south side of Church Street, looking out over the Cherwell Valley. The path leads past a gnarled apple tree, which was bright with pinkish blossoms when I visited on a sunny Spring day, then passes a medieval preaching cross on a stepped plinth.

There has been a church at Somerton since at least the 11th century, and the current building bears evidence of work from then through the 16th century. The oldest part of the church today is a blocked Norman doorway in the south nave wall, built shortly after the Norman Conquest. This was likely the original church entrance.

The nave dates to the 12th century, with an arcade of Transitional Gothic piers and later 14th-century arches. The north aisle was built around 1200 and the chancel a century later. The tower is 14th century, with the striking addition of a Crucifixion scene carved from white limestone, set into the north tower face.

Also 14th century is the south aisle, which was transformed in the 16th century into the Fermor Chapel. And it is the Chapel that must be mentioned first, for it truly is exceptional. 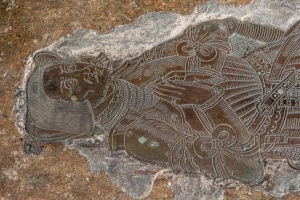 The Fermor family purchased Somerton manor in 1512, and stayed until 1642 before moving to Tusmore Park. Even then, family members continued to be buried at Somerton. The first Fermors at Somerton were William and his wife Elizabeth Norrys. Their beautifully preserved memorial brasses are set into the top of a tomb chest next to the screen that separates the chapel from the chancel. William Fermor was married four times but had no children.

On the south wall, opposite the brasses, is a table tomb with effigies of William's heir, Thomas Fermor, and his wife Brigitta. Thomas was lord of the manor at Somerton from 1552-1580 and founded a school which existed for 400 years.

We know a remarkable amount about the tomb, which was made by Richard and Gabriel Roiley of Burton on Trent, who were paid the sizeable sum of £40. Look on the tomb base and you will see four 'weepers'; one of them a very touching image of an infant wrapped in swaddling clothes, presumably in memory of a child who died shortly after birth. One very amusing touch is a tiny carved dog toying with a ribbon on Brigitta's dress.

Immediately beside the Thomas and Brigitta Fermor table tomb is a grandiose monument to their son Richard (d. 1642). The contrast in style between the two tombs could not be more striking. Richard Fermor's effigy lies in stately repose under a Renaissance canopy.

Opposite Richard Fermor's elegant tomb is another in a similar style to his eldest son, John, who predeceased his father, dying in 1625. Unlike his father, John is shown reclining, under a melancholy Latin epitaph.

Set into the chapel floor are gravestones to more Fermors and their relatives, including Colonel Thomas Morgan, who died at the Battle of Newbury in 1643. Morgan must have been a staunch Catholic and Royalist, for Parliamentary records declare him to be a 'notorious papist and delinquent'.

Parliament seized Morgan's estates and granted them to the family of John Pym. Pym's descendants complained that they could not get their hands on the rents from Morgan's properties, because the tenants insisted on paying to the Morgan family!

The west wall of the chapel has some very nicely crafted mural monuments by JG Lough, in classical style, with Greek and Roman symbols like draped urns and columns, and grieving family members clustered around a central figure.

One touching memorial shows Philippa Dewar (died 1853) being helped towards heaven by an angel as she clutches an infant; indicating that she must have died in childbirth. Also on the west chapel wall are three 18th-century hatchments, the earliest to Henry Fermor (d. 1746). 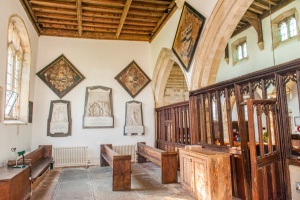 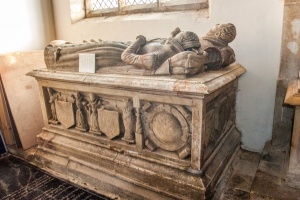 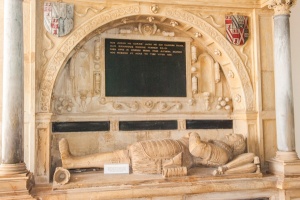 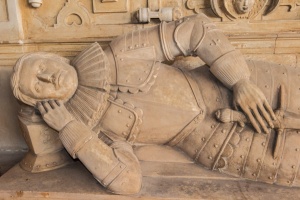 One of the most fascinating historic features is a remarkable reredos panel set on the east wall behind the high altar. This dates to about 1400 and depicts the Last supper in superb detail. None of the figures is static; each seems to be caught in mid-gesture, pouring wine, or, in one case, refusing an extra drink.

The one exception is the figure of John, show with his head in Jesus' lap. Though there is some obvious wear to the carved figures, the reredos is in remarkable condition, save for one damaged area immediately below the figure of Christ. This may originally have held a carving of Judas Iscariot. We owe its preservation to the fact that it was taken down and hidden during the worst Puritan iconoclasm of the 17th century and only brought out again in 1822. 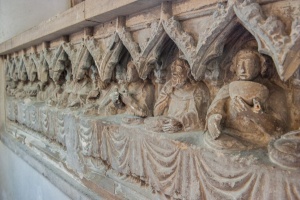 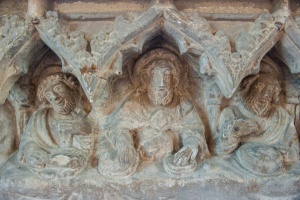 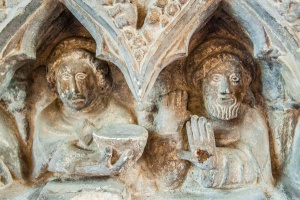 An apostle refusing a drink

To the south of the altar is a 14th-century three-seat sedilia. Also in the chancel, several of the benches incorporate medieval carvings. The benches themselves are 19th century, by Arts and Crafts carver Henry Wilson.

The wooden rood screen is an exceptional piece of late 15th-century woodwork, with beautifully carved detail. Most of the upper section is original, though the lower part has been heavily restored.

On the lower left of the screen is an intriguing armorial panel dated 1632, with four carved heads, the arms of Bishop Juxon, onetime rector of St James who accompanied King Charles to the scaffold. In the nave is a marble wall monument to William Mynn, another prominent local Catholic.

In the south-west corner is an ancient turret clock mechanism, probably dating to the 17th century and regulated by a system of weights and pulleys. The clock never had a face; it simply rang a tenor bell every hour. Nearby is the rather peculiar hexagonal font, atop a later base. The shape of the bowl is so unusual that some experts think it might originally have been part of a cross base.

What an amazing church! I simply didn't want to leave. Everywhere I looked there seemed to something fascinating. There were very useful signs, including translations of the Latin inscriptions on the Fermor tombs, but even so there were so many interesting features that I could only guess at. There really is a lot to enjoy in this wonderful historic church. 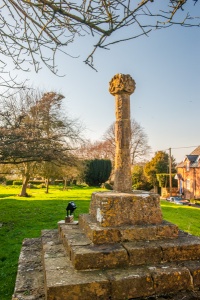 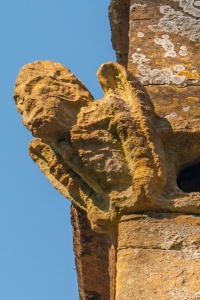 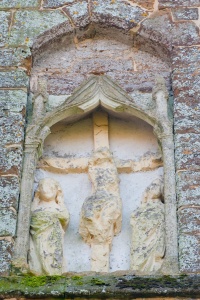 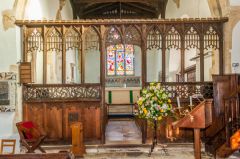 More self catering near Somerton

More bed and breakfasts near Somerton