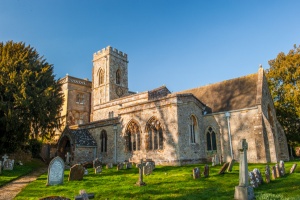 The church of St Mary stands immediately beside North Aston Hall and is reached through the beautiful estate surrounding the Hall. There was a church here at least as early as 1151 when we have a record that William de Aston granted it with some land to Bradenstoke Priory in Wiltshire.

The current church dates almost entirely to the 14th century, however, mainly in Decorated Gothic style. A later Perpendicular clerestory was inserted in the 15th century to create a more spacious, light-filled interior.

The Anne family leased the North Aston estate from Bradenstoke Priory in the late 15th century. However, things did not pass smoothly between the Annes and the Priory; the Prior complained that they were mismanaging the estate and denying him access.

Around 1485 the lord of the manor, John Anne, took stone from other buildings owned by the Priory to create the striking tower. Since the church stands so close to the nearby Hall, the only way to make the tower fit the site was to insert it partially into the nave.

And that raises the obvious question; why build the church and Hall so close together, so close, in fact, that they almost infringe on each other's foundations.

The likely answer is that the Hall was built atop monastic buildings erected by the monks of Bradenstoke, who would naturally have built adjoining the church, if not actually connected to it. The priory would have had some form of monastic presence at North Aston from the 12th century until the Dissolution of the Monasteries.

So, when the monastic buildings passed into private hands and the new Hall was built, it was placed on the site of the medieval buildings, practically jostling for space with the church itself. 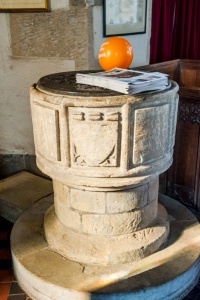 The church was restored in 1711 by Lady Katherine Howard, who was then renting the Hall. Her 'improvements', which included whitewashing the walls and painting the roof, did not meet with popular approval, but the worst of her excesses were removed by George Gilbert Scott in 1866, on behalf of William Foster-Melliar, who purchased the North Aston estate in 1862.

There can be no question about the most fascinating historic feature of St Mary's; it is the late 15th-century alabaster table tomb of John and Alicia Anne, found between the south chapel and the chancel. Sir John is shown wearing a full suit of armour, with a livery collar bearing the double 'S' symbol of a Lancastrian supporter in the Wars of the Roses.

Alicia Anne is shown in a full-length gown, with a cloak and girdle, her hair in a coif. Beside the monument, someone has put up a pair of detailed illustrations showing what each part of the armour is called, and each part of Lady Alicia's costume. It is a fascinating insight into ate medieval clothing and armour.

What is truly striking about the Anne monument is not the effigies themselves, those these are very nicely carved, but the series of 14 figures around the base of the tomb chest. These are 'bedesmen', but to modern eyes they look like nothing so much as a fanciful dwarf from the Lord of the Rings films.

The bedesmen wear long beards and carry a staff and string of rosary beads. One also carries a book in a large bag. The bedesmen figures represented those who prayed for the soul of the deceased.

It is hard to overstate just how impressive this monument is. Let me just say that I actually thought the figures of the bedesmen were Victorian additions, so beautifully preserved and detailed is the carving. But there is nothing Victorian about it; just wonderful medieval craftsmanship by an unknown sculptor.

The monument was almost certainly commissioned while the couple was still alive, at a time when they rebuilt the south aisle as a chantry chapel, and replaced all the stained glass with armorial symbols. 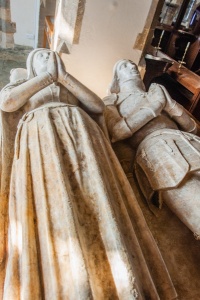 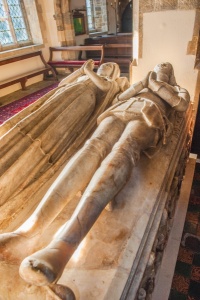 The effigies from the north 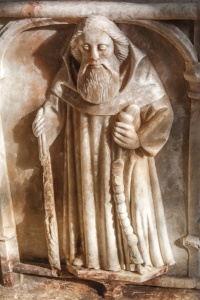 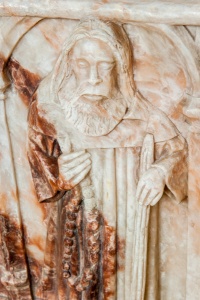 The monument was almost certainly commissioned while the couple was still alive, at a time when they rebuilt the south aisle as a chantry chapel, and replaced all the stained glass with armorial symbols. In the south chapel is a 14th-century piscina, and the font, also 14th century.

One of the font panels shows a blank shield, while the other faces are left uncarved. Several very nice fragments of medieval glass have been inserted in the upper tracery of the south chapel windows. These include several armorial symbols of the Gifford and Anne families. There are 6 roundels painted with eagles and another with a bull, representing St Luke. All these are thought to date to the period 1480-1500.

One other interior feature is a beautifully carved head, low on a pillar to the north of the chancel arch.

Outside, set into the south face of the tower, is a worn carving of a bearded figure within a niche, flanked by angels. The figure bears a shield which must originally have born the Anne family coat of arms.

I walked down to the church from the main road, following the drive to North Aston Hall, which you can just make out through trees beside the church. The location is just idyllic, and the amazing Anne tomb makes this one of my favourite churches in the area. A real treat. 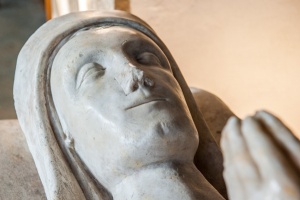 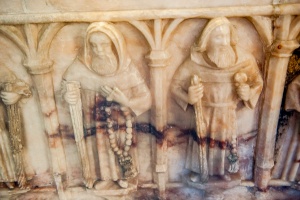 Bedesmen on the Anne tomb 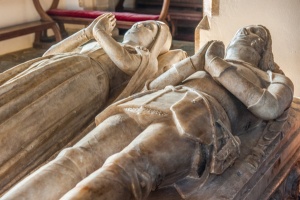 Another view of the Anne effigies 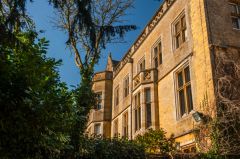 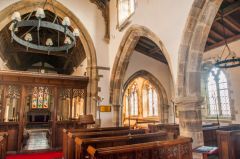 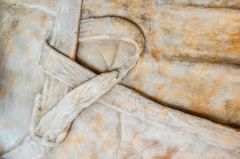 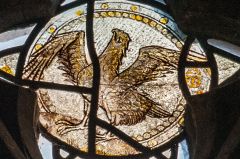 More self catering near North Aston