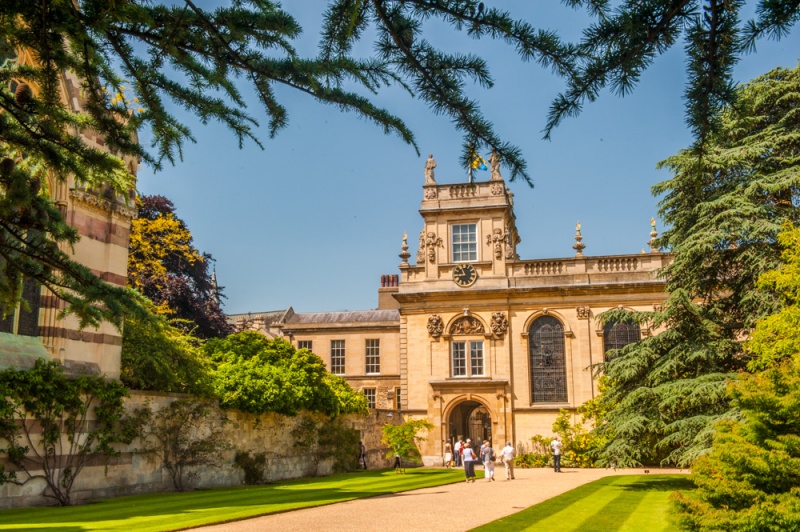 Sir Thomas Pope established Trinity College in 1555 with an eye on his eternal well-being - he wanted to ensure that he and his family would be remembered in the prayers and masses sung by college members. For that reason, the college is officially known as 'The College of the Holy and Undivided Trinity in the University of Oxford, of the foundation of Sir Thomas Pope (Knight)'. Thankfully the name is usually shortened to simply 'Trinity'.

Pope was an Oxfordshire native who rose to be Treasurer of the Court of Augmentation which dissolved the estates of the monasteries for Henry VIII. In that role, he amassed a large fortune.

Pope later became a trusted councillor to Mary I, and it was from the Catholic Mary and her consort King Philip of Spain that he received approval for Trinity College. Pope was a devout Catholic himself, and the original charter of Trinity ruled that all Fellows must be in holy orders and remain unmarried while following a monastic existence of study and contemplation.

After Pope's death, his wife Elizabeth named herself 'Foundress', though the title had no legal status. Lady Pope helped establish the ground rules for the new college, which she visited several times.

The new college was supported by the income from Pope's large endowment of lands, which paid for a dozen fellows and an equal number of scholars, under a president. A further 20 undergraduates had to pay for their tuition and accommodation. All members were required to live a strict monastic life of study and prayer. In essence, Trinity was founded as a Tudor form of monastery. 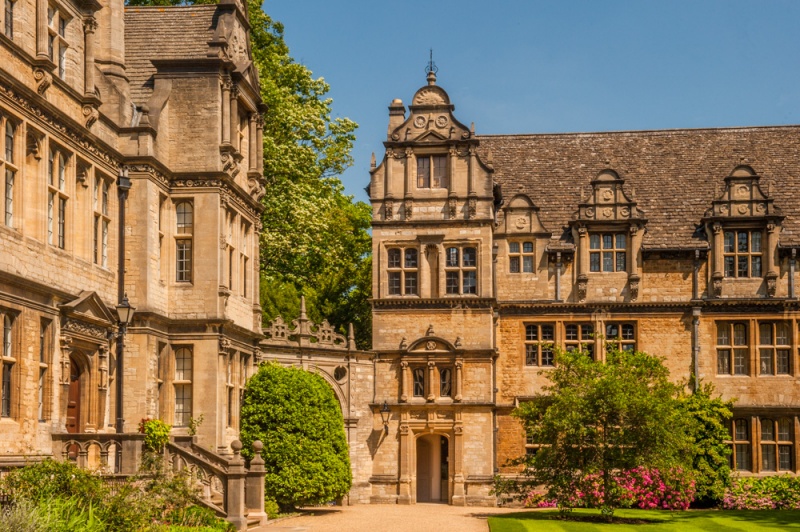 Trinity was built on the site of the earlier Durham College, which was founded in 1286 to educate monks from the Cathedral Church of Durham Cathedral. The only surviving remnant of Durham College is the old Library (1421).

When a new cellar was built under the old hall of Durham College in 1618, the hall collapsed and had to be replaced with the present building.

Trinity underwent great disruption during the English Civil War. The college supported the Royalist cause but was forced to donate their silver plate to King Charles. The silver was melted down and minted to create pennies to pay the Royalist soldiers, and the college was cleared of its Fellows and students.

According to legend, the Great Gates of Trinity College on Broad Street will never be opened until a Stuart sits again on the throne of England.

After the war ended in Parliament's favour a firmly Protestant Dean was appointed to head Trinity. The college fortunes were at a very low ebb, but it would soon revive under Ralph Bathurst, elected President in 1664 after the Restoration of the monarchy. Bathurst astutely remodelled the college accommodation so it would attract the sons of wealthy nobility.

In 1668 he had his personal friend Sir Christopher Wren build a new accommodation range, part of the Garden Quadrangle. Bathurst also rebuilt the chapel, paying for the major construction work from his own pocket. He may have designed the building himself, but he later called in Wren to alter the design.

The interior decoration includes sculpture by Grinling Gibbons and painting by Pierre Berchet. The result is a superlative example of architecture, sculpture, and painting, and is certainly one of the most beautiful chapels in Oxford.

The chapel opened in 1694 to enthusiastic public acclaim. It became a destination for tourists, including Tsar Peter the Great of Russia, who tried to visit incognito in 1695 but was recognised by the crowds and left without seeing the chapel interior.

The college is open mornings and afternoons throughout the year. Fee charged. 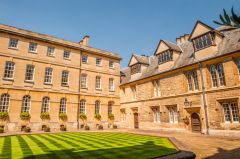 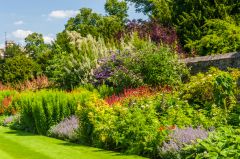 More self catering near Trinity College