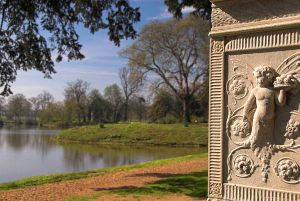 One of the great landscape gardens in England, the first major project undertaken by 18th-century landscape garden master Lancelot 'Capability' Brown. The garden was built from 1750 for the 6th Earl of Coventry and is sprinkled with classical buildings designed by James Wyatt, Robert Adam, and Brown himself.

Brown designed the park to create perfect 'pictures' from the windows of Croome House. Brown's work at Croome set the style for the next several decades of English country house and garden design, and as such it must be regarded as one of the landmarks in country house history.

The Earl and Brown struck up a firm friendship, and the Earl supported him in establishing his career. When Brown died in 1783 on his way back from visiting the Earl, the latter erected a monument to him at Croome Park, overlooking the beautiful landscape they had forged together.

The major focal point of the park is a serpentine lake, enlarged to form a pool at one end, with two small islands in the middle. Brown is supposed to have designed the lake to echo the course of the River Severn nearby.

Due to the boggy nature of the land here, Brown was forced to line the lake with clay to keep it watertight. There is a Chinese bridge, and a late 18th-century grotto which was originally studded with semi-precious stones to create a glittering, shimmering interior. Closer to the house is a walled kitchen garden.

The largest building in the park is Temple Greenhouse, designed by Robert Adam in 1760. It was made to provide a home for the Earl's collection of exotic plants. The interior was kept warm through the winter months by fires lit in a brick bothy behind the building. Hot air from the bothy was drawn into the Greenhouse through empty spaces under the floor, much like a Roman hypocaust.

A short distance away is the parish church, with monuments to members of the Earl's family. It was also built by Capability Brown, who demolished the old medieval church on the site. The church is dedicated to St Mary Magdalene, possibly as a tribute to the Earl's wife, Maria, acclaimed as one of the great beauties of her time.

There are miles of walks through the park. A new visitor centre has been created from old World War II RAF buildings. There you can see a special 'batcam', showing live video of roosting bats that have made Croome their home.

The house at Croome Park was closed for many years. It has undergone restoration and is now partially open to visitors. The house was also designed by Capability Brown, and features interiors by Scottish neoclassical architect Robert Adam. The house is in Palladian style, which was the vogue in Britain in the mid 18th century. 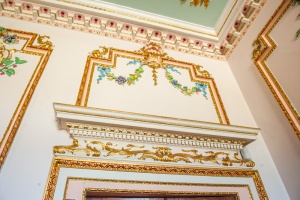 An article in a 1792 edition of Gentleman's Magazine said of Croome Park, 'Never did I see a more beautiful spot, nor any kept in such perfect order ...'

The National Trust has reopened part of the mansion at Croome. Though restoration is far from complete, staterooms on the ground floor and cellars used by the servants have been opened to the public. Do not expect to see opulent furnished rooms, for restoration is a long way from being finished, but you do get a wonderful sense of how the rooms will look when restoration work is complete.

Our visit started with a climb up the scaffolding that still envelopes much of the house. You can climb to a rooftop platform and the most unusual National Trust cafe location I've ever visited. The rooftop cafe viewing platform gives wonderful views over the landscape below and the gardens laid out by Capability Brown.

Visitor tours of the house itself start in the grand entrance hall, which features ornate plasterwork ceilings and fireplaces. This chamber was still full of construction work when we visited, but you can see enough to realise what a superb chamber it was meant to be.

There are two real highlights of the staterooms on the ground floor. The first is the long gallery, with a superbly detailed ceiling designed by Robert Adam. The ceiling as we see it today was Adam's second design after the Earl of Coventry rejected his first. The National Trust has drawings of both designs side by side so you can decide for yourself which one you like best (I preferred Adam's first design).

The second truly impressive chamber is the dining room, where restorers have recreated Adam's original gilding and colourfully painted detail of ceiling and wall panels. The effect is truly stunning, with that delicate touch of romantic neo-classical design that Adam was famous for.

It is wonderful to be able to see the house taking shape as restoration proceeds. You can see the wood panelling that lies behind Adam's remarkable interiors in several rooms, and learn the story behind the 'Lost Tapestries' that once graced the walls of Croome and are now a star attraction at the Metropolitan Museum of Art in New York. 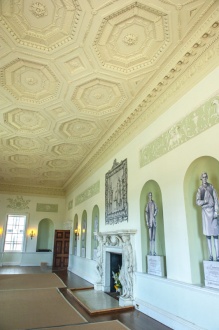 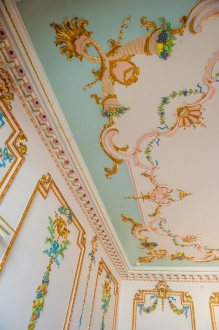 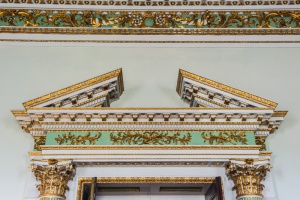 More self catering near Croome Park >>