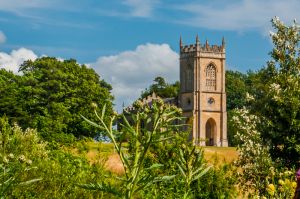 This exquisite church of warm Bath stone stands at the top of a hill overlooking the fabulous landscape gardens of Croome Park. It was built in the 1750s by Lancelot 'Capability' Brown for the 6th Earl of Coventry.

The Earl decided to replace his 17th-century house with a grand new mansion in neo-classic style. In 1758 he commissioned Brown to lay out the house and the surrounding landscape park. In addition, he pulled down the old medieval church and had Brown lay out a new church to act as an eye-catcher for his new mansion.

Though Brown laid out the church and house, the interiors are thought to be almost entirely the work of Scottish master architect Robert Adam, who finished his work in 1763.

The result is a magnificent monument to Georgian taste, with elegantly contrived Gothick windows and doors. The interior is quite wonderful, featuring Georgian plasterwork and woodwork, with craftsmanship of the highest order.

Though the church obviously served a religious function, it served equally as a mortuary chapel for the Coventry family, and the chancel is home to magnificent monuments, including quite a few rescued from the older medieval church.

The church is dedicated to St Mary Magdalene, which is thought to have been a tribute by the Earl to his wife Maria, reputed to be one of the most beautiful women of the period.

The church is under the care of the Churches Conservation Trust, but the Park and house are owned by the National Trust. Please take the time to include a visit to the mansion of Croome, and the wonderful landscape gardens. 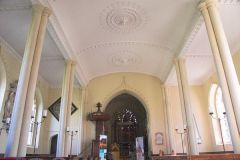 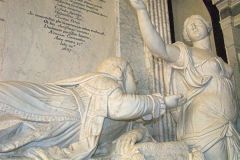 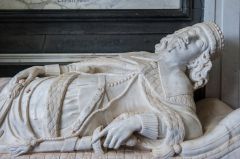