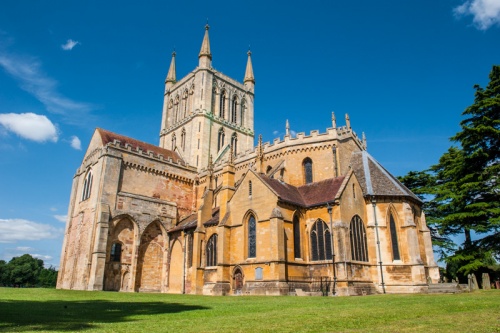 Pershore Abbey was one of the largest medieval abbeys in Britain, larger even than Worcester Cathedral. The abbey was destroyed in the Reformation, but the local residents saved the abbey church from destruction by purchasing it for their own use. The striking lantern tower dates from 1350, while in the interior the round font is beautifully carved. The interior as a whole boasts superb vaulting joined by carved bosses featuring beasts, leaf and foliate head patterns.

Sometime around AD 681, King Ethelred of Mercia granted estates at Pershore to Bishop Oswald of Worcester to establish a monastery. The monastic community was living at Pershore by AD 689.

In 972 King Edgar confirmed the abbey's charter but shortly afterwards the monks adopted the Benedictine Rule. But all was not plain sailing, for Earl Alfhere seized a large portion of the abbey lands. These lands were much later granted by Edward the Confessor to endow Westminster Abbey.

In 1002 a fire destroyed the abbey church, forcing a new church to be built by 1020. The first known burial of an important benefactor took place in 1056 when Earl Odda died at Deerhurst monastery and was brought to Pershore for burial. The next major change at Pershore began in 1090 when a new Norman church was begun to replace the Saxon building. 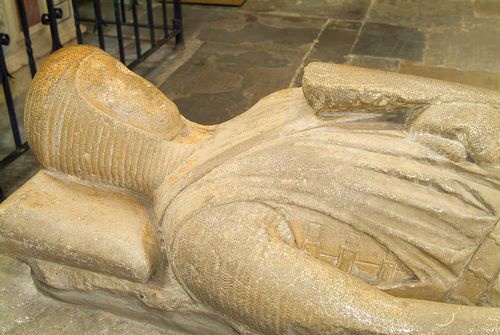 A 13th-century knight in armour

This new abbey church was completed by 1130 and is the core of the building we see today. From the early years of the 12th century, Pershore claimed to possess the relics of St Eadburh of Winchester, daughter of Ward the Elder, and the relics helped attract pilgrims to the abbey.

The abbey was troubled by fires in 1223 and 1288, necessitating major rebuilding. The tower had to be rebuilt, as did the Norman quire.

The abbey survived until the Reformation and was one of the last major monasteries to be dissolved by Henry VIII. Most of the monastic buildings were pulled down, and the stone was sold for building material. The abbey church would have followed suit, but the parishioners of Pershore came up with 400 pounds to buy the monk's quire to serve as their parish church.

The north transept collapsed in 1686, so a heavy buttress had to be built to support the tower. Another major rebuilding took place in the Victorian period, supervised by George Gilbert Scott, who removed the belfry flor to expose the traceried panelling that is one of the abbey's most beautiful features. 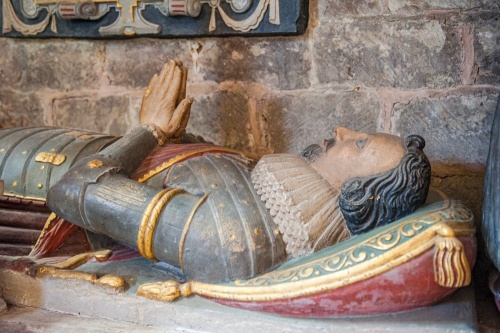 Despite the fact that the church we see today is only a small part of the original medieval building, the Abbey is blessed with a wonderful array of historic features, including some of the most attractive Early English vaulting of any parish church in England. The Norman font is beautifully carved, and in very good condition considering that it was thrown out of the church in 1840 and used for many years as a cattle trough.

There are two ornate 17th-century tombs to members of the Haselwood family; the largest is the heavily gilded memorial to Thomas Haselwood, who died in 1622. There are much older tombs as well, including an effigy of a late 13th-century knight in armour, and a very worn altar tomb of an unknown priest.

But despite the interesting historic tombs, it is the wonderful nave arcade and the exquisitely detailed vaulting of the nave and, especially, the tower, that really are the highlights of this beautiful church. You can't help but wonder how amazing it would have looked if the entire church had survived! 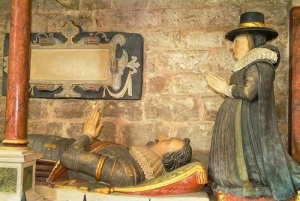 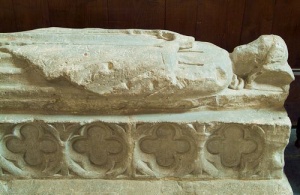 Medieval effigy of a priest 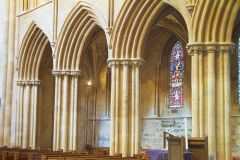 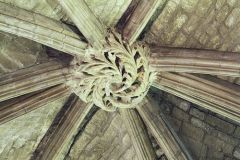 More self catering near Pershore Abbey >> 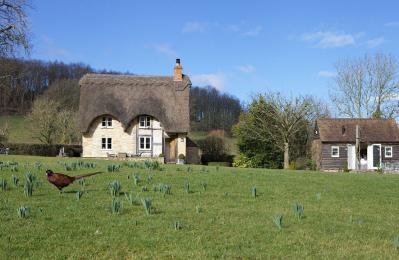 Set on the slopes of Bredon Hill in an idyllic location, this picture book stone thatched cottage retains many period features. It enjoys beautiful views and is situated on the …
Sleeps 2 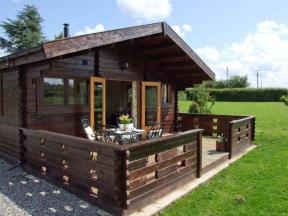