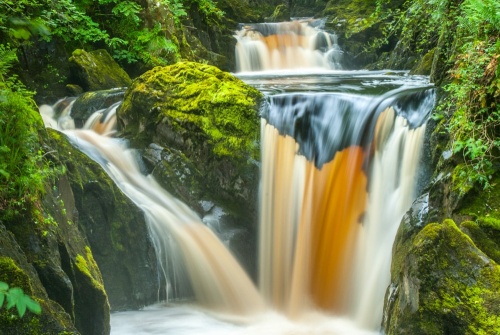 The Ingleton Waterfalls Trail is one of the most satisfying waterfall walks in Britain. The only other one I can think of to rival it is the Brecon Beacons Four Waterfalls Walk near Ystradfellte. This 4.3 miles route (7km) takes in six waterfalls of varying sizes and spectacular Yorkshire Dales landscape. The total ascent is 750 feet (227m) and it should take 2-3 hours to complete the walk.

The walk begins by following the River Twiss north from the edge of Ingleton to Twistleton Scar End, then the path diverts across open fields to join the River Doe which you follow back south to Ingleton. 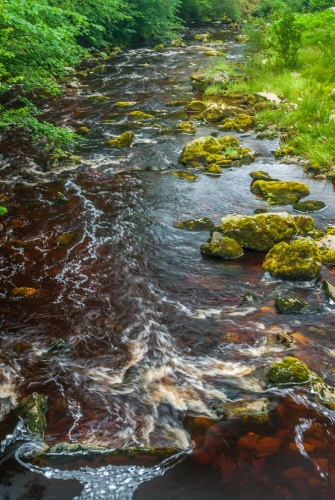 The falls are naturally more spectacular after heavy rain, but that is also when the trails are at their most muddy and slippery, so please, please wear sensible outdoor clothing and footwear.

The first section of the walk follows the west bank of the River Twiss through Swilla Glen. The steep-sided glen was formed by the action of river water cutting through layers of Carboniferous limestone since the last ice age. The sides of the glen are lush with mixed native trees such as ash, oak, hazel, and birch. Here you will find the Money Tree, a large fallen log with thousands of coins hammered into its surface. adding a coin to the Money Tree is supposed to bring good luck.

The path drops and rises up Constitution Hill and then reaches Pecca Falls, the first of the major waterfalls on the walk. 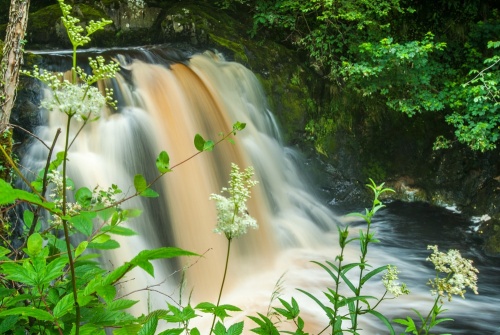 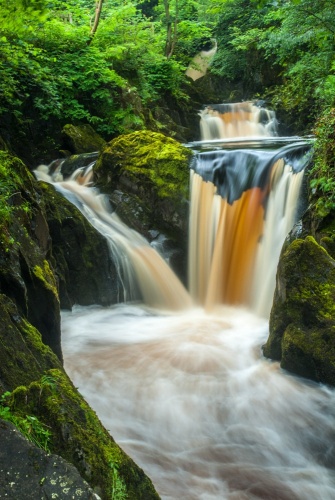 The water cascading over the falls is often brown from the surrounding peat. Pecca Falls is not one cascade but five falls in rapid succession flowing over sandstone steps down a total drop of 98 feet (30m).

From Pecca Falls the path rises and passes through a disused quarry and eventually you come to Thornton Force, the waterfall with the highest drop on the route. Thornton Force drops 46 feet (14m) over a limestone cliff. After heavy rains the sound of the falling water is a deafening roar. The waterfall is spectacular, as I'm sure JMW Turner would agree, as he painted the scene during a tour of the area in 1816. His sketch is in the Tate Britain in London.

Past Thornton Force, the River Twiss is much more peaceful. The path rises as it follows the river upstream to Ravenray Bridge. Cross the bridge and leave the river behind as you climb to the highest point of the walk on the slope of Twistleton Scar End. You pas near Twistleton Hall, cross Oddie's Lane and come to a cafe kiosk at Beezley Farm. Then the path joins the River Doe for the return journey to Ingleton. 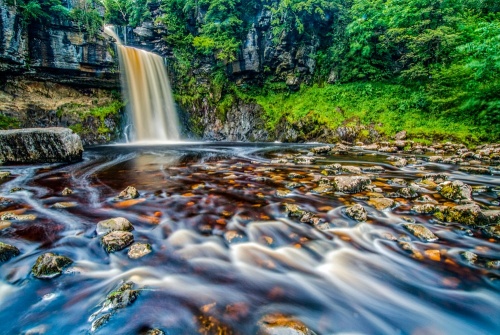 The first waterfall on this section of the Waterfalls Trail is Beezley Falls, which is really a waterfall in two parts. The first part is a striking single-drop. from there you pass through Doe Woods to the second cascade, known as Triple Spout since it has three distinct falls of water in a row.

Just below Triple Spout is Rival Falls, where the path comes very close to the river, offering you outstanding views. Raised walkways carry the trail over small rocky sections, giving you a view of Rival Falls as it plunges into a plunge pool known as Black Hole, which is said to be 80 feet deep (about 25m). 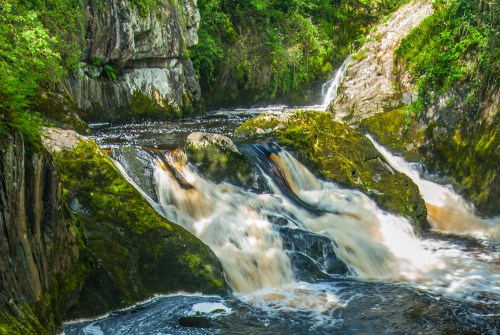 From Rival Falls you follow the trail south through Doe Glen, passing wooded outcrops of rock through Baxenghyll Gorge to Snow Falls. After Snow Falls the trail leaves the River Doe and goes through more old quarries where you can see the remains of limestone kilns before arriving back at the start of the walk and the parking area once more.

Author AW Wainwright called this 'the most delightful walk in the country', and he may be right. 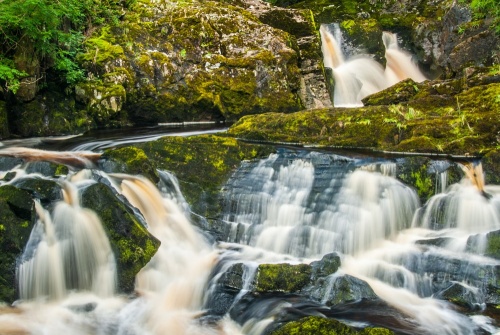 There are three options for parking. There is a pay and display car park at the start of the walk, another beside the Ingleton visitor information centre, and you might be able to find on-street parking (though don't count on it on a busy weekend). The start of the walk is well signposted for pedestrians from around Ingleton and is easy to reach.

One of the most frequently asked questions about the Ingleton Waterfalls Trail is if there is a way to take the walk without paying. The answer is no - sort of. Though sections of the route can be reached by public footpath other sections, including the main waterfalls, are on private land. The subject of whether there should be an admission fee at all is the sort of topic that gets people all hot under the collar and starts raging debates about 'right to roam', but our family just paid the fee and had a lovely walk without getting stressed about it.

Self Catering near Ingleton