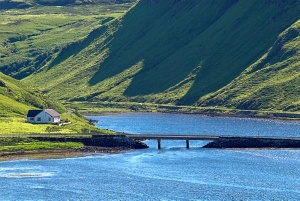 Pronounced ‘Slate’, not ‘Sleet’. This most easterly of Skye’s peninsulae has been dubbed The Garden of Skye, which might lead you to assume that it is awash with greenery and colourful flowers. While it is true that this area of Skye is more heavily forested than much of the remainder of the island, it is not noticeable colourful at first glance.

Ah! But just a short drive from the ferry landing brings you to Armadale Castle Gardens, the former seat of the powerful MacDonald clan, Lords of the Isles. Here, 40 acres of formal gardens surround the grand early 19th century ruins of Armadale Castle. The gardens date back over 200 years, but have only recently been rescued from decades of neglect, and have been restored as a showcase for plants from around the world.

You might be tempted to scoff at the idea of a temperate garden flourishing in the Scottish Highlands. But though Skye is roughly on the same latitude as northern Labrador and southern Alaska, the moderating effects of the warm Gulf Stream current means that the climate is mild, certainly by Scottish standards, creating a reasonably long growing season and plenty of opportunities for keen gardeners to put their green thumbs to work. 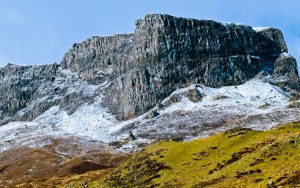 The most northerly of Skye’s peninsulae, the Trotternish is approximately 20 miles long and 8 miles wide, and within that relatively small area is some of Skye’s most spectacular scenery. The backbone of Trotternish is the Trotternish Ridge, a volcanic cliff that runs down the central spine of the peninsula from Storr in the south to just past Flodigarry in the north.

Along the way, the ridge offers unique and unusual geological formations such as the pinnacle of the Old Man of Storr, and the striking Quiraing, near Staffin. This is a good fossil hunting area, and the beaches near Staffin and Boreraig offer enjoyable opportunities for the amateur palaeontologist. It is a tough choice, but I'd have to call Trotternish my favourite part of Skye. 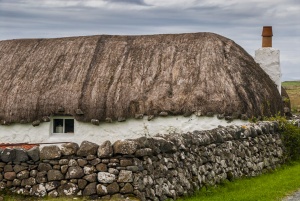 One of the smallest of Skye’s peninsulae, Waternish is more gentle than its spectacular neighbour, the Trotternish. The region begins at Fairy Bridge, northeast of Dunvegan Castle, where legends tell that a Faerie princess bid goodbye to her mortal husband to return to the Land of Faerie. Travel north and the land falls away of the broad sweep of Loch Bay, where crafting communities cluster near the shore.

Near Ardmore Point is Trumpan, where the ruined church stands as a silent reminder of two clan massacres that took place on a single day in 1587. To the southwest is Dunvegan Castle, home of the MacLeods. Take a short boat trip from the castle, into the waters of Loch Dunvegan, and see seals sunning themselves on the rocks.

North of Dunvegan, near Claigan, is the Coral Beach, a fantastic, almost tropical, beach composed of the broken remains of white coral. This area, and indeed, the whole west coast of Skye, is famous for its spectacular sunsets. 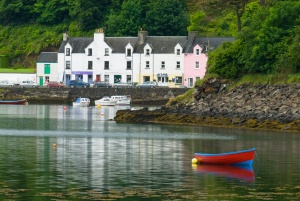 Portree is the largest town on Skye, and the closest thing to a metropolitan environment to be found on the island. But that statement is misleading, as Portree is, at heart, a quiet fishing village with colourful old buildings arranged around a lovely semi-circular harbour. The Minginish is loosely bounded by Loch Bracadale in the north and the Cuillin Hills to the south. In this area are lovely sandy beaches, an Iron Age broch at Struan, and some of the prettiest drives on Skye. To the south, Glen Brittle runs to the slopes of the Black Cuillins.

For the purposes of simplicity, I've included the Duirinish peninsula in this region. The most prominent feature of the Duirinish peninsula are MacLeod’s Tables, two flat-topped mountains which feature in several Skye legends. One version of the story tells that Alastair MacLeod visited the court of James V. There, the king snubbed MacLeod and challenged him to admit that nothing in his remote Highland estate could compare to the grandeur of the court. MacLeod replied that he could set a finer table, and light it with better candlesticks.

When James visited Skye, MacLeod prepared a banquet for him on the top of MacLeod’s Table (Healabhal Mhor), overlooking his castle at Dunvegan. The scene was lit by MacLeod’s nobles, dressed in their finest, each holding aloft a burning torch. The king admitted defeat and MacLeod won the wager.

The best place to view MacLeod’s Tables is from the road to Claigan, north of Dunvegan. Also on Duirinish is Neist Point, where an early 20th-century lighthouse is now an unusual hotel with spectacular views to the Outer Hebrides. 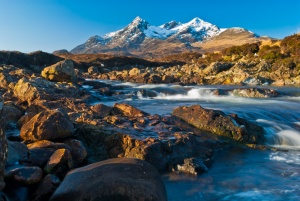 Glen Sligachan and the Black Cuillins

Most avid climbers come to Skye to tackle the Cuillins, which, taken as a group, are among the most spectacular mountains in Scotland, and offer a real challenge, even to experienced climbers. There are really two Cuillin ranges, with quite different characters. The Black Cuillins are a semi-circular group of volcanic peaks rising above the waters of Loch Coruisk in the central south area of Skye. They are best accessed through Sligachan, Glen Brittle, or Elgol, where visitors can take a cruise to the sea loch of Coruisk, in the heart of the mountains.

The Black Cuillins are based around the Cuillin Ridge, around which cluster 12 Munros (the highest of Scotland’s mountains). The peaks are composed of dark igneous rock, primarily gabbro and peridotite, and it is this dark volcanic material that gives the range the name of Black Cuillins.

By contrast, the lower Red Cuillins to the north and east are composed of red granite. Though less imposing than the Black Cuillins, the rounded contours of the Red Cuillins offer an easier challenge for less experienced climbers. The best place to access the Red Cuillins is Sligachan.

More about the Cuillin Hills >> 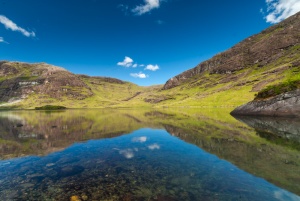 Broadford is the second largest town on Skye, after Portree, and is a good base for exploring eastern Skye and the Cuillins. There are good accommodation options in the area and some good stores catering to walkers and outdoor activities. To the south of Bradford lies the Strathaird peninsula, and the fishing village of Elgol, famous for its views to the Cuillin Hills and fabulous sunsets.

A short walk from Elgol brings you to Prince Charlie's Cave, where Bonnie Prince Charlie hid from the English. Or walk south from the ruined church at Cill Chriosd to find the remains of clearance villages at Boreraig and Suisnish. To the east of Broadford is Kyleakin, the gateway to Skye, where the Skye Bridge crosses to Kyle of Lochalsh on the mainland. The ruins of Castle Moll stand in Kyleakin harbour, and a short drive away is Kylerhea Otter Sanctuary, where you can watch for sea otters from hides along the shore.