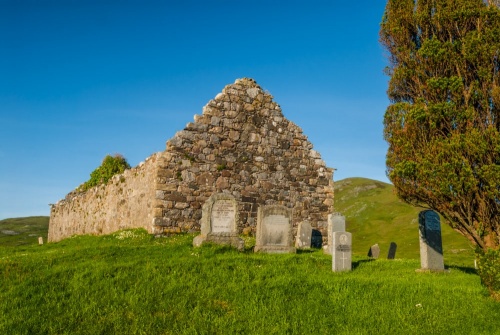 Cill Chriosd, or Kilchrist (Christ's Church), is a ruined 15th-16th century church on the minor road between Broadford and Elgol. It served as the parish church for Strathaird for over 300 years, including the clearance villages of Suisnish and Boreraig.

The first written record of a church here comes from 1505 when Kenneth Adamson was appointed chaplain in place of John MacGillivray (MacGillebredison). Since Adamson succeeded an early chaplain we can safely assume that the church probably dates to at least the late 15th century. Adamson himself only lasted 3 years in his post. 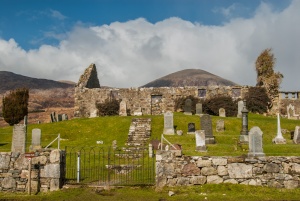 The church from the roadside

The first Protestant minister was Neil Mackinnon, appointed in 1627. Mackinnon was required to give an oath that he would tell the Clerk of Council the names of all known Catholics within the Isles.

Cill Chriosd undoubtedly replaced a much older church on this site. Parts of the older medieval building survive in the west gable of the present building. Attached to the east gable is the burial enclosure of Clan Mackinnon, marked by balustrades, and the churchyard is full of headstones from the 18th and 19th centuries.

The church was used until 1840 when a new parish church was erected in Broadford. The old building became derelict and now stands roofless beside the road.

The church is a simple rectangle, about 53 feet long and 17.5 feet wide, and the side walls are 8 feet high and over 2 feet thick. The entrance is in the south wall, where there are three inwardly splayed windows. Lying in the churchyard is a section of a crudely carved cross head of uncertain date. 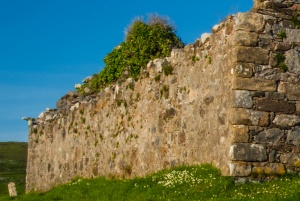 The south wall of the church

The churchyard is the final resting place of many members of Clan MacKinnon of Coirechatachan. Inside the churchyard gate is a medieval grave slab decorated with a floriated cross.

The antiquarian Rev DM Lamont records that at the turn of the 20th century there was an inscribed stone commemorating Chief Lachlan Mor, inscribed with unusual 'hieroglyphics', and another stone carved with pagan symbols, but if true neither stone survives.

Beside the churchyard is a small hillock where, according to legend, St Maelrubha held mass for the local inhabitants in the 7th century. Could it be true? Possibly, for to this day, the hill is known as 'Cnoc na-Aifhreann', or 'Hill of the Mass'. Maelrubha established the first church in this region at Ashiag, but a new church was built at Cill Chriosd in the late medieval period and the present building replaced that church.

It is very easy to find Cill Chriosd; in fact, it is impossible to miss. Just take the B8083 from Broadford, signposted to Elgol, and you will see the church on your right after about 3 miles. Across from the ruined church, a footpath leads south to the clearance villages of Suisnish and Boreraig, a very popular walking route.

I've visited Cill Chriosd several times, and I am always struck by the beauty of the setting and the sense of antiquity. This is a place to enjoy at leisure. It is rather sad seeing the roofless ruin of a once active church, but the sense of history is both poignant and beautiful, and the nearby ancient sites make Cill Chriosd a memorable place to visit. 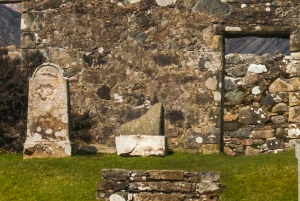 The graveyard and south wall of the church 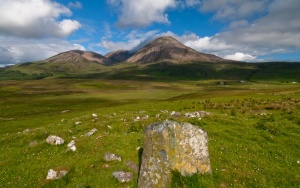 St Maelrubha's 'Hill of the Mass'

Armadale Castle Gardens and Museum of the Isles - 10.5 miles (Museum)

Nearby accommodation is calculated 'as the crow flies' from Cill Chriosd (Kilchrist Church). 'Nearest' may involve a long drive up and down glens or, if you are near the coast, may include a ferry ride! Please check the property map to make sure the location is right for you.