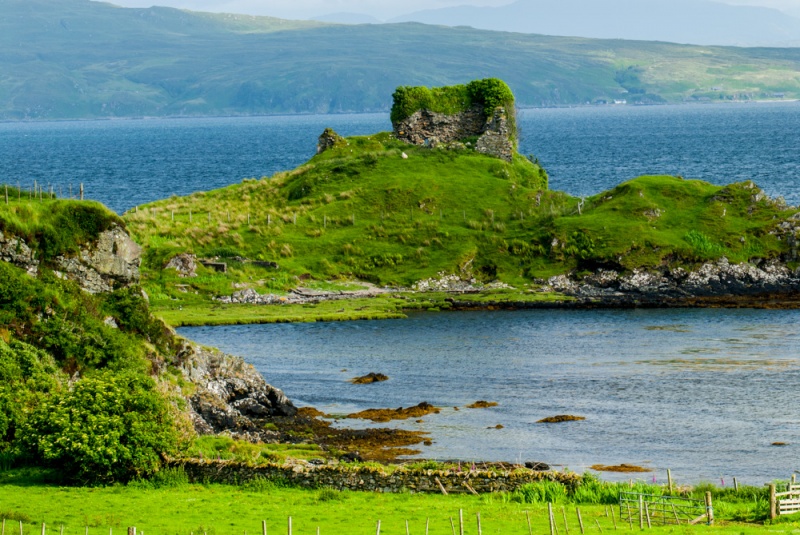 The ruins of Knock Castle stand on a rocky headland jutting into Knock Bay, on the south-eastern coast of the Sleat Peninsula. The original name of the castle was Caisteal Camus, or Caisteal Uaine, but it became known as Knock from the 17th century.

The history of the site goes back to the Iron Age, when a dun, or fort, known as Dun Thoravaig, was established on a rocky knoll. The dun took advantage of the steep-sided rocks, and created an extra layer of defence with a landward ditch across the headland.

The dun site was re-used during the medieval period for a new stronghold, probably built by the MacLeod clan. We know that the MacLeods were residing at Knock by the 14th century, as vassals of the Earls of Ross.

In the early 15th century the rival Macdonald clan took over Knock, as well as Dunscaith, on the northern coast of Sleat. In 1431 the Macdonalds rebelled against the crown and the castle was occupied by troops under James I. Alastair Crotach MacLeod, 8th Chief of Clan MacLeod, tried to recapture Knock in the early 16th century but was repulsed.

The Macdonalds forfeited their territory on Sleat in the late 16th century and in 1596 Knock was granted to the MacLeods once more, on condition that it be made available as a royal residence. The proviso was repeated in 1614 when Donald Gorm of Sleat was required to make 'the castle of Camus' always be open to the King, his lieutenants, and chamberlains.

Nothing seems to have been done to restore the castle for crown use. It was certainly never used as a royal residence, and by 1689 it was recorded as abandoned and decaying. The last written record of occupation comes from 1632 when McConnillreich signed a bond avowing Sir Donald MacDonald to be his Chief. After the castle was abandoned stone from its walls were used to build Knock Farm and other nearby buildings.

The gatehouse may be the oldest part of the castle, possibly dating to the 13th century.

The remains are composed of a main block with a projecting wing that probably formed part of a courtyard. The walls are over 4 feet thick in places, which certainly suggests that the MacLeods placed a priority on defence. The walls are built of rubble and once stood up to 30 feet high.

There is only one obvious opening in the wall; a small window in the south-east wall near ground level. The later range is 49 feet long and is 2 storeys high. There is a narrow entrance in the south-west corner. The remains appear to date from the 16th century, when the castle was in MacDonald hands.

Turf covered remains of foundation walls can be seen running parallel with the main block, showing where the courtyard once stood. At the north-east corner of the main building is evidence of a long, narrow building of unknown use.

An old legend says that the castle is haunted by the ghostly spectre of a 'gruagach', or Green Lady. The Green Lady is closely linked to the family who live at Knock. When the future looks bright for the family she is happy, but when there is trouble ahead she can be seen weeping. Another, less troubled ghost is a 'glaistig', a spirit who takes care of cattle.

It is very easy to find Knock Castle. It is easily visible from the A851 as you travel down the southern coastline of the Sleat Peninsula, south of Iselornsay. The castle stands on a headland on the northern shore of the bay and can easily be viewed from the roadside.

The last time we visited it was looking in rather sad condition, but the location is stunning, and the sense of history is palpable. Even if you don't fancy a scramble along the shore to reach the castle it is well worth stopping for a look from the roadside.

You cannot drive to the castle. If you follow the farm track leading off the A851 you will see an overgrown pathway beside a livestock gate. Follow the faint path across a small river, passing farm buildings on your left, until you reach the castle.

Do take care; the castle is not maintained and the masonry is in poor condition. Also, the sides of the headland are almost sheer, and the rocky surface can be slippery after rain. Just take sensible precautions and you should be fine.

Armadale Castle Gardens and Museum of the Isles - 4.3 miles (Museum)

Nearby accommodation is calculated 'as the crow flies' from Knock Castle. 'Nearest' may involve a long drive up and down glens or, if you are near the coast, may include a ferry ride! Please check the property map to make sure the location is right for you.

More self catering near Knock Castle