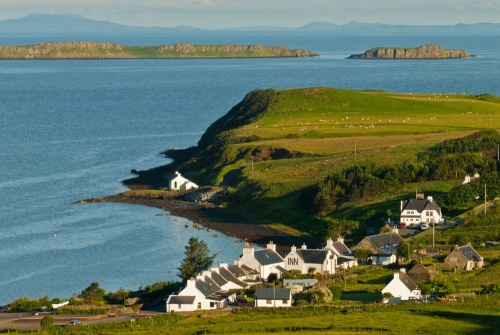 Stein is a picturesque township on the west coast of the Waternish Peninsula, looking over Loch Bay. The village was designed by Thomas Telford for the British Fisheries Society in 1790 as part of an ambitious project to create a fishing port.

The BFS was launched a few years earlier in 1786 to improve the lives of crofting families displaced by the Highland Clearances. The Society wanted to stimulate the economic recovery of crofting communities by encouraging crofters to turn to fishing.

They planned to build new roads to link model fishing villages where they would erect a few core buildings, then lease plots of land to families who would then build their own houses there.

The BFS vision was realised at Pultneytown in Wick, but at Stein the project foundered on mismanagement and local apathy, and ran out of money within a few years, meaning that only some of the buildings designed by Telford were ever built. Some original 18th-century buildings do remain, including the pier, a ruined smithy, and a storehouse (now converted into a private dwelling). 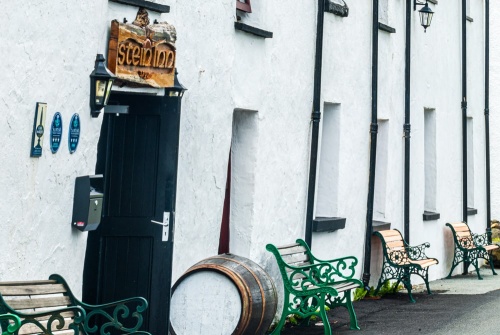 There are two places to eat in Stein, the Stein Inn and the Loch Bay Restaurant. Both are located near the pier.

The Stein Inn is the oldest inn on Skye and a former winner of the CAMRA Highlands and Western Isles Pub of the Year. The inn is reputed to be the oldest on Skye, built around 1800, possibly by Donald Maclean. Despite what you might find written elsewhere, it was not part of the original development designed by Thomas Telford.

The singer Donovan lived in Stein during the 1970s and was known to dine (and sing) at the inn regularly. 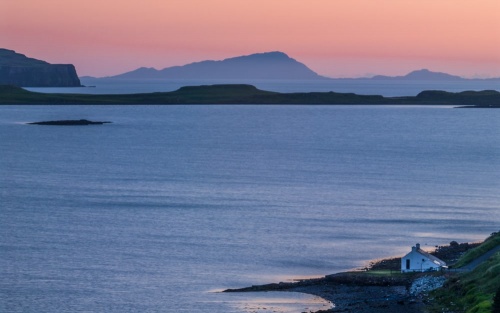 One of Stein's most popular visitor destinations is SkyeSkyns, a tannery selling sheepskin rugs and hand-knitted woollens. Take a free tour that shows how hides are tanned. Our family has taken the tour and we found it utterly fascinating to see the sheep hides being prepared. Find out more on the Skyeskyns website.

A few miles north of Stein is one of the most compelling historical sites on Skye; the ruined and roofless church at Trumpan. In 1578 a group of MacDonalds from Uist raided the Macleods of Skye. The MacDonalds found some Macleods at worship inside Trumpan Church and set a fire outside the building, killing all but one of the Macleods.

One child escaped through a narrow lancet window and ran to bring help. A force of Macleods descended on the MacDonalds, who were now cut off from their boats by the receding tide. Only one boat managed to get away, and the rest of the MacDonalds were slain.

Today the roofless ruin of Trumpan Church stands witness to one of the worst episodes of clan violence in the history of the Western Isles. 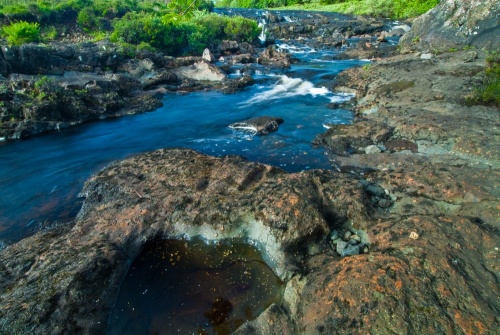 South of Stein, near the junction of the B886 and the A850, stands an old bridge across the Bay River. This is the Fairy Bridge, where, according to legend, a chief of Clan Macleod of Dunvegan said farewell to his faerie wife, who left behind a piece of magical silk fabric that became the famous Fairy Flag of Clan Macleod.

Built in 1276, Dunvegan Castle has been a Macleod stronghold for over 700 years. The castle stands amid wonderful gardens on the shore of Loch Dunvegan, where seals bask on the rocks. The medieval core of the castle has been modified over the years and what we see today is a luxurious 19th-century stately home.

Among the treasures of Clan Macleod on display is the magical Fairy Flag and Ruiaidh Mor's drinking horn, made for Sir Rory Mor (1562-1626). See a collection of Jacobite artefacts connected with Flora MacDonald, who is buried at Kilmuir. 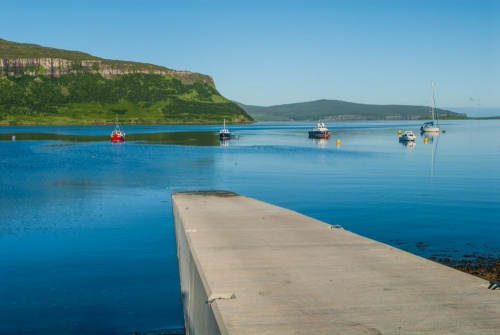 During the spring and summer months, day trips depart from Stein for the remote island of St Kilda, a 4-hour voyage to the west. You will have time for 4 hours ashore before making the return sailing. It's a long day's travel, but your reward is one of the most scenic of the Scottish islands. Note that sailings are very much dependant on weather conditions. Find out more on the Go to St Kilda website. 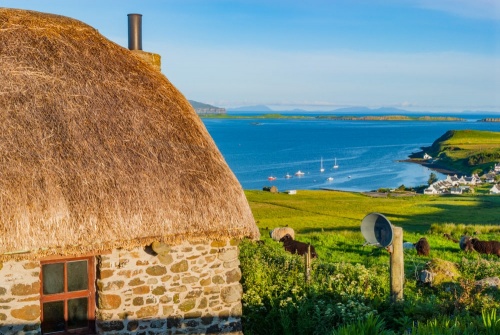 Thatched cottage looking down on Stein

If you follow the single-lane road north from Stein in the direction of Trumpan you will soon come to Hallin. On a shelf of land immediately east of the settlement is Dun Hallin, the remains of an Iron Age broch. The broch walls stand to 3.8m and there are guard chambers flanking the entrance passage. Dun Hallin is easily reached and is one of the finest Iron age sites on Skye.

Stein is a wonderful place to watch sunsets (indeed, the same can be said of most places on the Waternish Peninsula, especially Waternish Point, at the northernmost tip of the peninsula. Atop the rocks is Vaternish Lighthouse, built by the famous Stevenson family of engineers but later rebuilt in its present form. 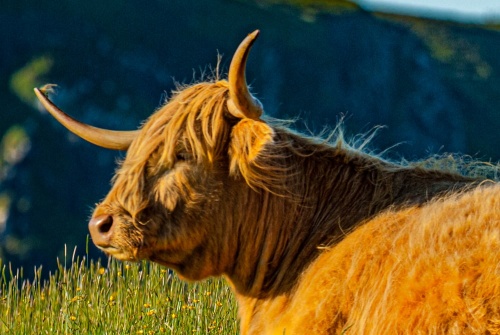 A Highland cow grazing at Stein

Stein is on the B886 about 6km (3.5 miles) north of its junction with the A850. There is parking along Macleod Terrace and at the end of the road, near the slipway.

I had the joy of spending a wonderful week in a bed and breakfast at Stein, and loved every minute of my stay. The location is simply stunning, and the sunsets were sheer bliss. What a glorious place to visit!

Nearby accommodation is calculated 'as the crow flies' from Stein. 'Nearest' may involve a long drive up and down glens or, if you are near the coast, may include a ferry ride! Please check the property map to make sure the location is right for you.

More self catering near Stein, Skye