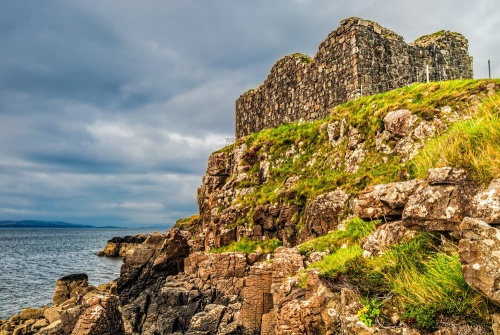 Caisteal Uisdein, better known as Hugh's Castle, is a 16th-century fortified tower house in a beautiful location looking out across Loch Snizort, on the stunning Trotternish Peninsula. Hugh's Castle is the last medieval fortress built on Skye, and it has a bloody history of treachery and murder.

The castle was erected by Hugh MacDonald (Uistean Mac Ghilleaspuig Chlerich) of Sleat, a cousin of Donald Gorm Mor, 5th Chief of Sleat, whose seat was at Duntulm Castle, further north on the Trotternish Peninsula. The late medieval period saw many clan leaders gain a reputation for violence and treachery, and Hugh was one of the worst.

Hugh MacDonald was the son of the clan chief. When his father died in what can only be described as suspicious circumstances, the clan leadership passed to Hugh's uncle, Donald Gorm, and Hugh became an outlaw. He turned to a life of piracy and cattle stealing, but after several years outside the law, he was pardoned in 1589 and given stewardship of the Trotternish region. 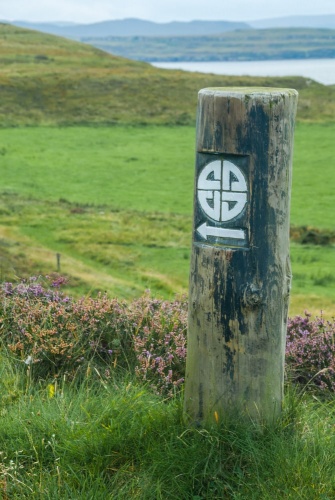 To mark his authority in the area, Hugh built a fortified house on the rocky shore of Loch Snizort Beag, south of Cuidrach.

Despite his new status, Hugh was bitterly resentful of his uncle, who he blamed for his father's death. Hugh plotted to murder his cousin and his closest allies, and invited them to visit his new fortress to celebrate its completion. Unfortunately for Hugh, the letter he wrote to Donald was mixed up with the letter he sent to the assassin he planned to use to kill his cousin.

Donald, suitably warned by Hugh's mistake, captured Hugh and threw him into the Castle Duntulm dungeon. There he was fed with heavily salted meat, and given no water. As a result, he died a horrible death, driven made with thirst.

At least, that's the usual tale. It does seem a bit unlikely that Hugh would make such a fatal mistake as to mix up the two letters. An alternative version of the story is much more believable; that Hugh tried and failed to gather support amongst the clan members to overthrow his uncle, and, as a result, was captured and thrown into prison at Duntulm.

There's no reason to disbelieve the story of how Hugh met his end; it would have been typical of the period to treat prisoners cruelly. 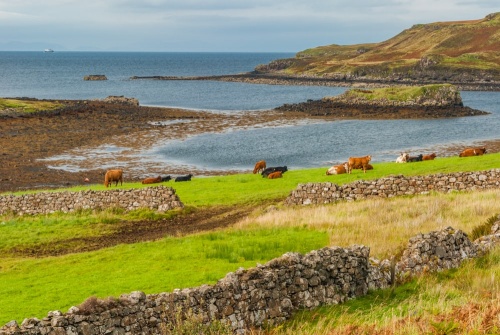 The route passes the ruins of Dun Maraig

The ruins that we see today are very simple, comprising a rudimentary tower house with walls over 2m (7 feet) thick. The layout is rectangular, measuring roughly 15 x 10 feet, with only two arrow slits admitting light to the ground floor.

There is no door at the ground level, suggesting that entry was by way of an external stair or ladder to an entrance on the first floor. The upper two floors would have had much larger windows.

The remaining walls rise to a maximum of about 20 feet high (6m). We don't know how high the original tower would have stood, but it would never have been a major fortress along the lines of Dunvegan Castle. 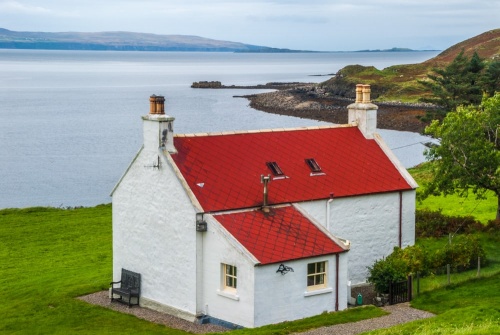 Hugh's Castle can be reached by a lovely 3-mile round-trip walk south of Cuidrach, following the coast of Loch Snizort. From the A87 coastal road south of Uig, take the single-track road signposted to Cuidrach. follow this road for about 1km until you come to the remains of an old quarry on your right, where there is room for a dozen cars to park (make sure to carefully read any posted signs about parking!).

From this rough parking area, simply walk down the road towards Cuidrach and the coast until you come to a rough track leading off to the left, marked with a green footpath sign for South Cuidrach. Follow the track, which is marked at intervals with timber posts bearing a Celtic knot symbol.

You will pass the small bay of Poll na h-Ealaidh, with the ruins of an ancient fort known as Dun Maraig on a small tidal islet in the bay. The dun can be reached by a curving causeway when the tide is low.

Keep following the shore, and the handy timber posts with the Celtic knot symbol. The ground can be boggy in places, so be sure to wear good waterproof footwear. You will see the remains of Hugh's Castle ahead of you on the cliffs above the shore.

The walk to Hugh's Castle is lovely, and our daughter, aged 6 at the time, managed it without too many complaints (that's a major success).

About Hugh's Castle (Caisteal Uisdein)
Address: South Cruidach, Uig, Isle of Skye, Highlands and Islands, Scotland
Attraction Type: Castle
Location: Park in a disused quarry on the single-track lane to Cruidach, off the A87. From Cruidach, follow the timber posts marked with a Celtic symbol along the shore, south to reach the castle ruins.
Location map
OS: NG380582
Photo Credit: David Ross and Britain Express

Nearby accommodation is calculated 'as the crow flies' from Hugh's Castle (Caisteal Uisdein). 'Nearest' may involve a long drive up and down glens or, if you are near the coast, may include a ferry ride! Please check the property map to make sure the location is right for you.