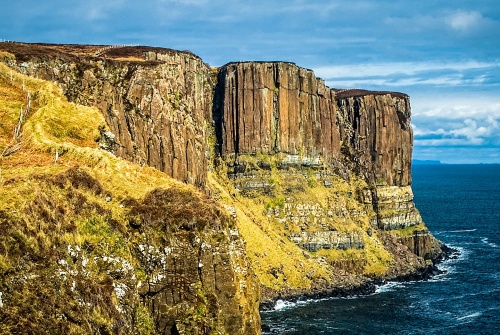 Two of the most spectacular natural attractions on the Isle of Skye can be seen from the same viewing platform, just off the A855 coastal road, at the northern end of Loch Mealt, two miles south of Staffin and 15 miles north of Portree.

The outflow from Loch Mealt tumbles over sheer cliffs and drops roughly 55m to the rocky shore below. Loch Mealt is an inland freshwater loch about 1km long (0.6m). Its eastern edge is formed by sea cliffs looking out over the Sound of Raasay towards the Isle of Rona and the Scottish mainland.

This area of the coastline acts as a nesting place for a large seabird population, and for that reason, the viewing platform and the surrounding area has been proclaimed a 'no fly' zone for drones. 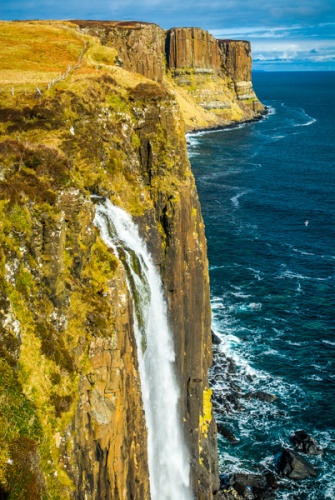 North of Mealt Falls, the dramatic coast undergoes a transformation, and you can see sheer cliffs formed of basalt columns atop a bed of sandstone. The basalt columns undulate, forming a ripple effect that resembles the pleated folds of a traditional Highland kilt, hence the name 'Kilt Rock'. If the sun is shining, you can convince yourself that the earthy colours resemble a traditional Scottish tartan.

Kilt Rock is responsible for the name of Staffin, to the north. Staffin comes from the Old Norse term 'stafr', meaning pillars, a reference to the basalt columns that make up the cliffs.

If you read about Mealt Falls online you will frequently see repeated the 'fact' that the water drops over Kilt Rock to the shore below. It doesn't. Kilt Rock is well to the north of the waterfall, but you can see both the waterfall and Kilt Rock from the same viewing platform.

Mealt Falls is sometimes confused with Lealt Waterfall, about 3 miles (2km) to the south. Presumably, the confusion arises from the similarity in the names (Mealt and Lealt). Lealt Falls is certainly spectacular, falling some 90m through a deeply wooded gorge, but of the two, I prefer Mealt Falls.

A lane turns off the A855 at Elishadder, at the northern edge of Loch Mealt, 15 miles north of Portree. At the end of the lane is a parking area and a short, level walk to a viewing platform. Be aware; the viewing platform is a popular destination during the busy summer months and can fill up quickly. We avoided this by turning up at the crack of dawn, which meant that the morning sunlight was perfect for photographing the waterfall and Kilt Rock!

Nearby accommodation is calculated 'as the crow flies' from Mealt Falls and Kilt Rock. 'Nearest' may involve a long drive up and down glens or, if you are near the coast, may include a ferry ride! Please check the property map to make sure the location is right for you.

More self catering near Mealt Falls and Kilt Rock

More bed and breakfasts near Mealt Falls and Kilt Rock