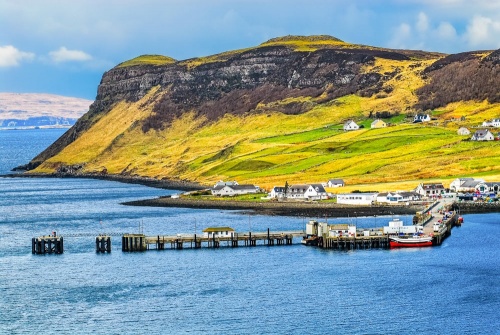 Uig is a small village on the west coast of Skye, best-known as the departure point for regular ferry service to the Western Isles. The village has a wide range of visitor amenities, including restaurants and accommodation options.

Even if you aren't taking the ferry, Uig is worth visiting for its range of attractions, including Rha Waterfall, the magical Fairy Glen, and the 19th-century tower known as Captain Fraser's Folly, which looks down on the port from its perch atop a high hill.

The name Uig comes from the Old Norse Uige, or Vik, meaning a bay, which makes perfect sense when you see how the village is arrayed around the protected, south-facing Uig Bay. 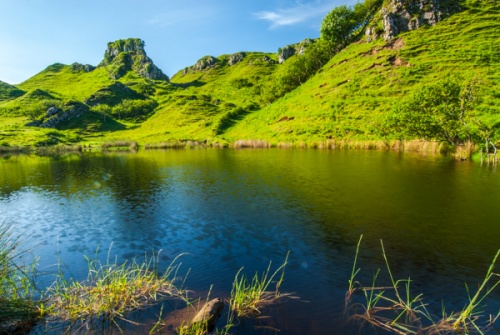 A short walk (or even shorter drive) outside Uig leads you to the Fairy Glen, a stunning landscape created by an ancient landslip that left behind fabulous rock formations. At the heart of the Fairy Glen is Castle Ewen, a natural rock formation that resembles a medieval castle. 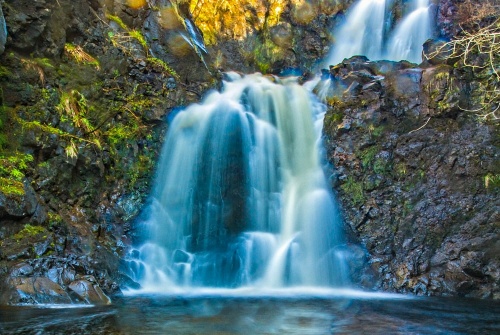 The River Rha tumbles through a steep-sided glen on the northern edge of Uig before emptying into the bay just east of the ferry landing. A short walk through lush woodland leads to Rha Waterfall, where the water tumbles over a double cascade.

Rha Waterfall forms part of Uig wood, a nature reserve under the care of the Woodland Trust. The reserve includes Shore Wood, a belt of mature woodland on the shore of Uig Bay, and Conon Wood, a densely wooded ravine that follows the River Conon inland. 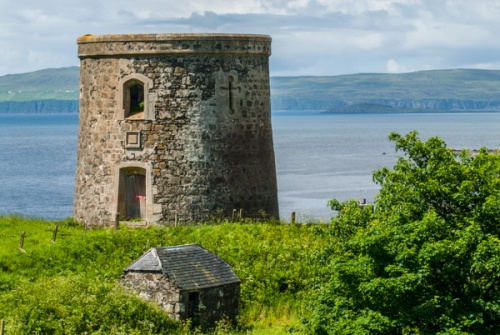 On a hill immediately south of the harbour stands a tower built in 1860 by Captain William Fraser, owner of the Kilmuir estate. The tower stands on the spot where tenants came to pay their rents.

Fraser was a notoriously hard-fisted landlord, responsible for evicting numerous tenants from their traditional crofting lands to make room for sheep. The tenants eventually rebelled and went on a rent strike. Fraser called in the Royal Navy to enforce his demands, but the tenants won out.

The tower is now owned by the nearby Uig Hotel, which began as a coaching inn in 1831. 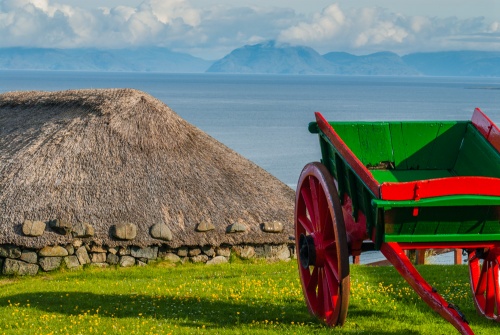 North of Uig is Kilmuir, home to the Museum of Island Life, where historical crofting cottages and workshops help preserve the islanders' traditional way of life. A stone's throw from the museum is the Kilmuir burial ground, where you will find the final resting place of Jacobite heroine Flora MacDonald.

A few miles south of Kilmuir is Kilvaxter Souterrain, an underground Iron Age passage used as a primitive form of cold storage.

At Bornesketaig a short walk along the coast brings you to the Caves of Gold, a sea cave formed of striking basalt blocks. The Caves of Gold have been called Skye's answer to the famous Giant's Causeway in Northern Ireland.

South of Uig at Cuidrach is Hugh's Castle, a 16th-century fortified tower house built by Hugh MacDonald of Sleat, who met a gruesome end at the hands of his uncle in the dungeon of Duntulm Castle. 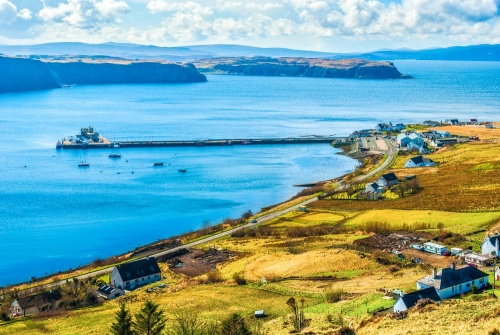 Uig is easily reached via the A87 from Portree or the A855 coastal road which loops around the northern end of the Trotternish Peninsula. There is parking at the Uig Community Hall, off the A87, and at the ferry terminal. Uig is well-served by regular buses from Portree.

About Uig, Skye
Address: A87, Uig, Isle of Skye, Highlands and Islands, Scotland
Attraction Type: Village
Location: At the junction of the A87 and A855.
Location map
OS: NG397640
Photo Credit: David Ross and Britain Express

Nearby accommodation is calculated 'as the crow flies' from Uig. 'Nearest' may involve a long drive up and down glens or, if you are near the coast, may include a ferry ride! Please check the property map to make sure the location is right for you.

More self catering near Uig, Skye