James was 16 when his father, James III, died at the hand of a mysterious assassin following a battle with rebels near Bannockburn. James had taken part in the rebellion against his father, and perhaps for that reason, he was able to initiate a period of relative peace and stability in the country. He tried to encourage trade, and had a large fishing fleet built. This helped create a hugely successful herring fishery along the Scottish coast.

A true Renaissance king, James was a patron of the arts and encouraged investigation in the sciences, music, literature, and architecture. He enacted an Education Act to encourage the study of law and Latin and took steps to end feuding among the Lowland Scot families.

Perhaps it was his love of learning that led him to take a step towards bringing Highland clans into greater contact with the Lowlanders. He learned Gaelic and visited the Highlands on a half dozen progresses in the first few years of his reign. He tried to break the traditional power of the clan chiefs by granting lands to nobles of his own choosing who were not members of the royal family. This helped create royal allies among Highland leaders.

In 1503 James married Margaret Tudor, daughter of Henry VII of England. The marriage should, in theory, have broken down barriers between the two countries and brought England and Scotland closer together. It did nothing of the sort. When Margaret's brother took the throne as Henry VIII in 1509 it issued in a new era of conflict between the nations.

In 1513 Henry launched a war against the French. The French queen appealed to James for help. James, though reluctant to involve Scotland in a war, honoured the 'Auld Alliance' with France and ordered his fleet to sea. Henry responded by declaring war on the Scots. James had no choice; he sent an army into England. The English mustered their own army under the Earl of Surrey. The two armies met at Flodden, in Northumberland, where James was killed on the field, with 10,000 of his men. Once again, Scotland's king was an infant, not even two years old. 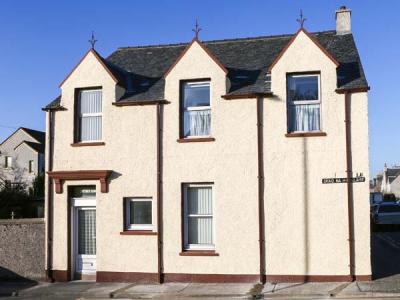 This lovely Victorian property in the town of Stornoway sleeps five people in three bedrooms.
Sleeps 5 This detached bungalow rests in Durnamuck, near Poolewe, Highlands and can sleep six people in three bedrooms.
Sleeps 6