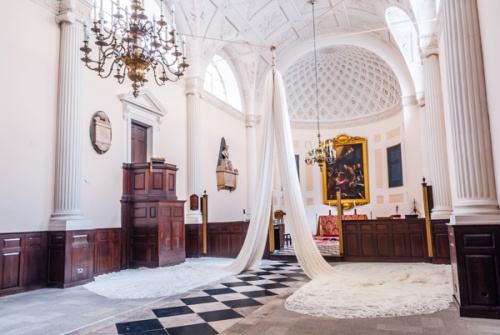 The younger Dance was only 24 when he designed this delightful little church, tucked in beside the old Roman Wall of the City of London. In the churchyard are traces of the Roman wall, indicating the great antiquity of the site. The wall runs directly under the north wall of the church nave, so the church is, quite literally, 'on the wall'. 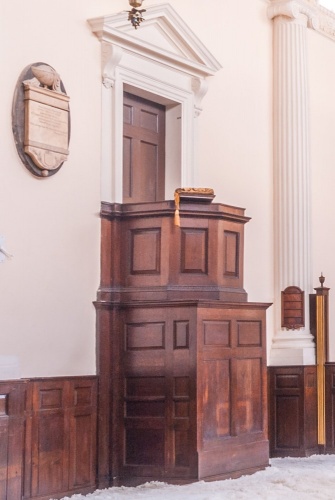 The pulpit - note the doorway 'out of London'

Dance was heavily influenced by Italian classical design in his work and went on to become a founding member of the Royal Academy, and Clerk of the City Works for London, succeeding his father in that post. He later designed the infamous Newgate Prison (now destroyed).

The church itself is understated, almost plain, on the exterior, yet deliciously airy and light inside, with fluted Ionic columns supporting the vaulted ceiling. There is a gallery at the wet end with space for the 18th-century organ. Set on the gallery facade is a painted and gilded royal coat of arms. In the north-west corner of the nave is a neo-classical 17th-century font made of white marble. 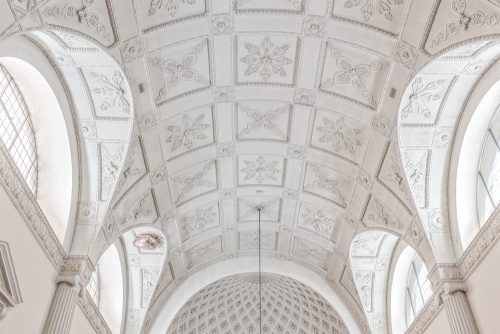 A Pulpit 'on the Wall'

The pulpit is tucked into the north wall, almost as an afterthought. One of the volunteer wardens told us that Dance may have neglected to include a pulpit in his original design and when this error became apparent he had to cram in a pulpit wherever he could. As a result, the pulpit is set directly against the wall.

In order for the vicar to ascend to the pulpit to preach, he had to go through a door in the north wall and take an external passage that linked to a stair. The stair would bring him to another door going back through the north wall to emerge in the pulpit.

The church suffered minor damage by bombs during the Blitz, but the restoration was sympathetically performed and does not detract from the overall effect of Dance's work. It was damaged again by IRA bombs in 1993 and again restored. 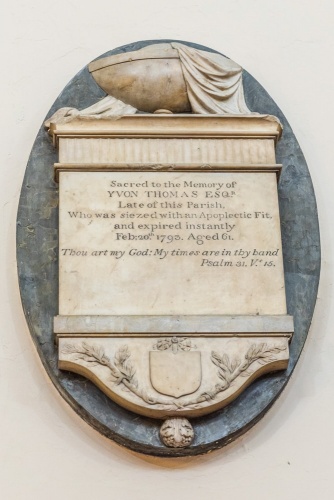 Directly beside the pulpit is a wall tablet in memory of Yvon Thomas Esq. The epitaph tells us that Thomas 'was siezed [sic] with an apoplectic fit and expired instantly' on 20 February 1793. Our friendly volunteer guide told us the rest of the story. Apparently, Thomas' apoplectic fit was brought on when he received word from his accountant that he had been assessed a large tax bill. The news of the bill brought on the fit that killed him.

Another memorial plaque commemorates Edmond Hammond (d. 1642). Hammond left money in his will to support 150 'pious uses'. Another 17th-century tablet commemorates Joan Bence (d. 1684). Her epitaph tells a tragic story; Joan and her first husband John Wood had 'several' children, all of whom died before her. 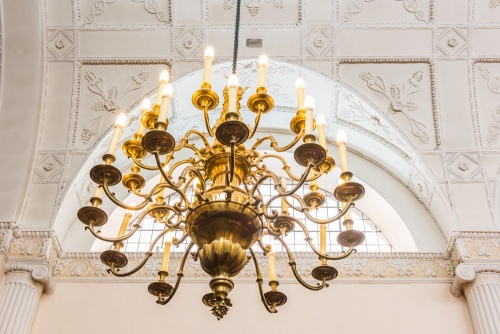 One of the 18th-century chandeliers

Like all London churches, All Hallows has a Lord Mayor's sword rest. Until 1883 the Lord Mayor would worship at each London church in turn, and each church provided an elaborate sword rest where the Mayor's official swordbearer would put his ceremonial sword of state.

Most sword rests are surmounted by a royal crown and the City of London's coat of arms. Many others have the Lord Mayor's personal coat of arms and the arms of any livery companies of which he was a member. The All Hallows sword rest has the royal crown but no royal or city coat of arms.

The first time I visited All Hallows an art exhibition was taking place, and the interior was filled with flowing lace cloth, giving the Georgian interior an almost ethereal look. The interior is not awe-inspiring, but beautifully understated, with wonderful classical columns projecting from the walls, rising up to an ornately carved barrel-vaulted ceiling.

At the east end, the rounded apse echoes the same curving lines as the ceiling. This is a lovely period-piece, with excellent woodwork and beautifully crafted 18th-century details. 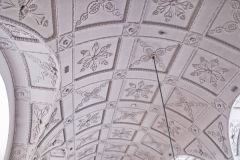 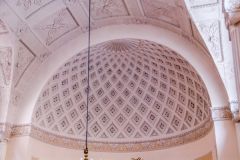 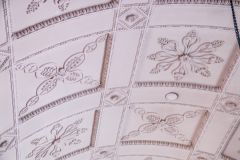 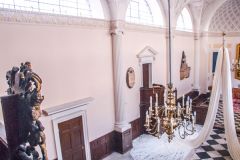 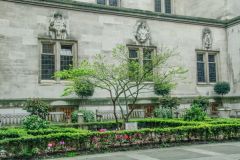 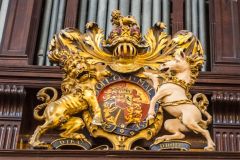 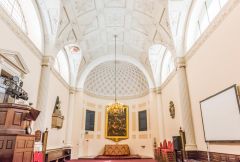 More self catering near All Hallows London Wall

More bed and breakfasts near All Hallows London Wall