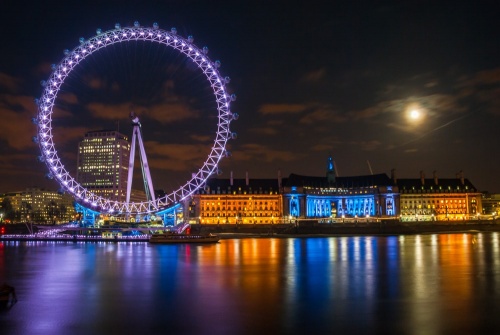 The London Eye at night

The London Eye is London's newest major tourist attraction. It is a huge wheel designed to celebrate the Millenium year 2000. It stands at Millenium Pier, on the South Bank of the River Thames, close to the south end of Westminster Bridge, and within an easy walk of the Houses of Parliament and Big Ben.

Visitors climb aboard glass-encased capsules for a leisurely circular orbit, high above the Thames, allowing spectacular views across London and far beyond. Though it looks like a huge Ferris wheel, the London Eye is no fairground thrill-ride, but a slow and stately way to experience London in a unique way.

When was the London Eye built?

The Eye was built between 1998 and 2000. It seems remarkable that a site that has so quickly become a symbol of modern London has been around for such a short time! It took fully seven years from the start of the design process to create the Eye. It was intended to stand for only a few years, but it proved to be such a popular attraction that the decision was made to make the wheel a permanent feature of the London landscape.

How long does it take to go around?

Each rotation of the wheel takes about 30 minutes, which translates to a speed of about 0.9km (0.6 miles) per hour, or approximately twice the speed of a land tortoise in top gear! In practice, this means that you get plenty of time to enjoy the view.

The view is enhanced by the capsule design; unlike traditional Ferris wheel designs that you might see at a local fairground, the capsules are not suspended under the wheel, they are set within a circular mounting ring attached to the outside surface of the wheel. What this means in practice is that travellers within the capsule have a full 360-degree panoramic view, unhindered by spokes of wheel struts. 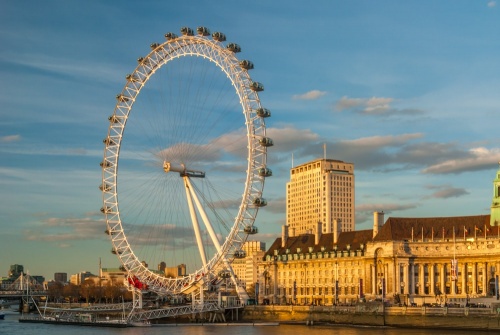 The London Eye from Westminster Bridge

How tall is the London Eye?

The London Eye is 135m (approximately 443 feet) high, making it the fourth highest building in London, after BT Tower, Tower 42 and One Canada Square. The Eye measures 424m (1.392ft) in circumference. The wheel is supported on huge A-frame legs, made up of 2200 tonnes of concrete on 44 concrete piles set 33 metres deep in the earth.

Who designed the London Eye?

The Eye was built to a design by the husband and wife team of David Marks and Julia Barfield. The Eye was created as a symbol for the end of the 20th century, and it opened to the public in March 2000. Since that time it has become the most popular visitor (paid) attraction in the UK. Over 3.5 million visitors enjoy the London Eye every year, and on a clear day, those visitors can see as far as 25 miles, or all the way to Windsor Castle. There are 32 capsules attached to the wheel, one for each of the 32 boroughs of the city of London.

Each capsule has bench seats, and its own heating and cooling system. Each capsule weighs 10 tonnes. In total, up to 800 passengers can travel in the Eye at any one time. The wheel and capsules combined weigh at a total of 2,100 tonnes. Each capsule is formed of glass panels on a steel frame, allowing maximum visibility, and is regulated by a mechanism that keeps it perfectly level at all times.

At the time of this writing, the London Eye is open to visitors all year round, with the exception of New Years Day, Christmas Eve, and Christmas Day. For current opening times and charges, please visit the London Eye website. You can book a regular 'flight' but there are a variety of special flights available, including a private capsule, or, if you're feeling romantic, a Cupid's Capsule flight, plus Champagne Flights, Mulled Wine Flights, and a Pimm's Flight. 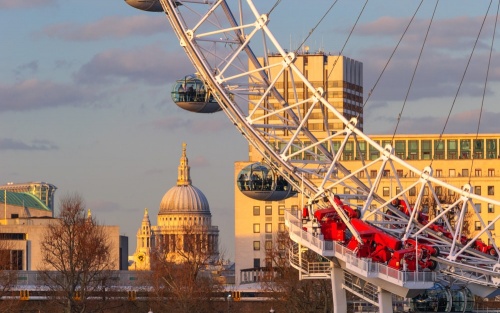 The design of the Eye is essentially a huge wheel with a hub at the centre. The hub rotates around a spindle, much like an automobile wheel revolves around an axle. The spindle has to be an enormous size in order to take the great mass of the wheel; it is 23 metres high, and the spindle and hub combined weigh in at a hefty 330 tonnes.

A popular visitor feature is the special London Eye River Cruises, which began in 2002. These circular cruises, which leave every hour during opening times, are under the care of a trained guide. They provide entertaining commentary during a 40-minute cruise along the historic River Thames, letting you see a side of London that you would otherwise miss on foot.

You will see such major attractions as Big Ben, the Houses of Parliament, St Paul’s Cathedral, Tower Bridge and the Tower of London. The boats are suitable for all weather, and there is recorded commentary in several languages. A combined ticket is available for the River Cruise and the London Eye, offering a 10% discount on the total cost.

The closest tube station is Waterloo Station. From Waterloo, follow signs for the South Bank. The closest rail station is also Waterloo.

You do not have to pre-book a flight, but it's a good idea to do so. By pre-booking you avoid queues, but you do need to specify your desired flight time if you pre-book. Plan on arriving 30 minutes prior to your flight departure.

More self catering near London Eye