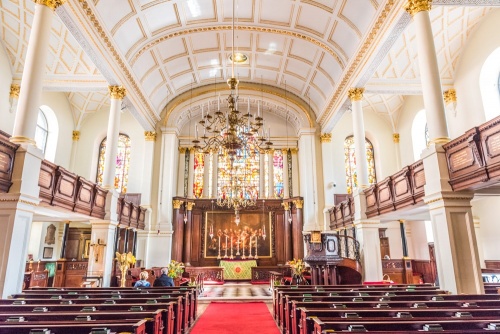 St George's Church is the parish church of the fashionable London district of Mayfair, tucked away between the bustle of Regent Street and New Bond Street and just a stone's throw from Hanover Square.

Hanover Square was built between 1716 and 1720. It was the first phase of development of the Mayfair district and part of the shift of fashionable Georgian London from the city centre. As its name suggests, the Square was named for George I, the first Hanoverian monarch of England.

The origins of St George's Church go back before the Square was built, to a 1711 Act of Parliament authorising the construction of 50 new churches to serve the needs of a growing population. A new parish was created from the western part of the existing parish of St Martin-in-the-Fields. The parish covered a vast area, stretching to Chelsea in the west and to the Thames at Pimlico. The entirety of Hyde Park was within the parish. 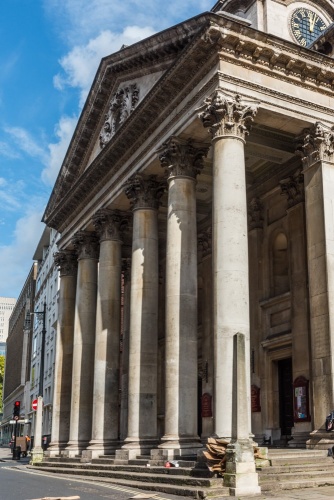 One of the first residents of Hanover Square was General William Stewart (or Steuart), who gave a parcel of land to serve as the home of the new parish church. Despite its name, the church is not actually on Hanover Square but on St George Street, which runs south from the Square. General Stewart, the former commander of Queen Anne's armies in Ireland, laid the foundation stone for the new church in 1721.

Though the plot of land was freely given, the church itself had to be paid for. To raise the necessary 10,000 pounds the government levied a tax on coal.

The new church was designed by John James, who had studied under Sir Christopher Wren. James created a stunning piece of neo-classical Georgian architecture, fronted by a huge portico facing onto St George Street. The portico is supported on six slender Corinthian columns and is topped by an elegant domed tower, above which rises a gilded weather vane. The church is 100 feet long and 60 feet wide.

The church was completed in 1725 and was officially dedicated by Edmund Gibson, Bishop of London, on 23 March of that year. 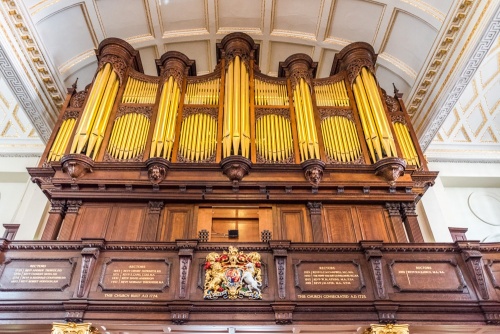 The church was renovated in 1894 by Sir Arthur Blomfield, who lowered the pews and built a new chancel with opposing rows of choir stalls. Aside from that the church is essentially unaltered and is a remarkable example of Georgian style.

As the parish church of Mayfair, the wealthiest and most elegant district of Georgian London, St George's Church was THE place to get married. In 1816 a remarkable 1063 weddings took place, with up to a dozen marriages each day.

Some notable marriages to take place at St George's include that of the Duke of Sussex and Lady Augusta Murray (1793). That marriage was declared null and void the following year. Another duke to marry here was Evelyn Pierpoint, Duke of Kingston, who married Elizabeth Chudleigh in 1769. 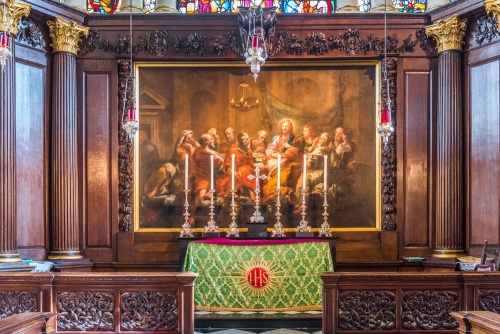 Poet Percy Bysshe Shelley married his first wife Harriet Westbrook in 1811. The marriage caused some negative comment as she was twelve years his senior. Shelley would abandon Harriet just four months later and run away with Mary Wollstonecraft.

Another famous marriage said to have taken place at St George's was that of Emma Hart and Sir William Hamilton. Emma Hamilton would later gain fame (and infamy) as Admiral Nelson's lover. Though the church guidebook claims that the couple were married here in 1791, it is equally likely that they were married at St Marylebone Church.

Statesman Benjamin Disraeli married Mary Lewis here in 1839. Another politician to be married at St George's was Herbert Asquith, who married Margot Tennant in 1894. The marriage certificate bears the signatures of four men who would at one time serve as Prime Minister; Asquith himself, AJ Balfour, William Gladstone, and Lord Rosebery.

Another politician to marry at St George's was Teddy Roosevelt, later to become the 26th President of the United States. In order to marry at the church, Roosevelt had to be a parish resident, so he took a room at Brown's Hotel in Dover Street for the requisite time period before marrying Edith Carrow. 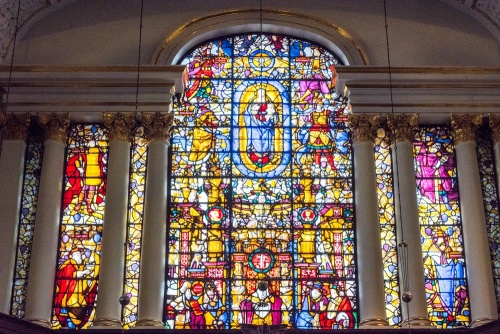 Curiously, the church had no burial ground. Those who died in the parish were buried in a graveyard beside the parish workhouse on Mount Street. That graveyard quickly filled up and a second graveyard had to be opened in Bayswater. That, in turn, fell out of use in 1854.

The lack of a burial ground beside the church must explain why the church interior is so astonishingly devoid of memorials. I counted precisely one wall tablet in the entire church, to Rev Robert Hodgson (1803-1845).

As the parish church of London's wealthiest neighbourhood, the living of St George's was a desirable one, worth £1,120 in 1891. It was so desirable that in 1774 Rev William Dodd, a chaplain in ordinary to King George III, tried (unsuccessfully) to bribe the Lord Chancellor’s wife so that she would use her influence to get him appointed to the post.

In 1914 a suffragette campaigner left a bomb in one of the front pews. The bomb exploded after evensong, causing a great deal of damage to the church but, thankfully, no loss of life.

Perhaps the single most impressive feature of St George's Church is the organ, set in a loft over the west entrance to the nave. The organ was installed in 1725 at a cost of £500. Remarkably, the three central towers of the casing are original and unrestored. The organ pipes have been replaced several times over the centuries. 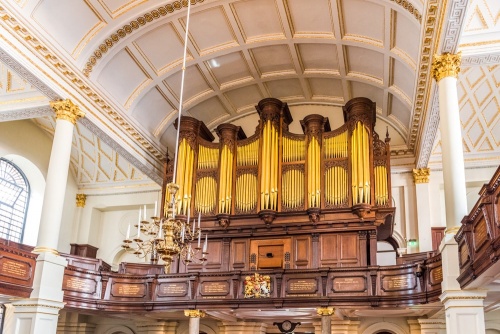 The west gallery and organ loft

Composer George Frederick Handel regularly worshipped at St George's. Handel lived at 25 Brook Street from 1723 until his death in 1759. He helped decide on the suitability of the organ and composed a theme that prospective organists were expected to improvise on. It is impossible to imagine that Handel did not perform on the organ, though the inner workings of the instrument have been completely rebuilt since his lifetime.

Handel had a private pew in the church. For the last few years of his life Handel was almost blind and scarcely able to move from the debilitating effects of arthritis, but he still made his way regularly to St George's for services.

Since 1978 the church has hosted an annual London Handel Festival to keep alive its connection with the famous composer.

Another highlight is the reredos behind the high altar. This was designed by William Kent and depicts the Lord's Supper. The altarpiece is flanked by carvings from the workshop of Grinling Gibbons. The famous craftsman died in 1720 so could not have carved the design himself, but it is certainly from his workshop. Above the reredos rises the east window, with colourful stained glass made in Antwerp in 1525. The glass was purchased by the 1st Marquess of Ely and sold to St George's Church in 1840.

The nearest tube station is Oxford Circus. From the station exit on Regent Street, cross the road and head south. Take the first right onto Princes Street, then turn left on Hanover Square. Take St George Street at the southern end of the Square and you will see St George's Church directly ahead of you on the east (left) side of the street. The church is usually open weekdays and was open when we visited. 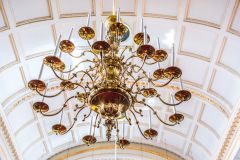 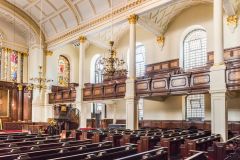 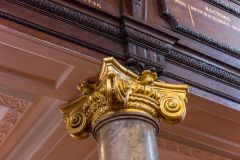