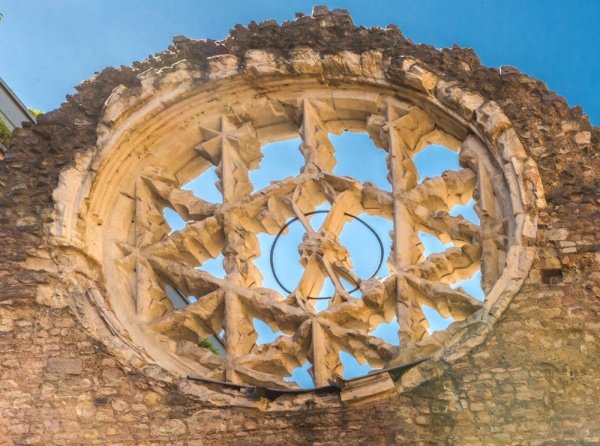 Tucked in amongst modern buildings near the River Thames in Southwark, London, stand the remains of a medieval residence of the powerful Bishops of Winchester.

Since Winchester itself was so far from London, the powerful Bishops needed a London residence, both to be close to the royal court and to administer their lands in Southwark. Historians believe that the site was used as a bathhouse before it was acquired by the Bishops of Winchester.

The Bishops ruled a large area of Southwark as a virtual private kingdom. Southwark was outside the City of London and attracted large numbers of thieves, pickpockets, and prostitutes. The Bishops licensed bathhouses called stews, where brothels operated. The Bishops also licensed the prostitutes who worked in the brothels. The prostitutes were popularly known as the 'Bishop of Winchester's geese'. 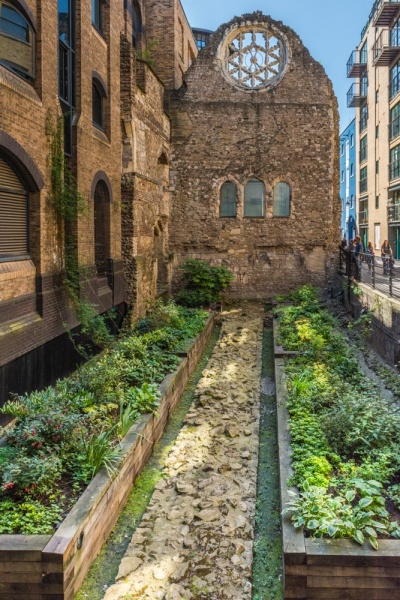 The Bishops needed a residence suitable for men of their power and influence. The first Bishop's Palace in Southwark was built in the middle of the 12th century by Bishop Henry de Blois, the brother of King Stephen.

The 12th-century complex of buildings was extended in the 13th and 14th centuries to cover roughly 6 acres along the Thames.

The Palace was composed of a great hall with adjoining buttery, kitchen, and pantry. The palace was laid out around a pair of courtyards with outbuildings including a brewhouse and a butchery. The Bishop also maintained a prison, which became notorious as The Clink Prison, with a grim reputation for poor treatment of inmates.

The Great Hall was one of the largest and most opulent secular buildings in London, stretching 80 feet long by 36 feet wide and 42 feet high. It is believed to have been built by Henry Yevele, the master mason responsible for the Bloody Tower at the Tower of London and naves of Westminster Abbey and Canterbury Cathedral. 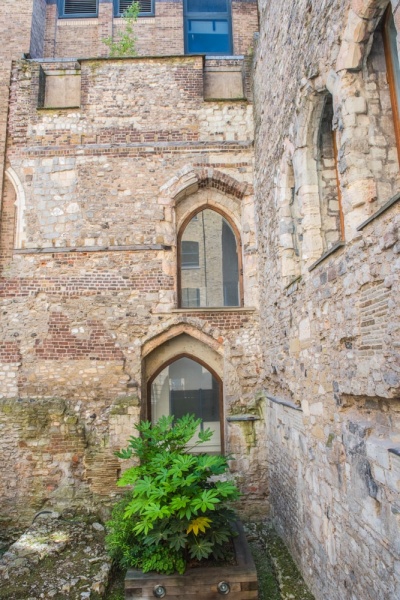 Medieval windows in the north wall

The Palace had passages leading to three timber wharves on the Thames.

The Palace was more than just a residence and an administrative centre, it was a place for the Bishops to relax and enjoy city life. Part of the Palace complex included a bowling alley, a real tennis court, and pleasure gardens.

The Palace was richly decorated, and welcomed noble visitors on several occasions. In 1406 the wedding feast of Edmund, Earl of Kent, and the sister of the Duke of Milan was held at the Palace. The most famous royal occasion occurred in 1424 when James I of Scotland and Joan Beaufort, daughter of the Earl of Somerset, held their wedding feast here. Another major wedding feast was held in 1617 when Lord Hay married Lucy of Northumberland.

But by that time the Palace was reaching the end of its useful life. In 1626 Bishop Lancelot Andrews died at Winchester Palace and after that time it seems to have fallen out of favour. It served briefly as a prison, then in 1649 it was sold to Thomas Walker of Camberwell, who transformed the once-splendid complex of buildings into warehouses and lower class tenements. 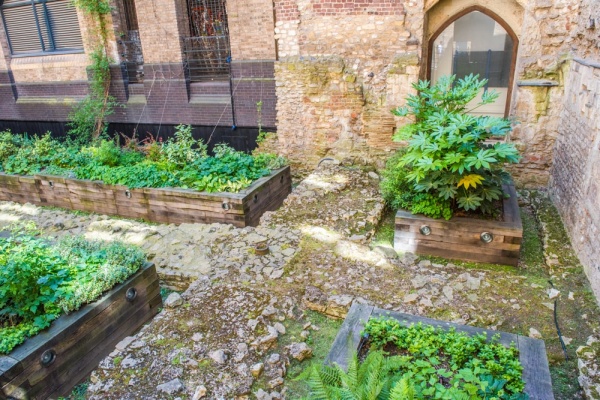 The west end of the great hall

The medieval structures were overwhelmed by later buildings and were lost for centuries until the great hall and its striking rose window were rediscovered in 1814 after a fire destroyed several nearby buildings.

Even then, it was not until Southwark was redeveloped in the 1980s that the full extent of the Bishop's Palace was revealed.

The redevelopment revealed several foundation walls and blocked arches of the Great Hall, but the most impressive feature is a superb rose window in the west gable.

Winchester Palace is free to visit at any time. The ruins are visible on Clink Street, immediately beside the Clink Prison Museum. You can's walk among the ruins but you can get very good views from a railing looking down into the Great Hall. The Bankside Open Spaces Trust has planted the remains of the Great Hall with a medieval-style garden.

Though the Palace is largely in ruins, it is still one of the very few medieval buildings to see in London. 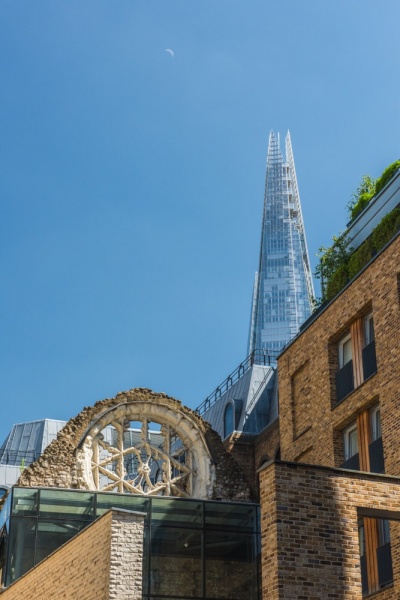 The rose window overlooked by The Shard

The Palace is very easy to reach from London Bridge tube and rail station. Just walk along Bankside in the direction of Shakespeare's Globe and the Golden Hinde and you will see the Palace remains immediately after passing the Clink Prison.