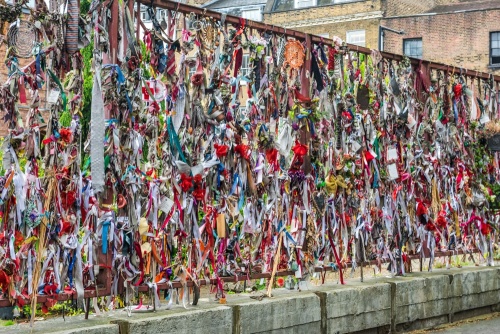 In a quiet back street in Southwark, away from the bustle of nearby Borough High Street, is one of London's most intriguing historic burial grounds. Cross Bones Graveyard is a post-medieval cemetery that was the final resting place of over 15,000 poor and destitute Londoners, among them the prostitutes licensed by the Bishop of Winchester, who controlled Southwark.

We do not know when the first burials took place at Cross Bones. The first reference to the graveyard comes in 1598 when John Stow, writing in his famous book, 'A Survey of London', mentioned a 'Single Woman's Churchyard' located 'far from the parish church'. In this context 'single woman' is a euphemism for a prostitute.

The district of Southwark lay outside the City of London and had long been a poor and crime-ridden area, part of the Bishop of Winchester's London estates. It was known as London's 'pleasure garden', an area where you could go to enjoy popular pastimes like bear-baiting, or attend theatrical performances, which were banned in London itself. 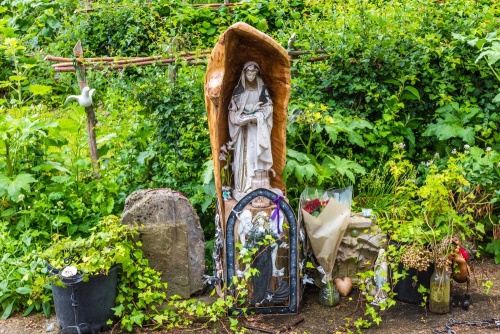 The Garden of Remembrance

It was also home to the 'Bishop of Winchester's Geese', as local prostitutes were called. The 'geese' were licensed (and taxed) by the Bishop and plied their trade in brothels, or 'stews', scattered throughout the Liberty of the Clink, the Bishop's personal fiefdom on the south-west bank of the Thames. A new euphemism entered London vocabulary; to be 'bitten by a Winchester Goose' meant to contract a sexually transmitted disease such as gonorrhoea or syphilis.

Though they were licensed by the Bishop the 'geese' were barred from burial on consecrated ground. An unconsecrated plot of land made available on what is now Redcross Way, a few minutes stroll south from Southwark Cathedral and within an easy walk of the Bishop's Palace.

Southwark's 'stews' closed in the 17th century and the area decayed into one of the worst slums in London, a breeding ground for disease and crime, a place so dreadful that policemen refused to go there.

By 1769 the graveyard was being used not only for prostitutes but for the poor of St Saviour's parish and for other unfortunates who were not allowed a Christian burial. These outcasts included large numbers of criminals and paupers, for Southwark had a deserved reputation as one of the poorest and most violent areas of the capital.

The small burial ground quickly filled to the point of bursting. Parish authorities complained that the graveyard was so full that new bodies had to be buried within two feet of the surface. The stench must have been staggering, and air pollution from rotting corpses was blamed for a cholera outbreak in the 1830s. The real culprit, of course, was the water supply but that link wasn't discovered until later. 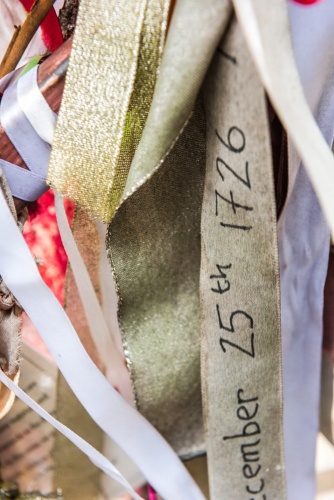 Memorial ribbons on the gates

Cross Bones became an easy target for grave robbers, bodysnatchers who dug up freshly buried corpses and sold them to doctors at Guy's Hospital in Southwark where they were used for dissection and anatomy classes.

By 1853 Cross Bones had become so overcrowded that it constituted a public health concern and burials were stopped. The land was sold as a building site, but public outcry stopped the sale. Later attempts to develop the land faced opposition from local residents, though it was used briefly as a fairground until residents complained of the noise from the fair's steam organs.

So Cross Bones decayed, largely forgotten, for another century. Then, in the 1990s London Underground proposed to build an electrical substation on the site for an extension to the Jubilee Line. Museum of London archaeologists asked for permission to excavate a corner of the site.

In six weeks they removed 148 bodies from the top layer of earth. Most of these were buried between 1800 and 1853. Over half were children under five years of age, a reminder of the astronomically high infant mortality rate in poor areas of London during the Victorian period. The skeletons, many contained in cheap coffins, showed signs of scurvy, rickets and syphilis. Of the adult skeletons, most were women aged 35 and over. 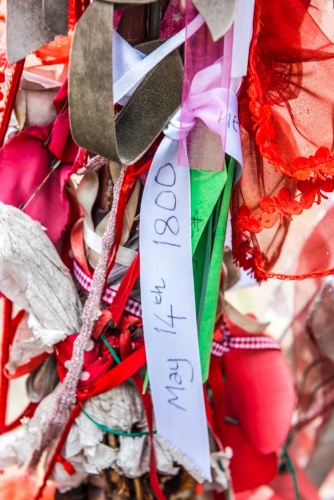 In 1996 local poet and playwright John Constable (not to be confused with the 18th-century artist of the same name!) was writing late one night when he felt himself possessed by the spirit of a medieval prostitute he called 'The Goose'. The woman began dictating a poem that would be the first of a cycle of poetry in Constable's 'Southwark Mysteries'. As Constable tells the story, the spirit guided him on a walk through the streets of Southwark, whispering poems, songs, and plays in his ear.

The experience ended at a vacant lot on Redcross Way. Constable says that at that point he had never heard of Cross Bones Graveyard. Whatever happened that night, the result was published as Southwark Mysteries, which has been performed at Shakespeare's Globe Theatre and in Southwark Cathedral.

The Southwark Mysteries launched regular candlelight vigils, processions and performances ending at the graveyard gates. Constable and other volunteers created a wild garden, with the permission of Transport for London, who own the site. This wild garden has been transformed into a Garden of Remembrance, a quiet space to sit and reflect. The garden has very limited opening hours, but you can easily see into it from the memorial gates on Redcross Way.

The awareness of Cross Bones generated by the Mysteries has prompted the International Union of Sex Workers to call for Cross Bones to be the first World Heritage site dedicated to those in the sex trade. To be clear, there is no proof that the 'Winchester Geese' are buried at Cross Bones. That tradition rests almost entirely on John Stow's 1598 reference, quoted above, a tradition that was repeated by later writers until it became established 'fact'. It is, however, perfectly plausible. 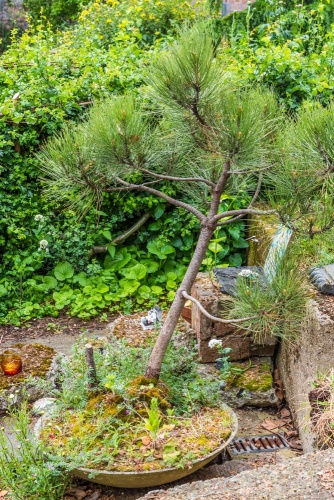 Another view of the memorial gardens

The graveyard gates have become a shrine, not only to the prostitutes buried there but to the 'outcast dead', the poor and destitute who would otherwise be forgotten. The iron gates are festooned with ribbons, many bearing a date when a known pauper was buried here. It is a touching sight, and a reminder of just how difficult life must have been for these outcasts, living on the fringes of society.

Where are the Gravestones?

Though Cross Bones is very much a historic graveyard, you won't see any headstones of other memorials. The site was utterly transformed after it was closed to burials in 1853. More importantly, most of those buried here would have been interred in a pauper's grave, with no gravestone to mark their final resting place.

The closest underground station is London Bridge. Take the Borough High Street exit from the station and cross over the street. Head south to Union Street, turn right and follow Union Street to Redcross Way. Turn right and you will see the memorial gates on your right. From the underground station, it will take no more than 10 minutes easy walk to reach the Graveyard.

Though the burial ground and garden of remembrance is usually closed, you can see into the garden easily, and spend time reading the ribbons and other mementoes of remembrance attached to the memorial gates. One block south on Redcross Way leads you to Recross Garden, a small green space established by Octavia Hill, who helped found the National Trust.